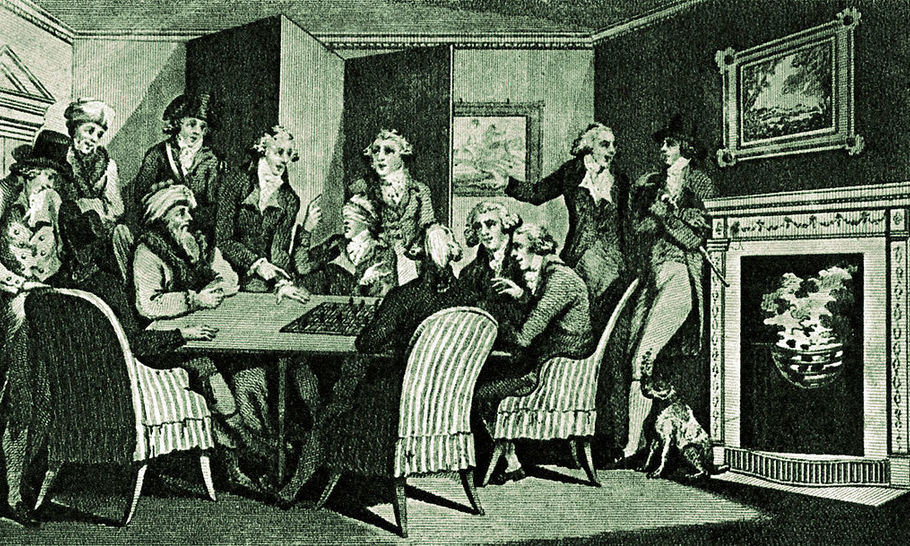 At the time of the French Revolution émigrés flocked across the channel, much as now, to the safety and civilisation offered by London. Among the escapees from the guillotine were royalty, aristocrats and even those associated with aristocrats, such as the composer and chess master, Philidor.

During his sojourn in London, while exiled from French Revolutionary Paris, the grandest chess master of his day, François-André Danican Philidor (1726-1795), shown in the engraving above, reverted to a skill he had honed in his youth, contesting a number of exhibitions, where he took on three opponents at chess simultaneously.

Playing one game at a time represents sufficient mental effort for most ordinary mortals. Philidor, however, upped the stakes by playing all three games without sight of any of the boards. In London this feat was regarded as sensational. Indeed, affidavits had to be signed by those present, because many doubted that future generations would credit such a demonstration as being possible. On the continent, however, Philidor’s act of intellectual bravado was regarded with consternation in some quarters.

The encyclopaedist Denis Diderot wrote to him, expressing fears that the mental effort involved might cause Philidor’s brain to explode under the strain.

Here is the thrust of that warning:

“I am not at all surprised, monsieur, that in England all doors should be closed to a great musician and open to a master chess player; people are scarcely more reasonable over here. You will agree, nevertheless, that the reputation of Greco [a chess player] will never equal that of Pergolesi [a composer]. If you have played the three blindfold games without concerning yourself with remuneration, so much the worse. I would be more prepared to pardon you for these dangerous experiments if you were to earn five or six hundred guineas in making them. But to risk one’s reason and one’s talent for nothing; that is inconceivable. I have spoken of it to M. de Légal, and this was his response: ‘When I was young, I dared to play a single game of chess without sight of the board; and at the end of that game, my head was so exhausted that it was the first and last time of my life. It is madness to run the risk of becoming an imbecile through vanity.’ When you lose your mind, will the English come to the rescue of your family? And do not assume, monsieur, that what has not happened yet will not happen. Take my advice, write some more of your excellent music for us, write it for many more years, and do not expose yourself again to the risk of becoming what so many are born, an object of scorn. At best, people would say of you: There is Philidor, he’s nothing any more; he lost everything he had, moving little pieces of wood over a board.’”

In The Encyclopaedia itself (1755) a more measured and admirably descriptive tone had been adopted, in a contribution not written by Diderot: “Blindfold Chess, also known as sans voir, is a form of chess play wherein the players do not see the positions of the pieces and do not touch them. This forces players to maintain a mental model of the positions of the pieces. Moves are communicated via a recognised chess notation.”

By “players“ of course, The Encyclopaedia was referring to the display giver, not the team of opponents, who had full access to sight and touch of the pieces.

Diderot himself, paradoxically, had been arrested by the French government as a result of some avant-garde theories he had expressed in his “Letter on the Blind” (Lettre sur les aveugles à l’usage de ceux qui voient). Imprisoned in the fortress of Vincennes, Diderot was permitted to retain just one book. He chose Milton’s Paradise Lost and made marginal notes using a toothpick as a pen and ink concocted from wine and slate which he scraped from the walls of his cell. Diderot was allowed one visitor and that visitor was none other than Jean Jacques Rousseau, whom Diderot had befriended while playing chess at the Café de la Régence, the Parisian chess hub, an early equivalent to Simpson’s-in-the-Strand in London.

Ignoring Diderot’s alarmist words of admonition, chess maestros continued to push the boundaries of what was mentally possible in terms of the numbers of opponents; maestros such as Morphy (Paris 1858, 8 games), Alekhine (Alamac Hotel, New York 1924, 26 games) and Najdorf (Sao Paolo 1947, 45 games). In particular, the Polish/Jewish Grandmaster Miguel Najdorf, who took refuge in Buenos Aires from the exterminating demons of Nazi Germany. Najdorf told me that he used the publicity, surrounding his mass blindfold chess displays, as a flamboyant if fruitless attempt, to reconnect with any of his numerous family members who might have escaped Hitler’s death camps. Of those displays, Alexander Alekhine’s was regarded as the most meritorious, since his score of 16 wins, 5 losses and 5 draws, came against a field that included future Grandmaster strength opposition.

Following the Diderot principle, the Soviet chess federation briefly sought to ban mass blindfold exhibitions, but with the genie already out of the bottle, such blocking attempts were doomed to failure.

Diderot was mistaken in one other respect. Although Philidor was a composer of popular operas in his day, including Tom Jones, based on the Henry Fielding novel, his musical reputation is now largely preserved by his bust on the facade of the Opéra Garnier in Paris. Contrary to the great encyclopaedist’s assertion, chess won out over music, and it is primarily as a chess player, theorist and writer that Philidor’s fame lives on.

I myself have tried my hand at blindfold simultaneous displays, and at my perihelion, once faced nineteen opponents in a display sponsored by Vicente Fox Quesada the former President of Mexico. On another occasion, at the Tony Buzan Academy, organised by The Princes of Liechtenstein, I was engaged in a display one evening, sitting on a sofa far from the boards, trying to focus, with my eyes firmly closed.

At that point an Australian artist in residence (who shall here be nameless) wandered past where I was seated and screeched out (imagine an Aussie accent here:) “Yer silly old possum, if yer tired you should go to bed!”

Next day at the Tony Buzan Academy debrief, Professsor Giselehr Guttman of the Psychology Department of Vienna University, released his findings. He had wired me up during the display to monitor my brainwaves. Now imagine a heavy, professorial German accent:

“My friends, the chess experiment with Grandmaster Keene, in which he won all the blindfold games, has produced four conclusions. Conclusion number one: during the display Mr Keene’s brainwaves were remarkably even; conclusion number two: they only spiked when he was disturbed by being offered a cup of coffee, handed a message, or shouted at by a passing Australian lady; conclusion number three: Mr Keene is the fastest person I have ever measured to activate his brain from a relaxed state, and also the fastest person to achieve a relaxed state from previous high activation. And the fourth and final conclusion: never try to give a statistical lecture, using a yellow graph on white paper!”

Reverting to more ambitious assaults on the Everests of mental achievement, the astonishing Guinness World Record for Simultaneous Blindfold Chess is now held by Grandmaster Timur Gareyev who faced 48 opponents, scoring over 80 per cent (the valid minimum score) while riding an exercise bike! The record was sealed on December 4th, 2016 in Las Vegas. It took 23 hours, during the course of which Gareyev cycled fifty miles. In his spare time he is a skydiver and has appeared on magazine front covers holding a magnetic chessboard, while plunging from the skies.

I have seen the games. Considering that Gareyev was on an exercise bike at the time and facing a world record beating number of opponents, the games are remarkably tactical, aggressive and calculation intensive.

When asked how he accomplished his feat, 16 times greater in magnitude of opposition than Philidor’s, Gareyev indicated that he had actively employed such memory techniques as The Roman Room, or Memory Palace. This method was popularised by the Benedict Cumberbatch Sherlock Holmes TV series and proselytised by the late Tony Buzan, originator of the World Memory Championships, along with Dominic O’Brien, himself a record-breaking eight times World Memory Champion.

The exercise bike element may seem at first sight eccentric. It brings to mind the weird decision by Tony Miles, the British Grandmaster, to play all his games at one Tilburg tournament in Holland, lying flat on his stomach on an operating theatre portable trolley. I can see no particular benefit in this prone angle of play. In contrast, the advantages derived from using the bike might include enhanced oxygenation, synchronisation with brain waves and the creation of a regular physical rhythm that could be helpful in mirroring the ebb and flow of the moves in a simultaneous chess display.

My conclusion is that Gareyev’s extraordinary record, of which memory is only a part, calculation, strategy, stamina, tactics and vision also being vital, demonstrates beyond a doubt that the human brain, with proper exercise and nutrition, is capable of feats as yet unimagined. As the Roman poet Juvenal wrote: “Orandum est ut sit mens sana in corpore sano” (You should pray for a healthy mind in a healthy body).

For those interested in improving their mental faculties and memory power, I recommend Dominic O’Brien’s excellent treatise “You Can Have An Amazing Memory”.