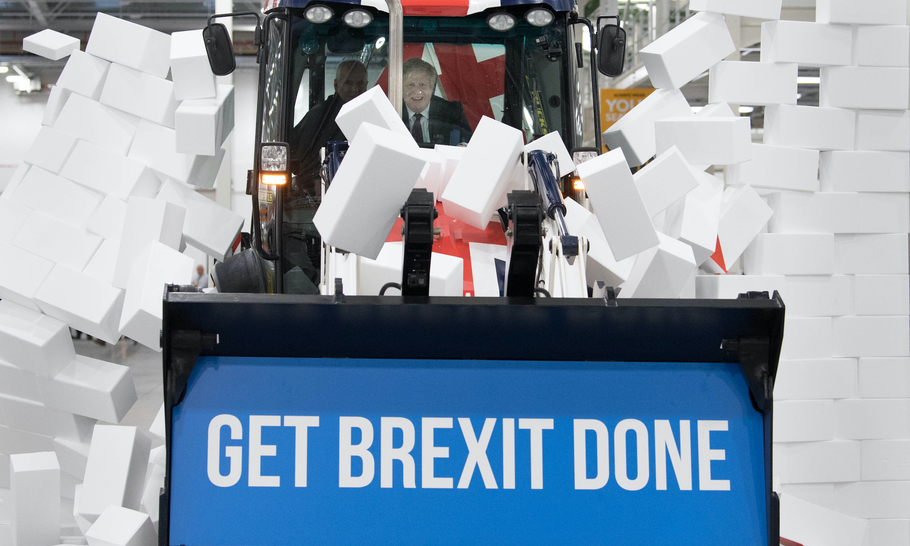 Addressing an audience in Kent, Johnson, then Mayor of London, tells the crowd: “I think we can strike a deal as the Canadians have done based on trade and getting rid of tariffs. It’s a very, very bright future I see… The only thing we have to fear is fear itself. I think there is a huge opportunity. Do free trade deals, believe in ourselves.”

“I think the prospects are win-win for all of us.”

Johnson gives an EU referendum campaign speech — “We will trade as much as ever before, if not more [when Britain leaves the EU]. We will be able to love our fellow Europeans, marry them, live with them.”

In remarks reported in the Telegraph, Johnson says that leaving the EU without a deal on Brexit would be “perfectly OK”.

Now Foreign Secretary, Johnson delivers a speech to Conservative Party Conference: “Every day a distinguished pink newspaper manages to make Eeyore look positively exuberant, and across the world the impression is being given that this country is not up to it; that we are going to bottle out of Brexit and end up in some dingy ante-room of the EU, pathetically waiting for the scraps but no longer in control of the menu.”

In a speech, Johnson says: “To those who worry about coming out of the customs union or the single market — please bear in mind that the economic benefits of membership are nothing like as conspicuous or irrefutable as is sometimes claimed.”

In a leaked recording, Johnson, still Foreign Secretary, is heard saying, “You’ve got to face the fact there may now be a meltdown. OK?… [Brexit would be] “irreversible” but the “risk is that it will not be the one we want.”

Johnson resigns as Foreign Secretary. In his resignation speech, he says: “No one on either side of this house or anywhere wants a hard border [across the island of Ireland]. You couldn’t construct one if you tried… There can be checks away from the border and technical solutions.”

Johnson gives his first speech as Prime Minister: “The doubters, the doomsters, the gloomsters — they are going to get it wrong again. The people who bet against Britain are going to lose their shirts… and we will do a new deal, a better deal that will maximise the opportunities of Brexit while allowing us to develop a new and exciting partnership with the rest of Europe, based on free trade and mutual support. I have every confidence that in 99 days’ time we will have cracked it.”

Johnson gives his first conference speech as PM: “Today in Brussels we are tabling what I believe are constructive and reasonable proposals which provide a compromise for both sides. We will under no circumstances have checks at or near the border in Northern Ireland. We will respect the peace process and the Good Friday agreement.

“If we fail to get an agreement because of what is essentially a technical discussion of the exact nature of future customs checks, when that technology is improving the whole time, then let us be in no doubt that the alternative is no deal. That is not an outcome we want. It is not an outcome we seek at all. But let me tell you, this conference, it is an outcome for which we are ready”.

In a speech later that month, Johnson tells Parliament: “And that is why it is now so urgent for us to move on and build a new relationship with our friends in the EU on the basis of a new deal — a deal that can heal the rift in British politics, unite the warring instincts in us all.”

In his Prime Ministerial written introduction to the Queen’s speech, Johnson writes: “Our first task is to get Brexit done and we will leave the EU at the end of January. As I said many times over the course of the election campaign, we have a pre-cooked Brexit meal ready to pop in the microwave — and we will bring it before Parliament this week.”

At a speech given in Greenwich, Johnson says: “The choice is emphatically not ‘deal or no-deal’. We have a deal — we’ve done it and yes it did turn out as I prophesised to be oven ready. The question is whether we agree a trading relationship with the EU comparable to Canada’s — or more like Australia’s.

And I have no doubt that in either case the UK will prosper.”

Johnson gives a statement on Brexit negotiations: “We’re willing to discuss the practicalities with our friends where a lot of progress has already been made, by the way on such issues as social security, aviation, nuclear co-operation and so on…

“But for whatever reason, it is clear from the summit that, after 45 years of membership, they are not willing, unless there is some fundamental change of approach, to offer this country the same terms as Canada. And so with high hearts and complete confidence we will prepare to embrace the alternative.”

Speaking to Sky news Johnson says, “I’ve got to tell you, it’s looking very very difficult at the moment… but the key thing is that on January 1, whatever happens, there’s going to be change, and people need to get ready for that change.”