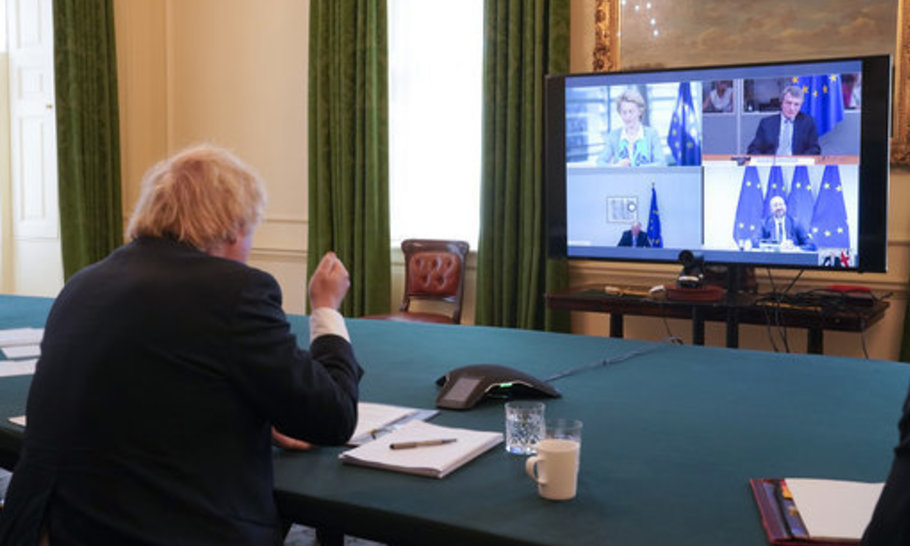 “Crikey, Ursula. A German, an Italian and even a Belgian against a single Englishman. That’s fixing the odds a bit.”

“Well, prime minister, there’s also Michel Barnier. You’ll remember him. He’s the Frenchman who gave you the deal last autumn that allowed you to win the election.”

“Bonjour Michel. I hope you’re over your bout of Covid-19. I am not sure I am. Plus a new baby keeping me awake all night long. Now where are we.”

“Prime Minister, you requested this Zoom meeting. I am here for the Commission, as is Michel. But we decide nothing. It is 27 heads of government who make the decisions. And then the MEPs in the European Parliament have to agree any deal or partial deal and as there is no longer a majority in the European Parliament for any one party, it is going to be tricky to get everyone on board.”

“Yes, yes. But we have to crack on. I need a deal this autumn. This can’t drag on into 2021. Excuse the English but it is time Michel and his boys pulled their fingers out.”

“I agree and we had the outline of a deal in the Withdrawal Agreement and the Political Declaration. But your nice Mr Frost seems to think neither is valid any longer even if they are in UK laws.”

“Don’t worry about David. Let’s deal with this mano à mama as it were. I just want a deal I can win votes with. I have already ordered that there will be no customs checks in Dover. Surely that shows willing.”

“That’s because you have made no preparations for the massive paperwork and obligatory checks on goods and food going between two economic entities — the EU and the UK — which no longer share a common rule book. We will maintain checks on our side, especially if your trade minister says foods treated with hormones and chemicals in America can be imported into the UK. Our standards are much higher and our consumers will want to know anything coming in from Britain does not undercut our enforceable rules and standards. There are going to be very long lorry queues in Dover and Folkestone to get back into Europe.”

“OK, OK we’ll have to look at that. But at least we want to get Brits back holidaying on the continent. Starting up the 73 million flights every year to Europe.”

“We all want that Prime Minister. But you are saying you won’t accept EU rules on data protection. That means if one of your citizens emails a hotel for a booking it will be illegal to reply if you won’t abide by the same rules.”

“Yes, but we can’t have the European Court of Justice dictating to us. Parliament won’t stand for that.”

“Prime minister, Michel Barnier has made clear the ECJ will interpret EU law, not UK law. If you don’t want to abide by common data rules, that’s up to you but the ECJ won’t allow us to expose EU citizens to having personal data accessed by any malevolent forces in Britain. It’s your call.”

“You have to give me my 200 miles around Britain for British fishing boats.”

“Prime Minister, Charles Michel here. I was PM of Belgium which also has fishing boats as have seven other independent EU coastal states. We and you and the French have been fishing in these waters for centuries. I’d leave the fishing communities to sort this out as they do each year under the existing system. If you send the Royal Navy out like in your cod wars with Iceland to threaten our boats it won’t go well. Emmanuel Macron is not on this call. But he has made clear he cannot sell out les pecheurs français and expect to be re-elected as president of France.”

“Well surely we can do something Ursula, anything ?”

“Yes, keep talking. We think it would have been smarter just to extend the talks as trust all three of us, everyone in Europe is 200 per cent focused on defeating the medical threat of Covid-19 and then getting our cruelly damaged economies on their feet. I don’t mean to be unkind but you have implemented your referendum and left the EU but don’t seem satisfied with that. We are not Brits. Only you can decide what to do. No-one is paying attention to Brexit in any of our capitals or parliaments. We are happy to keep talking and maintaining the status quo so that East Europeans can come and pick your fruit and vegetables or work in your care homes and hospitals. But Mr Frost seems to belief in the maxim of avoir le beurre et l’argent du beurre which I think you call having your cake and eating it. Sorry but we are happy with our rule-book and much as we like Britain and wish you well we cannot give you’re the special status you are asking for.”

“OK, Ursula, Merci, danke. I’ll talk to Dominic and see what I am allowed to do.”