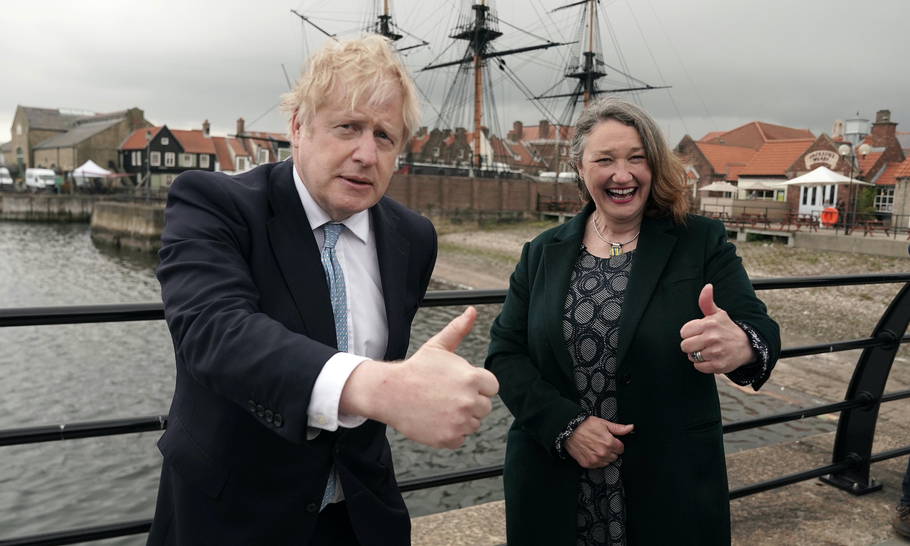 Boris Johnson with MP Jill Mortimer in Hartlepool, May 7, 2021.

Britain is a one party state. It’s a great shame, not least because the party in question, the Conservative Party, is little more than a worn-out husk. Like the man who leads it, the Conservative Party is devoid of ideas. It has no agenda except its own self-promotion. That vacuum is now a threat to the country.

There are three main reasons for the ascent of the Conservative Party and for its current dominance. The first is that Boris Johnson has no real political beliefs. This gives him a very significant political advantage. If you believe in nothing, then you are not bound by any moral or political framework. That cuts you free to do and say whatever you want and because there is no political credo with which your pronouncements or acts can be compared, then charges of inconsistency or hypocrisy won’t stick.

Johnson is, in this sense, just like Putin. There is nothing there. No ideas or beliefs, and certainly no shame — none of that. And because of his willingness to do anything — because of his cynicism — the man who believes in nothing is the perfect candidate for high office.

He is also a blank slate, onto which the electorate can project whatever they want. Johnson is a classic of the type. Ask yourself, what is Johnsonism? What has the PM ever said, specifically, that suggests a coherent set of inner political convictions? The answer is that he’s never said anything of the sort, because he has no such convictions. Everyone knows it. Johnson and the current Conservative Party have a stranglehold on British political life because they don’t really believe in anything. This means they will do and say anything they think the public wants to hear in order to get power. No other British political party has found a way to challenge this.

The second reason that Britain has come to be dominated by a single party is the Covid pandemic. It has been impossible for Labour to mount any significant assault on the Government during the crisis. The vaccine rollout has been a success. Johnson has managed to see off calls for an immediate Covid inquiry. That will change when the focus shifts from the efficacy of the vaccine roll-out to Britain’s extraordinarily high death rate. At some point, Johnson will have to answer for that, but it seems a long way off.

The third reason we are in a one party state is Corbyn. By picking him as its leader, the Labour Party broke its link with its traditional voters, who were horrified by what he represented. Corbyn and his supporters managed to repel hundreds of thousands of former Labour voters at the last election with their offering of shrill hyper-progressivism. Corbyn’s core message to the British people was that he disapproved of them. Is it any surprise that the electorate ran a mile? The result was a colossal Conservative surge in areas of the country that had traditionally voted Labour.

Nihilism, Covid and Corbyn are the three pillars of our current one party state. They are the reason why, despite one of the highest Covid death rates in the world, despite the unseemly nest-feathering in Number 10, despite the dodgy contacts with big business — despite it all, Johnson still leads Starmer in the polls by a double-digit margin.

And yet, Johnson is now heading for the greatest political test of his leadership — Scotland. It is going to require a very subtle political operation to keep Nicola Sturgeon from bringing about a second Scottish independence referendum. Were a vote to go ahead, the likely outcome of that referendum can be measured in the Westminster Government’s determination to stop it happening.

The Prime Minister now faces an opponent much more dangerous than any he has faced in the Commons. But Johnson is not a man used to differences of opinion. He got rid of all the dissenters in his own party, withdrawing the whip from twenty-one backbenchers who went against him on Brexit. When Sajid Javid, the then-Chancellor, disagreed with the PM over staffing at the Treasury, Johnson got rid of him too. These are the sorts of thing you can do in a one party state.

But that stridency won’t work when it comes to Scotland. So far, his message to Scottish voters has been that they can’t have a second referendum and that’s it. Sturgeon’s reply that this position is undemocratic, feels irresistible. The longer Johnson refuses to consider a referendum, the longer the pressure will build and the more the anger north of the border will intensify.