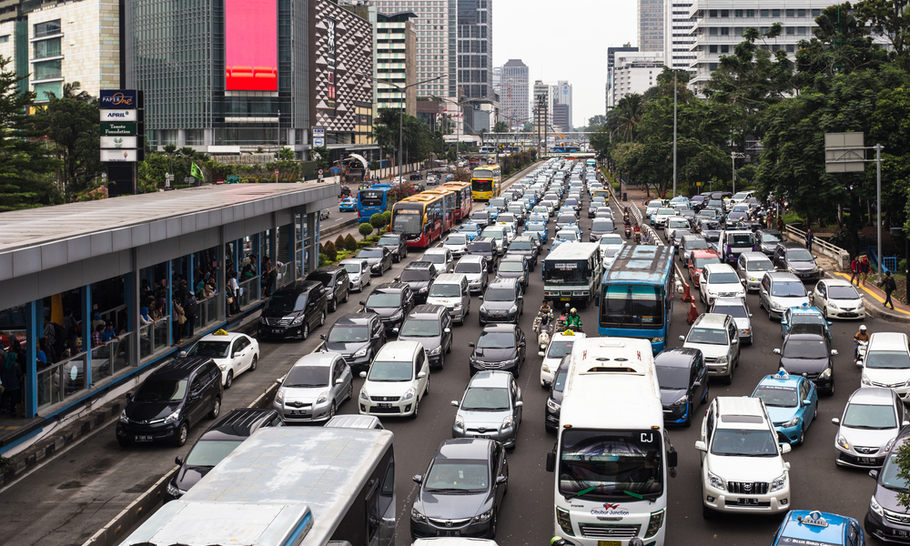 Peak-hour driving across the Indonesian capital, Jakarta, is infuriating. What was once a 15-minute cross-town hop on a good day can now take hours, with traffic grinding to a halt along major thoroughfares and clogging up suburban networks.

It’s a daily reality that has many business people setting up office in their car.

“I’ve got time for two meetings a day — morning and afternoon. In between, I’m stuck in traffic so it’s easier to hire a driver and work from the car,” said a Canadian businessman, who has spent the last seven years in the world’s most congested city.

Jakarta — a city of 10 million people — is sinking, it has overstretched infrastructure and vast slums dwellings. This is why President Joko “Jokowi” Widodo wants to shift the Indonesian capital to East Kalimantan, a wilderness province on the island of Borneo.

His idea was given impetus by the January floods, which left at least 66 people dead. The widespread chaos, landslides and disease forced officials to spray the capital with disinfectant.

More than thirty million people live in the greater region known as Jabodetabek, on what was once a swamp. Add climate change and rising sea levels into the mix and Jakarta’s shelf-life is limited.

Experts such as Heri Andreas from the Bandung Institute of Technology are predicting that 95 per cent of the city’s north will be under water by 2050. The problem is aggravated by a shrinkage of underground water supplies.

When city authorities recently inspected 80 skyscrapers, they found 56 had groundwater pumps and 33 were extracting water illegally.

There is now a sense of urgency over the $34 billion plan to shift the capital, a move initially touted by Indonesia’s founding father Sukarno.

But problems are already emerging. Environmentalists have questioned claims that the new capital would be built as a “zero emission” city on vacant land within a rainforest.

A coalition of NGOs recently released a report claiming the area is already controlled by 162 mining concessions, mostly coal companies, and that they stood to profit from selling coal-fired electricity, a point overlooked when the original plan was announced in August. Indonesia has a dubious record on managing its natural environment.

“If the government says it’s going to be the public who will benefit, that’s a big lie,” said Merah Johansya, spokesman for the Mining Advocacy Network. “The ones that will benefit are these companies.”

Even so, the new site has its advantages over the old capital. East Kalimantan sits in the middle of the archipelago of more than 17,000 islands surrounded by the Pacific Rim of Fire. It is less prone to the volcanoes, earthquakes, tsunamis and floods that can take a heavy toll on life in Indonesia. It is central, and already boasts access to seaports and two airports.

A pet gripe among Indonesians — who range from Christians in Timor and Papua, to Hindus in Bali — is that the all-powerful Muslim clans of Java have enjoyed too much control for too long through their historical hold on Jakarta.

One favoured name for the new capital is “Mandalanusa” which loosely translates as “centre of the archipelago”. Jokowi’s critics, with tongue in cheek, have put forward “Saint Jokoberg” or “Jokograd”.

The President optimistically insists Indonesia’s purpose-built capital — like Canberra, Brasilia, Ottawa and Washington DC — will be ready for the first bureaucrats by 2024, that is, in time for the next election.

But, realistically, it could take a decade before this is completed. The government is providing only 20 per cent of the budget and private investors are expected to fund the balance, including the construction of 1.5 million homes.

The plan to shift the capital is for now, though, little consolation for the Canadian businessman sending emails from the back seat of his car while stuck in a peak-hour grid-lock.

“There’s no doubt that this has to happen,” he said. “Look at the traffic, it gets worse and worse, month after month, and the shift will happen on Indonesian time, thus I doubt we’ll be moving there within the next few years.”