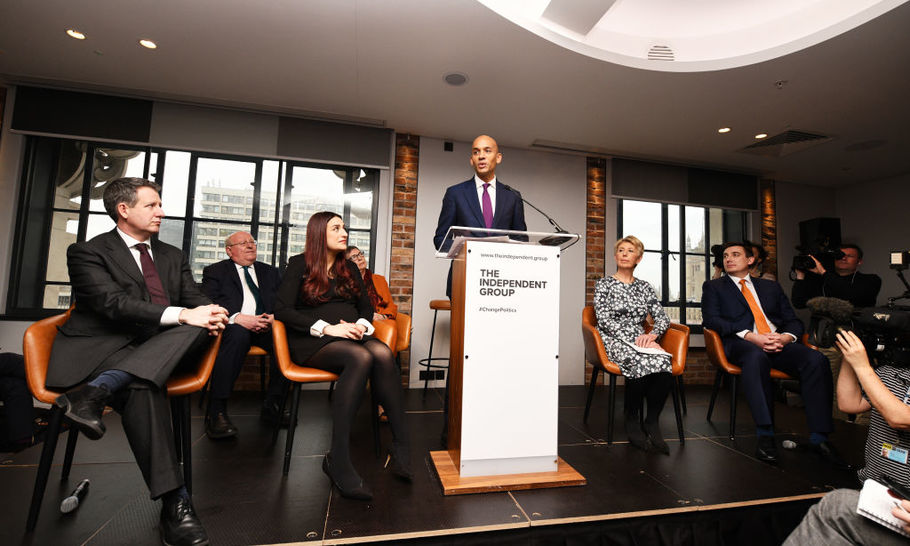 The Independent Group arrived with something of a bang back in February. The image of Luciana Berger, Chuka Umunna et al explaining why they had left Labour will linger long in the memory. The momentum built when they got Tories Heidi Allen, Sarah Wollaston and Anna Soubry to join them. Since then, to put it mildly, things have fallen a bit flat.

While the Lib Dems are loudly and proudly putting ‘Bollocks to Brexit’ on the front of their manifesto, the other Remain party appears to be having something of an existential crisis. Keeping up with what they are called is hard enough, never mind knowing what they stand for.

One week it’s the Independent Group, the next its Change UK. My understanding is that the word ‘independent’ was something of a sticking point for the Electoral Commission. If that was the case, the MPs and those around them really should have checked what was admissible before revealing themselves.

Their logo is instantly forgettable, a meaningless stock image; the Twitter account and web addresses, meanwhile, have changed alongside the party name. Consequently, it is hard to find Change UK on Google. Change.org, the petitioning website, is already prominent on multiple online platforms.

TIG even managed to lose its original Twitter handle during a rebrand this week. @TheIndGroup is now owned by someone calling themselves Cringe UK – The Anti-Independence Group whose biography declares they are a “parody of a parody of a political party” and that “Brexit means Brexit.”

You might regard all this as ephemera, but actually, it matters. The naming issues and social media faux-pas have become symptomatic of a wider problem. They show a lack of organisation, a lack of strategic thinking, and a total failure to grasp how modern communication tools work. The biggest challenge any new political party faces is being taken seriously. These issues make it all too easy for the public to dismiss TIG as an irrelevance. It also surely puts off other MPs who might have considered joining them. Who wants to join a shambles?

We live in noisy times, and while nuance is important, you also need to be clear in order to cut through. Amateurish branding is stopping Change UK – The Independent Group doing that. Instead, it all feels like every bit of public message is a compromise, done not to upset any of the MPs and knock the delicate balance they have found. All the while, their rivals are cashing in.

On the Remain side, the Lib Dems are showing that sometimes old-fashioned machine politics works. Aside from the catchily-titled EU election manifesto,  look at how they clicked into gear to get a historic result in last week’s local elections. Yes, local campaigning at a time of national political frustration is catnip to Lib Dems, but the party was unequivocal about what it stands for and what it wants to achieve. Whoever thought Vince Cable would turn out to be the decisive one?

Compare the TIG approach to that of the Brexit party as well, the other new kids on the block. Brexit by name, Brexit by nature, with an arrow pointing towards forward as their logo. When you get your EU ballot paper, you will see the word Brexit on it, nice and clearly. It doesn’t leave much room for interpretation, does it?

The truth is that when held up against these two other parties, TIG looks amateurish. At first, this somewhat improvised approach was rather refreshing. The slight awkwardness about knowing where to sit in the Commons, the pictures of the Nando’s meal…it all made it feel like, for a brief time, there was some light emerging from the political gloom.  Along with that, TIG had some character in the form of Soubry, clout courtesy of Wollaston, charisma from Umunna, and a powerful combination of charm and steel via both Berger and Heidi Allen. It helped them ride over the presentational pitfalls.

But now the honeymoon period is well and truly over. Despite how often we are told that “the country voted to leave the EU,” by certain public figures,  a large chunk of the population is very angry that Brexit is still being pursued. More than that, they are worried about the consequences if it actually happens. With the Tories in chaos and Labour working to implement Brexit, these people wanted to see that TIG would stand up for them and really offer something different.  So far it has failed to do so, and that is typified perfectly by its unprofessional approach to branding and communications.

You do not have very long to make an impact in politics. If TIG wants to be anything more than a short-lived vanity project, it needs to sharpen up, and fast.