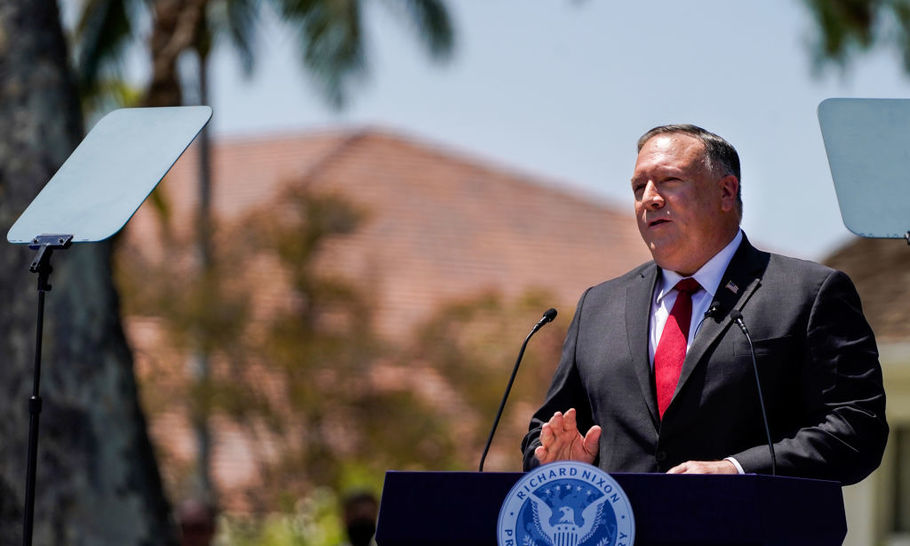 In a speech last week on Communist China and the Free World’s Future, US Secretary of State, Michael Pompeo, asked rhetorically whether nearly 50 years after Richard Nixon’s landmark visit to China in 1972, America was any safer, and if the likelihood of peace in the future was any greater. Like it or not, the speech — the final one in a series by other high-ranking officials on ideology, espionage, economics and international relations — was important. Even if it has been obvious for a while, it marked a confirmation that we are now at the end of engagement with China, at least as we have known it for the last decades.

American, British and other policymakers, commentators and citizens are racking their brains trying to figure out what is to become of the relationship with China, which is going downhill quickly with no off-ramp (at least until after the US presidential elections in November). The good news is that for the first time some politicians are saying that GDP alone and the economics of full-on economic engagement with (a now economically much more challenged) China now have to weighed more carefully against its behaviour, and the more aggressive projection of its values and governance standards. This will almost certainly have come as a surprise in Beijing. But what is to be done?

It is worth looking at the orchestrated speeches by US officials. Secretary Pompeo’s speech can be found here but earlier speeches on the economy, ideology and espionage by Attorney General William Barr, National Security Adviser Robert O’Brien, and FBI Director Christopher Wray, respectively, can be found here , here and here.

Together these statements amount to a formal refutation of what Pompeo called the “old paradigm of blind engagement with China” in which he argued the US had allowed the Communist Party, among other things, to exploit the opening up of research and education in the US. Chinese assertiveness has also created an environment of self-censorship in Hollywood and of corporate fealty in business.

America ’s disenchantment with the status and content of the China relationship is widely known and understood. Although you can read political rhetoric and politically bellicose statements in the speeches, there is no question that it is not just the US, but many other nations too, that have come round to the same view about the old paradigm of blind engagement.

Japan and several other countries in Asia have long been sceptical about China, at least from a political and security, if not economic, standpoint. Australia, Canada and New Zealand have all turned that way. The 180 degree shift in the British government’s own position has been widely commented on recently, for example here . Importantly, the EU, which has attracted a lot of US criticism for being a weak link in the Sino-Western relationship and being quick to succumb if EU business was at stake, seems to be undergoing a remarkable transformation.

Modest signs of a change have been evident in the last three to four years during which the EU completed investment screening legislation. It also started paying attention to China’s Belt and Road Initiative, which has edged into its own back yard in central and eastern Europe — even in Italy. Yet, the Commission’s decision in early 2019 to designate China a systemic rival now seems a tipping point in EU-China relations, which have soured markedly this year in the wake of the pandemic and allegations of a “bullying” style of diplomacy, as well as interference and the spread of disinformation in key European countries.

For the EU, pragmatic or constructive engagement — the pursuit of trade and commerce agreements, a tendency towards multilateralism while soft-pedalling on contentious political issues — seems no longer acceptable. Leaders are looking for a more forceful, workable alternative. This is not yet clearly defined, but senior politicians are reconsidering China relations in a number of ways, for example: a more robust trade policy; tighter rules on direct investment relations; stronger security provisions when it comes to 5G; a curb on state subsidies for firms wishing to access the Single Market; and access barriers to European innovation and procurement.

Notwithstanding the initiatives emanating from Brussels, the EU faces an internal tension that sovereign states don’t, namely dissent among the 26 member states, some of which prioritise economic interests, or at least are torn between geopolitics and economics. This will be Germany’s problem to manage, now that it holds the EU Council presidency until the end of this year.

In any event, the next scheduled major event in the second half of the year will be the US elections in early November. Whoever wins, the structure of the new China relationship seems unlikely to change much. Pompeo said in future it would have to be based on fairness, accountability and reciprocity, including both carrots and sticks. There would be an emphasis on national security and human rights, and respect for international obligations, such as freedom of navigation in the South China Sea. Most political experts think these would figure equally in a Biden administration. The goal, simply put, is to ensure that a hitherto unchallenged China, understands that its actions will now incur costs and have consequences.

Yet there is no guarantee this will work to change China’s behaviour or encourage opposition to Xi in the party. If Pompe o, and indeed his boss, think the US and the West need a new China strategy that’s going to work, they or a future administration have to recognise it’ll need international orchestration. When he said  “maybe it is time for a new grouping of like-minded nations, a new alliance of democracies”, it’s like he isn’t aware that there are already well-established forums of like-minded nations and alliances of democracies. Further, they have been arguing the time has come ever since President Trump began in 2017 to abandon or sideline international organisations and commitments, and alienate and sanction allies.

It is important that a coalition of democracies, bound together by concerns about China’s strategic designs and values comes together, but a coalition of countries with noses put out of joint is not enough. What is needed is a coordinated and carefully calibrated strategy, based around a re-engaged US leadership and an agreed agenda that simultaneously counters China where necessary, collaborates with it where interests are aligned, and cultivates economic and technological capabilities as alternatives to those China is pursuing. This is the challenge for this decade.

China Mike Pompeo Pompeo The US