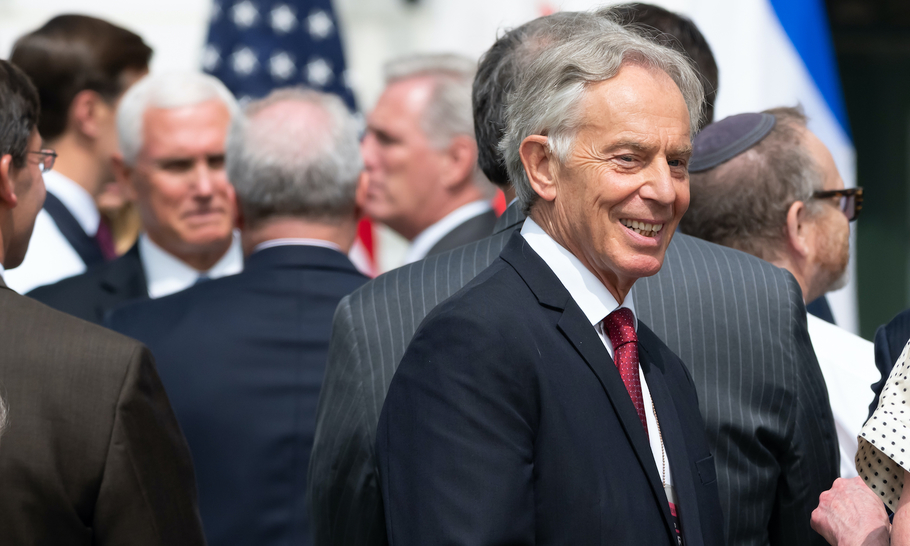 Tony Blair at the signing of the Abraham Accords 2020 (Shutterstock)

Many political figures (including Government scientists) have become household names in the past year, from Matt Hancock to Jonathan Van-Tam. But it is perhaps the most familiar face of all who has received the best press: Tony Blair.

Whether it be introducing “Covid passports”, delaying the second jab or introducing mass testing (including its codename “Moonshot”), the former Prime Minister and his think tank, the Institute for Global Change, seem to have been behind many of the most important government policies of the past year.

Indeed, there has even been speculation as to whether Blair is plotting a return to frontline politics. Reports emerged earlier this year that he is considering a “De Gaulle style comeback”, a reference to the French President who was re-elected thirteen years after leaving office. As his former Conservative opposite number, William Hague, would say: Blair is “on manoeuvres”.

But could Tony Blair, now 67, really make a comeback?

He is undoubtedly Labour’s most successful leader in the party’s history. Though Harold Wilson won four elections compared to Blair’s three, only the latter has governed continuously for a decade, after winning Labour’s largest ever parliamentary majority. Under Blair, Labour enjoyed its longest unbroken period of rule and was dominant in parts of the United Kingdom it has since lost (Scotland, Wales and England). Back then, the Red Wall was impenetrable.

Of course, following the Iraq War and his vexed relationship with his Chancellor, Gordon Brown, Blair was forced to step down in 2007. “Bliar”, as some now called him, went from hero to zero. And with the onset of the financial crisis in 2008, New Labour’s management of the economy came back to bite it — though this was primarily Brown’s responsibility rather than Blair’s. One of David Cameron’s strongest campaign assets in 2010 was the jocular note left by the Chief Secretary to the Treasury, Liam Byrne: “I’m afraid there is no money.”

Since leaving office Blair has become an even more controversial figure, fervently opposing Brexit and earning tens of millions of pounds from corporate and speaking engagements. Commentators often cite the Blair government’s decision to open the UK’s labour market to EU migrants as one of the principal causes of disillusionment with Europe.

He is also a toxic figure within his own party. Jeremy Corbyn’s Labour was a deliberate foil to the corporate-friendly New Labour years, when Peter Mandelson proclaimed that “we are intensely relaxed about people becoming filthy rich as long as they pay their taxes”. Even the current leader, Keir Starmer, a more centrist figure, has distanced himself, invoking Clement Attlee and Harold Wilson rather than Tony Blair.

Blair himself has visibly aged over the decades and might not hold the same appeal he did in the nineties and noughties, when he was the youngest prime minister since 1812 and embodied the millennium spirit of “cool Britannia”. As early as 2005, the opposition leader, David Cameron, damagingly quipped that “he was the future once”.

If Blair did want to return, there are precedents. Some of Britain’s most famous prime ministers have gone on to be re-elected following long periods out of office, including William Gladstone and Winston Churchill. Moreover, given the popularity of septuagenarian leaders in recent times, Blair wouldn’t exactly be out of place. After all, he is four years younger than Jeremy Corbyn — and only two years older than Churchill was when he first entered Number Ten.

With age also comes experience: Blair has often remarked that he was only just hitting his stride in his final years in government.  In an age of populism and mistrust of “experts”, Blair the elder statesman might hold much appeal. If Blair the younger embodied the Greek ideal of kouros — a youthful boyish figure — Blair the elder embodies the Roman figure of the patrician, prized for his age, wisdom and experience. Indeed, the present Government (like those of Cameron) seems to think as much.

As for Labour, while it might have misgivings about Blair, the party is not exactly spoilt for choice – it has not won an election since he stepped down 15 years ago. Just last week, public support for the Leader of the Opposition, Keir Starmer, reached its lowest point to date and the Tories opened a gaping 13-point lead.

With Brexit done and its greatest advocate, Nigel Farage, having now promised to step down from politics for good, Europe is no longer a barrier to Blair’s return. A Conservative Chancellor has just borrowed more in one year than Gordon Brown did in ten. What were once insuperable obstacles to a Blair comeback might now be out of the way.