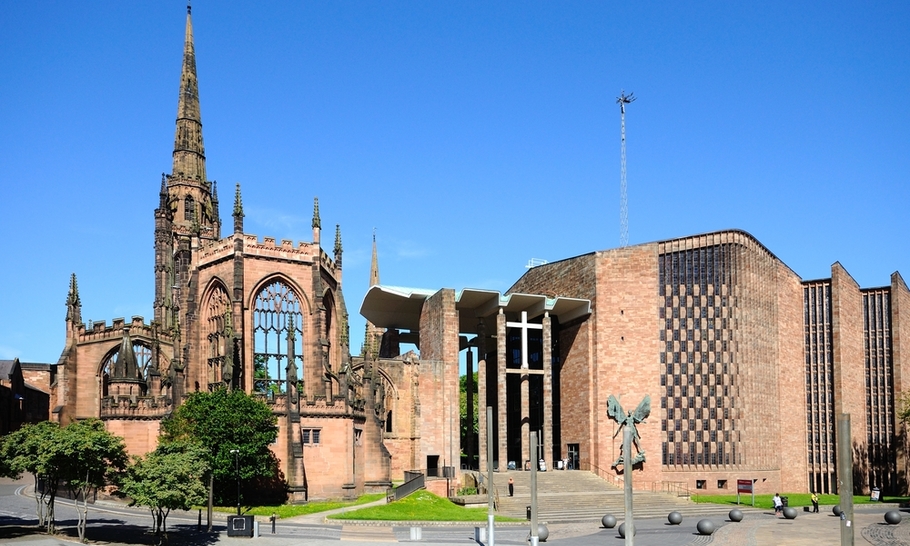 Coventry is the UK City of Culture in 2021. There will be no finer tribute to the city this year than John Wyver’s superb documentary, Coventry Cathedral: Building for a New Britain (shown on BBC4 last week and still available on BBCiPlayer).

For more than thirty years Wyver has been one of the best writers on television and one of the most interesting arts TV producers. His journey — from Channel 4’s golden age in the 1980s to producing documentaries on Kenneth Clark and Peter Brook for BBC2 in the 1990s and now BBC4, collaboration with the RSC and researchers based at the University of Warwick’s Centre for Television Histories to make this film — is almost a perfect metaphor for what’s happened to arts TV in this country. If I could make a wish for the future of BBC4 it would be to put John Wyver in charge of it and make it a truly creative channel for using archive and TV history.

Wyver’s documentary on the rebuilding of Coventry Cathedral, beautifully shot by Todd MacDonald, and produced together with Wyver’s long-time collaborator, Linda Zuck, told the fascinating story of how the only Anglican cathedral to have been destroyed in the Blitz rose again from the ashes.

A number of things stand out from the film. First, the idea of architect Basil Spence to leave the ruins of the old cathedral beside the new cathedral, like the great Kaiser-Wilhelm-Gedächtniskirche in central Berlin, also largely destroyed by enemy bombs. It wasn’t just the juxtaposition of old and new. Spence was making a much bolder assertion: that we need to acknowledge the destruction caused by the war, at the same time as rebuilding for the future.

Sixty-five years ago, the Queen laid the foundation stone on 23 March 1956 and the building was consecrated on 25 May 1962, in her presence. The ruins remain hallowed ground and together the two create one living cathedral.

This vision was about faith. But the vision which fascinates Wyver more was clear from the programme’s subtitle: “Building for a New Britain”. Much of the newsreel was infused with a kind of utopian faith in the future, not one about religious faith, but about Modernism. “People love the old buildings,” said Spence, but he wanted something new, which reflected the spirit of the Festival of Britain (for which he had designed the Sea and Ships Pavilions in 1951) and the optimism of post-war Britain. This was more than just about architecture. It was also about a new vision of urban planning.

It was not entirely clear how such major figures as Jacob Epstein, Graham Sutherland and John Piper became involved in the project or how Benjamin Britten came to compose his War Requiem for the consecration of the cathedral in 1962. What matters, though, is that today it is simply inconceivable that such major cultural figures would lend their genius to an equivalent project. Or, rather, it is inconceivable that such a project would take place in Coventry or in contemporary Britain at all. These are huge issues about the state of architecture and thinking about cities in present-day Britain. There is talk of a monument to the victims of coronavirus and of a hideous Holocaust Memorial near the Houses of Parliament. Neither remotely match the creative genius of the stained glass windows, Sutherland’s tapestry or Epstein’s sculpture, St Michael Overcoming the Devil.

It’s also worth noting that some of the best parts of the documentary were taken from a programme presented by Kenneth Clark for ATV in 1962. Who, today, would be the equivalent of Kenneth Clark sixty years ago? The answer is there is no one on British television with Clark’s authority or erudition, just as there is no one in British art comparable to Epstein or Sutherland.

These are not points on which Wyver wished to dwell. He was too infused with the optimism of the newsreels and interviews from the 1950s. They spoke of a new vision of Britain. Clark was not exaggerating when he thanked Basil Spence for “the greatest and most imaginative act of patronage for at least a century”.

Spence’s cathedral was part of a new vision of culture in Coventry. In 1958 there was a new theatre, the Belgrade (early company members included Trevor Nunn, Ian McKellen, Joan Plowright, Frank Finlay and Leonard Rossiter). Then there was the Herbert Art Gallery (1960) and the new cathedral (1962), named after a local industrialist who had donated £100,000 to the city of Coventry to pay for the construction of an art gallery and museum.

“The town of the future” is how Coventry was described in Our Land in the Making, a popular Ladybird book from 1966. Not now it isn’t. Wyver was less interested in the contrast between Coventry then and what became of Coventry over the past fifty years. The cathedral is beautiful, but the honeymoon was short-lived and the utopian vision of the newsreel commentaries rings terribly hollow. That pedestrianised shopping centre looks uncannily like scenes from Stephen Poliakoff’s dystopian TV drama, Bloody Kids, filmed in 1979, less than twenty years after the new cathedral was consecrated. Two years later, in 1981, The Specials, a band from Coventry, released their hit single, Ghost Town, which brilliantly caught the mood of early Thatcher years.

There are plans to tear down the shopping centre. It can’t compete with out-of-town retail parks or Amazon. And later this year, forty years after Ghost Town, The Specials will be going on a UK Tour, including Coventry on 11 September.

My only regret about Wyver’s superb documentary is that he didn’t play Ghost Town over what the shopping centre looks like now:

All the clubs have been closed down

Too much fighting on the dance floor.”

There are many reasons why Labour in the past ten years has ceased to speak for Middle Britain. Coventry, despite the beauty and boldness of Basil Spence’s cathedral, is one of them.