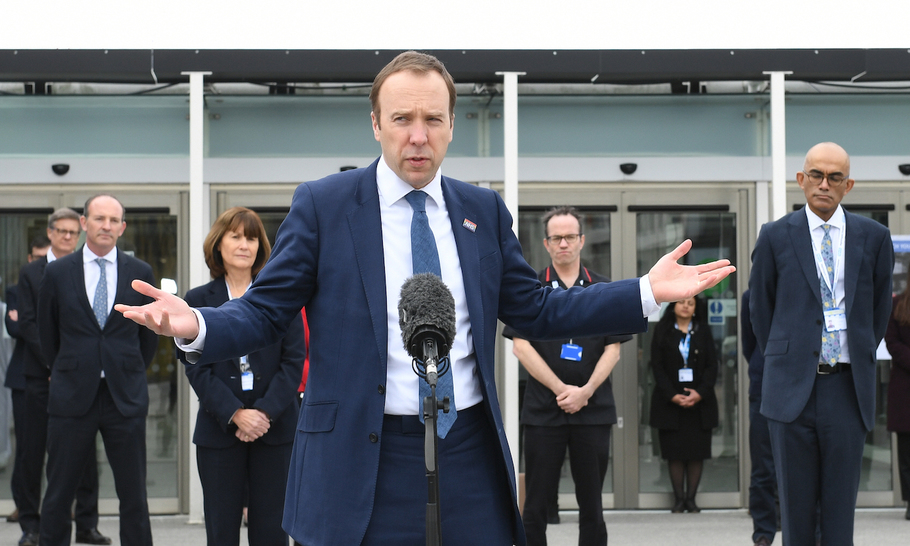 Compared with ministers who had been fronting government handling of the Covid-19 crisis, Matt Hancock, judged purely on presentation, did well yesterday. At last there was some detail on why the UK has fallen so far behind Germany and others in testing for the virus. There was empathy for the dead, and support for those working on the frontline.

His advisers would also be pleased that he shot straight to the top of the news with a bold commitment to deliver 100,000 tests daily by the end of the month. Having failed woefully to deliver on previous targets, I tend to agree with the BBC’s Matthew Amroliwala that the media should be focusing on what is happening now, today, not constantly falling for a new line, a new claim, a new target, a new piece of speculation thrown out by the government. However, again set against the performance of other ministers at that lectern in Number 10 — with Business Secretary Alok Sharma the worst — Hancock did OK. His spin doctors will have said to him, with some justification, “good job well done,” as he walked out of the briefing room.

But any positivity I felt about the improved performance at the Downing Street lectern was wiped away by the naked populism inherent in his call.

Do I think Premier League footballers earn too much? In many cases, yes. Do I think that right now, we need doctors, nurses, cleaners and care workers, more than we need Harry Kane or Trent Alexander-Arnold, Pep Guardiola or Sean Dyche, manager of my team, Burnley? Yes, I do. But they think that too.

The question is whether, as a matter of policy, they should all take a pay cut, and whether that is an issue for government.

It is not Harry Kane’s fault that Spurs chairman Daniel Levy has chosen to ask for government help for non-playing personnel as part of the furlough scheme. It is not Steve Bruce’s fault that Mike Ashley has done the same. Added to which, many football clubs, in common with other businesses — which they are, albeit businesses with a very special place in their communities — are facing an existential threat.

I know a lot of managers, and a lot of footballers. Some are obsessed with money and uninterested in the world outside. Some are not the brightest. But many I know already do a lot of good with their fame and their fortune. Putting them all in the same boat is on a par with saying all politicians are liars, or only it in for themselves. Neither statement is true.

I’m sure that football collectively, and many players and managers individually, will do something positive, and would have done regardless of anything Mr Hancock said. So when the Premier League makes an announcement, I hope nobody runs with the line that this was all down to the Health Secretary.

Some, such as Guardiola, who has made a million pound donation to help his Catalan homeland, have already done so. Many clubs, Burnley among them, have put their facilities at the disposal of the NHS of which Hancock is the political head. Some players and managers do all they can to avoid paying tax. Most don’t, and the top ones pay a lot. If government thinks they should pay more, then tax them more, but of course higher taxes for the wealthy, not least at elections, goes against what they “believe in”.

Throughout this crisis, the government has not given much of an impression of knowing what it is doing. Yesterday Hancock knew exactly what he was doing — he was creating a distraction from the government’s failures on which he was being questioned. He was picking on an easy target. He was guaranteeing that people calling up the talk shows on the sports stations with no sport to cover would say “yeah, that Matt Hancock’s got a point, I mean why should Raheem Sterling still get hundreds of thousands every month when the nurses are risking their lives for peanuts?”

It is a question you could have asked any day since the Premier League and Sky Sports combined to create the market — that thing that the Tories so love — to develop one of the country’s most famous and most successful exports. Yet in different times, when things were good, politicians like Hancock, previously in charge of sports policy as Culture Secretary, were keen to get the backing of football stars and managers, keen to be seen at games, keen to be associated with such a glamorous and successful world, keen to experience fan passion that alas politics can rarely arouse.

So it is all about the context. But politics should be about principle, not merely context. What is the principle that says, when we are in a crisis, footballers should suddenly earn less because nurses and doctors are at the heart of the crisis?

And if such a principle exists, should we not also have stories such as these across the newspapers?

–       Hancock “tells” Boris Johnson to give £15,000 to the NHS to atone for the freebie holiday he took in Mustique as the coronavirus crisis was emerging . . .

When he is finished with his Tory colleagues, perhaps he could “tell” JK Rowling to give a share of her royalties to NHS charities (though I expect she already has, and not shouted about it,) then maybe “tell” Lewis Hamilton, Chris Froome and Tyson Fury to do the same, and then “tell” Daniel Craig to donate part of his final James Bond performance fee to the NHS, and “tell” Adele to send some of her earnings in the same direction.

Then he could ask those lawyers, architects and advertisers lucky enough to be multi-millionaires to do the same. Then — don’t bank on it — perhaps he could say to the bankers and hedge funders who bankrolled the Tories’ election victory to dip into their vast personal wealth. And finally, might he not call on his fellow Cabinet ministers to share some of their own £135,000 salaries?

Or might he not be better advised showing that he is worth that salary, by doing the job for which he is reasonably paid? That is, run the NHS, which means, at this time, sorting out this crisis.

So, Mr Hancock, the next time someone asks if you think Premier League footballers should take a pay cut, say this: “Right now, I have bigger and better things to do than worry about what footballers, film stars, TV presenters, ballet dancers, or anyone else do with their money. I just hope they are all staying home, because that way we will get through this quicker, and get back to normality including competitive live sport, which so many people are missing right now.”

Free advice over. Now do your job, get a grip, and leave the populism to the shock jocks and the twitter trolls. We need grown-up politics and governance right now, not cheap shots.