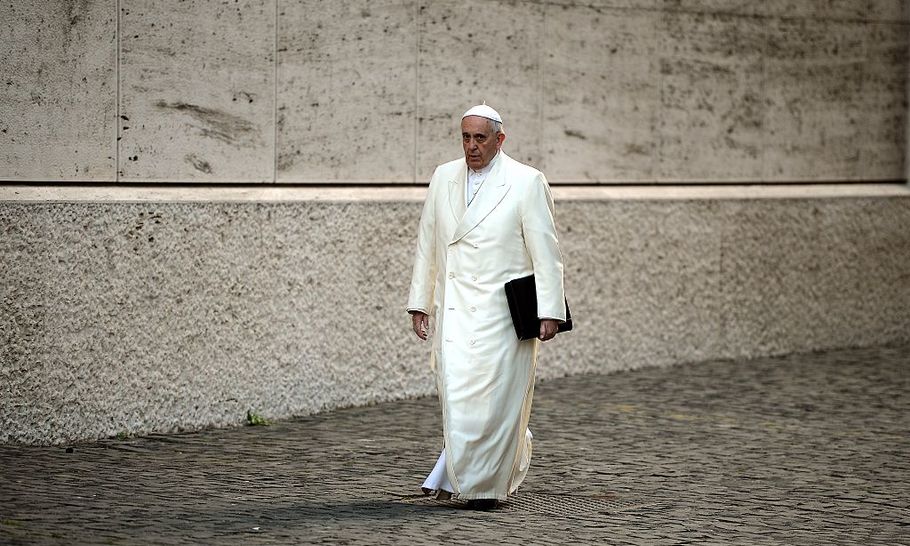 Right-wing and left-wing, traditionalist and progressive, are terms often used to describe the nature of the fault lines in contemporary Catholicism. Millions of Catholics, of course, don’t fit these categories. The Pope-centred Catholicism of right-wing traditionalists, loyal to a fault, is fast disappearing. Open opposition to Francis has broken out.

Catholics believe that the Petrine Office, as the name suggests, was first given to the apostle Simon Peter whom the Gospel writers present as a man who made mistakes. By getting it wrong, the reader is shown how to get it right. But on the vital faith-defining and definitive question, “Who do you say that I am? “ Peter expresses his faith: “You are the Messiah. The Son of the Living God” and receives the response “Thou art Peter and upon this Rock I will build My Church”

Catholics are traditionally loyal to their popes. On 19 April 2005, the day Cardinal Ratzinger was elected Pope Benedict XVI, I was homeward bound waiting on Lille-Europe Eurostar platform. A call came from BBC Radio Ulster. Would I comment live in about forty minutes? Should I say what I thought? That the choice of Cardinal Ratzinger perpetuated Eurocentrism within a global church, or loyally point to him being a pious, principled and sophisticated theologian? The drum-beat of an Ulster Protestant pipe band beat in my head. Or was it just a stress headache? Eurostar saved the day. The train went into the Tunnel.

From the first moments of his papacy in 2013, Pope Francis, Argentinian of Italian origins, personified a global Church. He brought to Rome a manner and direction derived from Latin America. Its piety, theology and “option for the poor” permeated the Ignatian spirituality of his Jesuit training. It showed in his unostentatious life in Rome, in his inclusive, sympathetic treatment of gay people, and in his open-minded approach to other contested issues in the Church. He was fiercely critical of the clericalism and closed culture he encountered in the Vatican. Within four months of his election, Francis was addressing Brazilian bishops in Rio, highlighting the needs of indigenous people, and praising the pastoral work of the Brazilian Church. Two years later in 2015 came his encyclical Laudato Si on care for the planet which established his global standing as a leader of opinion. There was much traditionalist grumbling but no outburst.

Public criticism emerged a year later. Fear of his weakening the ban on divorced and remarried Catholics receiving the Eucharist, an internal matter, surfaced four traditionalist Cardinals who sent Francis a letter with five questions, seeking answers. The Pope had deliberately, and unusually, raised an issue without settling it. On 8 April 2016, Francis published Amoris Laetitiae, (The Joy of Love), an “apostolic exhortation” developing his thinking in the light of the recent Synod on the Family, encouraging “pastoral mercy”, in other words compassion — or laxity — depending where you stood. This time, 19 Cardinals wrote to challenge his approach. And the letter was leaked.

Conflict, which had never gone away, intensified in 2018. A former Vatican ambassador to the US, Archbishop Carlos Viganò, published a 7,000 word document accusing the Pope of blatant lies and calling for his resignation, a call without precedent. Viganò claimed that Francis knew that Cardinal Theodore McCarrick of Washington, a prominent US Church leader with access to Presidents, was suspected of sexual abuse of seminarians, and Francis had been culpably slow in forcing him to resign. Viganò went on to blame a homosexual conspiracy which he alleged had taken over the Vatican. An accomplished conspirator himself, he had, whilst the Pope was visiting the US in September 2015, snared Francis into a meeting with Kim Davis, a Kentucky county clerk who had served five days in jail for refusing a court order to issue a marriage licence to a gay couple. The cultural conflicts of the US were a communications minefield for the Pope. The meeting, of course, hit the headlines. And Francis sacked Viganò

In the US, right wing electoral politics chime with right wing Church politics. Not long after George Floyd’s killing in Minneapolis on 25 May, Viganò sent a public letter to President Trump who tweeted “he was honoured”. In it, the Archbishop set Black Lives Matter and the Covid Lockdown in an apocalyptic campaign by “the children of darkness” against “the children of light”. Dating from the 4thcentury, this Manichean imagery of spiritual warfare — unconnected to skin colour — illustrated the mental world Viganò inhabits.

Opposition to Francis in the US moved on from a call for resignation to political organisation. The US Better Church Governance Group began “political opposition research” scrutinising Cardinals’ records for what they termed a “Red Hat Report”. This year, two books both called The Next Pope were published in the US. One, by the veteran lay conservative, George Weigel, is sub-titled “the office of Peter and the Church in Mission”. Cardinal Timothy Dolan, Archbishop of New York, sent this book to all the world’s 222 Cardinals (124 are eligible to elect the next Pope) thanking the publisher. The rejection of Francis’s entire approach is not too disguised. The other book, by Edward Pentin, is subtitled “the leading Cardinal Candidates”. Pentin is Vatican correspondent for the US National Catholic Register, which is linked to the Republican religious mouthpiece, Eternal Word Television Network, ETWN. And the leading candidates are 19 Cardinals opposed to Francis. Do none recognise the inappropriateness of this démarche?

The right wing of the Catholic Church has learnt lessons on impropriety from US secular politicians. Viganò writes of the “deep Church… that betrays its duties and forswears its proper commitments before God”, the invisible enemy within, modelled on the “deep State”. You would be forgiven for thinking that the Republican/Catholic Right coalition can’t wait for the Pope to die and that their aim is to control the election of the next Pope. The traditionalist view used to be that this was the role of the Holy Spirit in the papal conclave.

The Catholic Left is often charged with “meddling in politics”. But they remained loyal over the years despite censure. The American Catholic Right has binned traditional loyalty. It is now introducing the methodology of politics as well as the ideology of the Right into Church.

Francis will be 84 on 17 December. Ad multos annos.