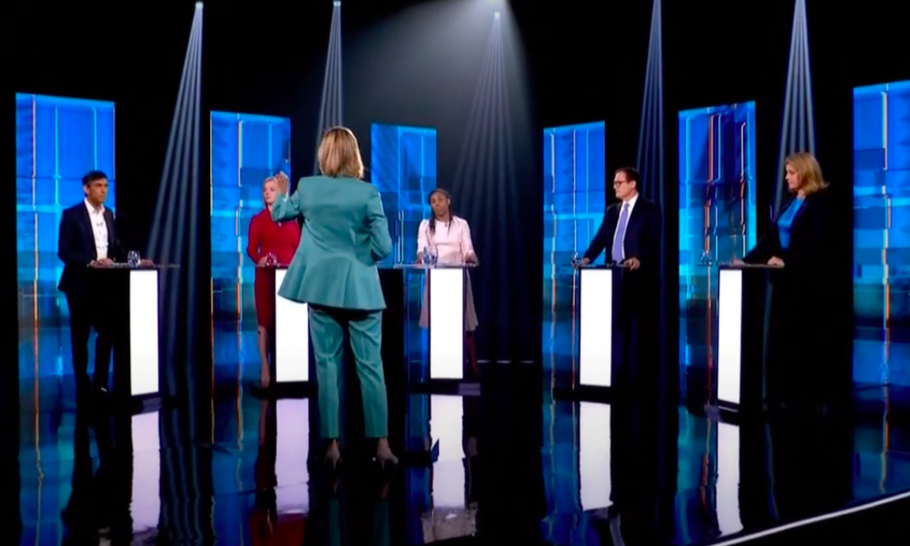 Whether or not it was a good idea to plunge the country into the midsummer madness of a Tory leadership contest, now that the race is in full swing we can surely all agree that it should be as transparent and inclusive as possible. It may suit MPs to keep the real action as far as possible behind closed doors, but that is not in the interest of the party members (who have the final say), let alone of ordinary voters. Given that this contest involves not merely the election of a party leader but also that of a new Prime Minister, there is an overwhelming case for holding the whole process in the most public manner possible.

Hence it is deeply disappointing that Rishi Sunak and Liz Truss, who are the two most senior politicians involved and also two of the three front-runners, are reported to be pulling out of the third TV debate, which had been scheduled for Tuesday evening. Now Sky News has announced that it has cancelled the debate. From a democratic point of view, this is unfortunate, to say the least. It was already odd that the BBC, our national broadcaster, was not hosting any forum for the candidates — perhaps because of a lack of trust on their part.

The Channel Four debate last Friday was to some extent hijacked by the presenter, Krishnan Guru-Murthy. In order to exact revenge on the outgoing PM and his party, not least for the crime of privatising his employer, Guru-Murthy put the candidates on the spot, demanding to know whether they thought Boris Johnson was honest. He used the studio audience, too, to imply that none of the candidates was in tune with public opinion — although there was nothing representative about its membership.

This debate was a humiliating experience for some candidates and afterwards Rishi Sunak and Liz Truss reportedly agreed that their participation had been a mistake. Policy differences had been aired in public, rivalries were impossible to disguise, and those with most to lose were also the most exposed.

The ITV debate on Sunday evening (pictured above) was much fairer and more enlightening for the viewers. Julie Etchingham conducted the exchanges briskly but not overbearingly, and there was more opportunity for the participants to debate with one another. The result was that their strengths and weaknesses emerged much more clearly than before. However illustrious the ministerial careers of one or two of these politicians, none of them is yet really familiar to those outside the Westminster bubble. An unusually large audience of 2.7 million watched and drew their conclusions.

The cumulative effect of the past week of exposure has been dramatic. In the first two rounds, the candidacy of Penny Mordaunt gathered momentum, not least because she had been preparing her campaign for months. On Friday she seemed firmly established in second place among MPs, with a good prospect of beating Rishi Sunak, the favourite, in the members’ ballot.

Last night, however, the Mordaunt machine ground to a halt. Some of her former bosses and colleagues had cast doubt on her diligence and competence as a minister. The weekend press had not been kind to her, and her opponents had plenty of ammunition. Her answers were vague and did not stand up to scrutiny. Polls suggest that the penny has dropped with the party and the party is dropping Penny.

It was striking that much of the debate revolved around Rishi Sunak’s record. Liz Truss challenged him on his responsibility for signing off the Bank of England’s vast quantitative easing programme during the pandemic, which economists in the monetarist tradition blame for unleashing inflation. The former Chancellor had no satisfactory answer, but instead accused the Foreign Secretary of advocating “socialist” borrowing to pay for tax cuts. It may be that these sharp exchanges will have raised doubts among Conservatives about both candidates.

No such doubts, however, have been cast on Kemi Badenoch. Her star continues to rise with each appearance. Her critique of the Treasury’s profligate pandemic loan scheme, which may have squandered as much as £17 billion through fraud and bad debts, met with a weak response from Rishi Sunak. Kemi Badenoch was persistent and forensic, pointing out that the minister with the most detailed knowledge of the scheme, Lord Agnew of Oulton, had resigned in protest — and was now backing her campaign. The overall impression was that public money would be safer in Kemi’s hands than in Rishi’s, or indeed any of the others’.

Polls by Conservative Home show that Kemi Badenoch, though almost unknown to the voters a week ago, is now more popular with party activists than any of her rivals. This is why the attempt, led by Rishi Sunak, to close down the public part of the debate is so pernicious. The Tory establishment is closing ranks against the true insurgent, who is not Penny Mordaunt but Kemi Badenoch.

This reactionary reversion to the old ways of the “magic circle” will surely fail. MPs have a chance this week to give their membership the choice they want: Rishi Sunak versus Kemi Badenoch. For that to happen, supporters of eliminated candidates (Suella Braverman, who lost last week, and Tom Tugendhat, who is expected to exit today) would have to vote for Kemi. If that happens, many MPs will consider switching to her from Liz Truss, whose campaign has by common consent been lacklustre. The next two days will be crucial.

The Conservative Party has an historic choice to make: more of the same policies from the man whose stewardship of the economy has led us to this crisis, or a clean break from the past. Kemi Badenoch described herself as a “wild card”, but in truth a vote for her is not a gamble, but a farsighted investment in the future.