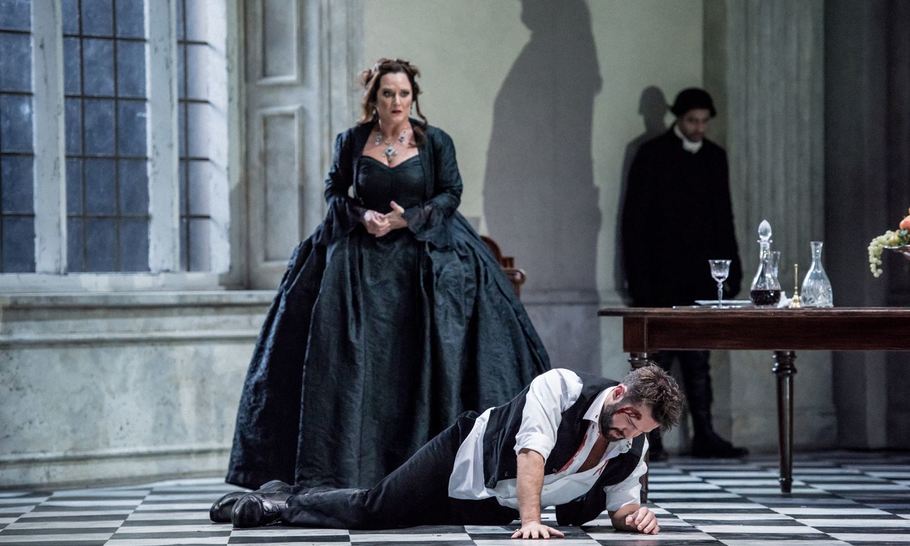 Sex, sadism, religion and art, served up on the basis of real historical events: Tosca has everything. Sardou’s play La Tosca, on which Puccini based his opera, involves a torture scene, execution, attempted rape, murder and two suicides, and at the end we count four corpses — the escaped prisoner Angelotti, Chief of Police Scarpia, the painter Cavaradossi and his lover, the opera singer Tosca. The key element is Tosca’s irrational jealousy, like that of Shakespeare’s Othello — to whom Sardou refers when the cunning and cruel Scarpia picks up the Marchesa Attavanti’s fan in Act I. From that point on this hugely theatrical opera seems almost to flow inevitably.

The play itself, like others by Sardou, is a very accomplished piece of work. A highly successful man of the theatre, with his carefully thought out plots he meant to entertain. What he did not provide was depth of feeling. It was action above character, and G. B. Shaw referred to it as “Sardoodledom”. His plays are now forgotten, except of course for Puccini’s operatic treatment of La Tosca.

When the excellent duo of Giuseppe Giacosa and Luigi Illica turned it into an libretto, they gave the composer room for his music to invest the characters with a life of their own. We feel an intense emotional pull as Angelotti seeks refuge in the church, well-justified satisfaction as Tosca gives the sadistic Scarpia the kiss of death, despair as we realise Cavaradossi’s fake execution was all too real, and unquestioned sympathy at the end as Tosca throws herself off the walls of the Castel Sant’Angelo in Rome.

The opera is straightforward to stage, requiring only three sets: the interior of a large church, a substantial apartment (Scarpia’s) in the vast Farnese Palace, and the upper parts of the Castel Sant’Angelo, all in Rome. This new production for the English National Opera — imported from the Finnish National Opera — gives us an additional set. In Act III we first see Cavaradossi in his prison cell, before a curtain rises to reveal the soldiers, all in white. This makes them seem unreal, and über-intellectual director Christof Loy is clearly trying to get inside Cavaradossi’s mind. This is particularly true when the off-stage shepherd boy in Act III appears as an alter ego of Tosca, dressed in evening gown and wig, as she had appeared earlier when arriving directly from the theatre. In the end she is clothed in her long red coat, as in Act II when she exacts mortal revenge against Scarpia for his torture of her lover, and attempted rape against herself. Finally the doomed diva runs between the soldiers to the wall of the castle and throws herself off, as she should.

Unlike many productions, Tosca in the earlier acts seemed to find Scarpia attractive and shows delight when he kisses her hand, returning his kiss later before killing him. This is all part of Loy’s intention, perhaps showing how sexual desire can be hidden behind a conventional exterior. Indeed this might explain the appearance of stylish 18th-century figures in the background in Acts I and II, looking as if they had inadvertently stepped out of Mozart’s Marriage of Figaro. It certainly fits with the deliberate intention to mix costumes from different periods, with the Sacristan (trans woman Lucia Lucas) looking seedy in what seemed to be a light raincoat.

Musically, it was wonderful. Conductor Leo Hussain drove Puccini’s score forward with verve and great care for the singers with their ringing endorsement of the composer’s intentions. The Irish soprano Sinéad Campbell-Wallace made a compelling and beautifully sung Tosca, with the English tenor Adam Smith a thrusting and handsome young artist in contrast to the usual overweight inhabitants of this role. Roland Wood stepped in heroically to sing Scarpia, replacing the American baritone Noel Bouley who performed the role on stage. Very fine singing too in the smaller roles of Angelotti (Msimelelo Mbali) and the Gaoler (Ronald Nairn). Altogether a gripping Tosca, spoiled only by the odd incongruity. When Tosca enters in Act I, for example, she claims to have heard someone in the church. Her irrational jealousy is piqued, but in this production there was a boy assistant visible in the church, so it was no surprise that she might have heard someone. Despite such directorial inconsistencies the overall effect was excellent. This was a performance and production of which the ENO can be justly proud.