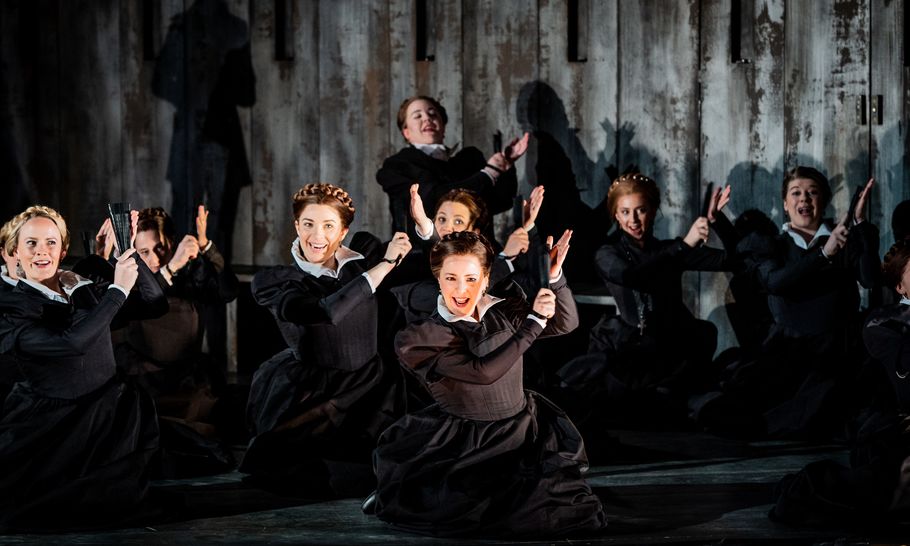 The summer opera season, which started this year with Berlioz’s Damnation of Faust at Glyndebourne in mid-May, is now well underway. Grange Park Opera in Surrey has revived its excellent production of Verdi’s Don Carlo from their old venue in Hampshire. Derived from Schiller’s play, this is the four-act version where Philip II of Spain is already married to his third wife Elisabeth. His first wife had produced an heir Don Carlos, title character of this opera, his second was Mary Tudor, and his third Elisabeth de Valois, originally betrothed to Carlos. Philip, keen on dynastic marriage, substituted himself as husband, and the tragedy Schiller invented involves a love between Carlos and Elisabeth that begins before the opera starts. Adding to the emotional mix, the beautiful Princess Eboli, living at the Spanish court, is in love with Carlos. As if this were not enough, Carlos wants to free the people of Flanders from his father’s rule, and is aided by Rodrigo, Marquis of Posa, a safe pair of hands and Philip’s favourite courtier. But powers temporal must reckon with the spiritual power of the Grand Inquisitor. It’s a heady mix, forming one of Verdi’s greatest operas.

Returning to his role in the original production, the excellent Clive Bayley made an assertive but troubled King Philip whose powerful and lonely soliloquy at the start of Act III elicited spontaneous applause, and Ruxandra Donose once again made a strong stage and vocal presence as a beautifully elegant Eboli. In her secret assignation with Carlos in early Act II the depth of darkness on stage understandably leads to his confusing her with the queen — a scene that misfires in many productions — and the resulting duet between her and rising international star Leonardo Capalbo as Carlos was gripping, as was the following trio with the superb baritone of Brett Polegato as Rodrigo. Eboli has suddenly turned from adoration of Carlos to pure fury, knowing his protestations of love were really directed at the queen, but her vengeance misfires and she put the cap on a brilliant performance with her Act III soliloquy where she curses her beauty. Mr. Polegato’s final aria in the same act likewise — it was sung with heart-breaking lyricism as he lies mortally wounded from an off-stage gunshot. These moments of drama were given full force by the singers, as was the Act I duet between Carlos and the strongly sung Elisabeth of Marina Costa-Jackson. The only weakness was a lack of bass depth by Branislav Jatíc as the Grand Inquisitor, but David Shipley made a strong impression as the monk at the start and the ghost of Charles V at the end, all wonderfully supported by the orchestra of the English National Opera under the vibrant baton of Gianluca Marciano, who conducted the same production three years ago.

The intense emotion of Verdi’s late Don Carlo is very different from that of Puccini’s early Manon Lescaut, which opened the season at Opera Holland Park. A girl on the way to a convent is torn between her love for the student Des Grieux, and the luxury represented by Geronte, a well-connected aristocrat who becomes her elderly paramour. It is set in the late 18th century, but young Polish director Karolina Sofulak decided to change this to the 1960s. She and her designer George Johnson-Leigh obtained their commission by winning the 10th European Opera Directing Prize, but it can be a tricky opera to pull off, and naively updating it in this way just didn’t work. In particular the choreography in the earlier part gave a distinctly amateurish slant to the staging — perhaps intentional since the late 1960s was a time of youthful experimentation, but it detracted from the drama. The singing however was on a stronger level with the beautiful honeyed tone and lovely phrasing of Elizabeth Llewellyn as the flighty and acquisitive Manon, though she had to tread a careful vocal line after suffering from laryngitis. Peter Auty as her lover sang a strong Italianate tenor, but with difficulties in the upper register, and Paul Carey Jones as her brother Lescaut was terrific both vocally and in his excellent stage presence. Stephen Richardson as Geronte was more variable, and although the staging did not allow the young lovers to exhibit any chemistry, the City of London Sinfonia under the baton of Peter Robinson gave the music a lively expression if at times seeming distant from the singers.

By contrast to this contrived staging of Puccini, Longborough Festival Opera opened with a wonderful production of Wagner’s Rheingold in preparation for a new Ring to come. Under the musical direction of Wagnerian expert Anthony Negus both orchestra and singers worked superbly together, and with fourteen soloists this is quite a cast. Singers love to perform Wagner, and Longborough does the English opera world a great service by providing opportunities for the many not the few. This was the second performance, and in a strong cast Mark Stone (Alberich), Mark Le Brocq (Loge) and Madeleine Shaw (Fricka) stood out. Darren Jeffery provided some fine moments as Wotan, though the lower register of the role seemed to lie slightly outside his comfort zone, and among the more minor roles Elliot Goldie sang a very lyrical Froh, and Mae Heydorn an excellent Erda.

Dressed in a costume reminiscent of the angel atop the Siegessäule in Berlin, she appears from nowhere to warn Wotan of the severe perils of retaining the ring, before suddenly disappearing into the background — sheer magic. The largely hidden orchestra and excellent use of lighting by Charlie Morgan Jones allows such sorcery, and the video designs by Tim Baxter are excellent. Valhalla peeps through the clouds, and the approach to the rainbow bridge at the end adds a cosmic touch to Wotan’s dream palace. Director Amy Lane has eschewed clever concepts in favour of a straightforward staging that clearly shows the dichotomy between the worlds of the Nibelungs and the gods, with the giants as interlopers, and the Rheinmaidens as slippery, playful and teasing.

I eagerly await Die Walküre next year, but in the meantime shall report from Longborough later this month on something quite different — Donizetti’s Anna Bolena.