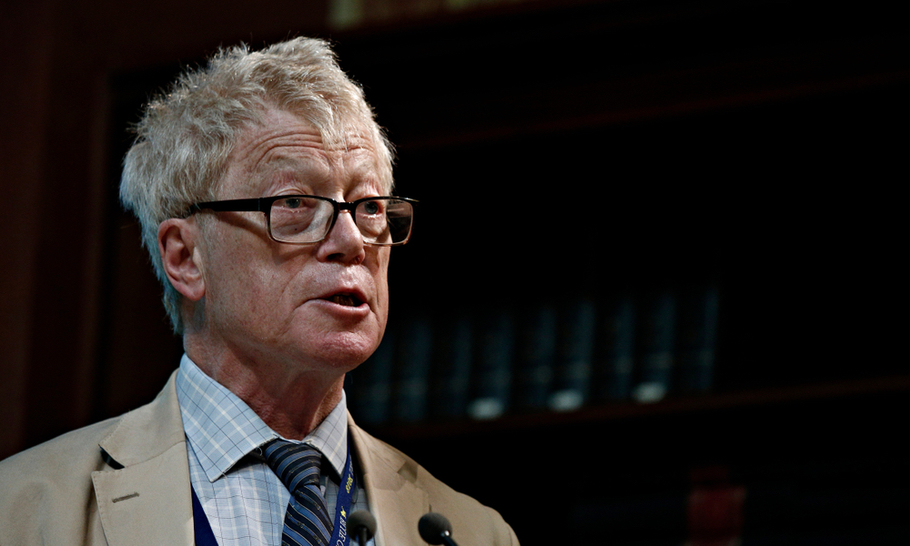 While our European allies gathered in London yesterday for this morning’s Nato summit, in the midst of a general election called to resolve Britain’s relationship with the European Union once and for all, a rather different kind of European occasion was taking place at the Hungarian Embassy. Sir Roger Scruton was receiving the Commander’s Cross with Star of the Order of Merit of the Republic of Hungary.

Our greatest living philosopher was invested with Hungary’s highest civilian honour by the country’s Prime Minister, Viktor Orbàn, at a deeply moving and very European ceremony. Apart from the national anthems, the only formalities were two short speeches by Orbàn and Scruton. The ceremony was deeply moving because Sir Roger spoke from a wheelchair: he is being treated for cancer. And it was very European because a former dissident, now the leader of his country, together with intellectuals from this country, had gathered together to celebrate a man who probably did more than any other member of the British intelligentsia to undermine and ultimately destroy European Communism.

In his eulogy, Orbàn praised “our dear Professor” as a conservative philosopher who had grasped that conservatism was less about theory than practice, that it was not an ideology but the antidote to ideology. Sir Roger had practised what he preached by bravely supporting anti-Communist intellectuals across Central and Eastern Europe, often at considerable personal risk. His work for the so-called “Underground University” has also been recognised by the Czech and Polish Republics, both of which have awarded him their highest civilian honours.

In his reply, Sir Roger spoke without notes and evidently from the heart. He loved the differences between nations, he declared, and rejected any notion of global assimilation. It was these rich cultural differences, formed by often traumatic histories, that made friendships between nations possible and precious. For a conservative of the Scruton school, the ethnic diversity, patriotic identity and peaceful competition of nations is not a threat to Europe, but its greatest glory.

Though only 75 and still very active, Sir Roger’s illness has taken its toll; he is now quite frail. Yet the range and calibre of his philosophical oeuvre is unique. He has contributed to ethics, aesthetics, metaphysics, epistemology, jurisprudence — indeed, almost every aspect of his subject, apart from formal logic. From sexuality to the environment, from animal rights to contemporary architecture, he has brought the entire history of thought to bear on the most contentious and topical issues. He has written novels, composed operas and taught summer schools at his farm. Scruton is not merely industrious, but a one-man industry of ideas.

Yet this extraordinary Englishman, read and recognised across the Continent, has been marginalised at home. Three years ago he was knighted, but he has never been given a chair at Oxford or Cambridge, his alma mater. The fact that three countries of Central Europe have now honoured him ought to remind his own land of his achievements.

It so happens that the death last week of that gallant historian Sir Michael Howard has just created two vacancies in Britain’s two highest orders. Companions of Honour are recommended by the Prime Minister, who should need no encouragement to right the wrong that his predecessor committed when she allowed Sir Roger to be sacked as chairman of the Building Better, Building Beautiful Commission earlier this year, after a controversial interview in the New Statesman. Though the magazine apologised and Scruton was later reinstated to the Commission, the whole episode reflected badly on the Government. If he is returned to Downing Street, Boris Johnson should make amends to Sir Roger while he still can.

The Queen alone has the final say in the Order of Merit, but she would be well advised to appoint Sir Roger to fill the gap. Doubtless there are other worthy contenders for the honour, but there is urgency about this particular case.

There is a precedent, too. Sir Tom Stoppard OM, our greatest living playwright, also distinguished himself in supporting the opposition in his native Czechoslovakia during the Cold War and has dramatised the subject more than once. Sir Tom and Sir Roger might not agree about Europe, but they are both men of European stature. This is a time when the British should demonstrate, by actions as well as words, that we still care about what Europeans think of us. Not the least of Roger Scruton’s merits are the services he has rendered to the reuniting of a Europe that a cruel ideology set asunder for so long.