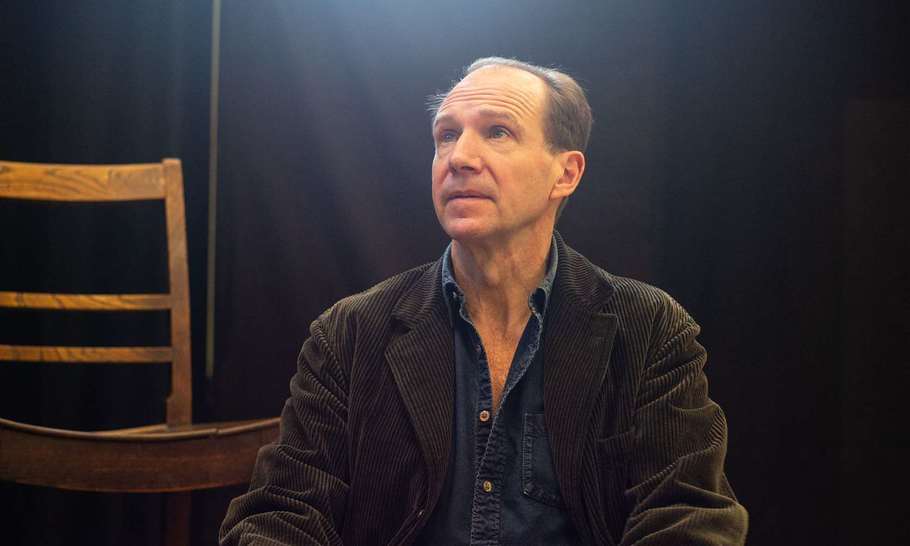 Ralph Fiennes in the Four Quartets 2021

It is rare that the recreation of a classic on stage attains the stature of a national event. Such, however, is the case with the dramatisation by Ralph Fiennes of TS Eliot’s Four Quartets. Quite how the recitation of this most demanding of poems, among the longest and most difficult in the English language, has been transmuted into a gripping theatrical performance, is a mystery. But this is a work that is all about mysteries — time and faith, love and loss, the living and the dead — penetrating the impenetrable more profoundly than any poet had done before. Four Quartets speaks to a nation emerging from a deep trauma. We have one man to thank for seizing the moment to edify audiences around the country. Ralph Fiennes, who directs and performs this 90 minute marathon without an interval, has long been one of our finest actors. Now we know that he is one of our greatest.

The last time that British theatres were dark was during the Second World War. Before the war, our then greatest living poet, TS Eliot, had begun a new career as a playwright, writing in verse, as in Murder in the Cathedral, and in prose, as in The Family Reunion. The latter, published in 1939, ends with the character of Agatha reflecting on the “pilgrimage of expiation” required to redeem a benighted civilisation. Hostilities forced Eliot to return to poetry, but with a new, more dramatic style.

In 1936 he had published Burnt Norton, a long meditative poem that plunges straight into its theme of temporality: “Time present and time past / Are both perhaps present in time future / And time future contained in time past.” The poem evokes an old Cotworlds manor house near Chipping Campden in Gloucestershire — a place full of memories, with a rose garden that, for Eliot at least, was haunted by ghosts, benign but insistent, and the laughter of long-dead children. The poem is complete in itself, but points towards an even more ambitious undertaking — an unprecedented search for meaning, embracing a lifetime’s experience and erudition, tempered by a recognition of our frailty: “Human kind / Cannot bear very much reality.”

Gradually, as the conflict unfolded into an existential struggle for national survival, this first “quartet”, reissued in 1941, was augmented by three more, each published in booklet form. East Coker (1940) was named after a village in Somerset, where the poet had ancestral roots; the church is now the resting place of Eliot’s ashes. “In my beginning is my end.” This poem evokes a rustic wedding, with spectral couples dancing. Fiennes brilliantly embodies this lost primeval paradise.

The earthy world of East Coker was followed by the nautical one of The Dry Salvages (1941), named for a desolate outcrop of rocks off the coast of Massachusetts in Eliot’s native America. (“Salvages”, as Ralph Fiennes reminds us, is pronounced to rhyme with “pages”.) The oceanic theme opens up a mystical exploration of death, culminating in a prayer for those lost at sea and those left behind — a reminder that the Battle of the Atlantic was raging at the time.

After air raid duty at his workplace, the publishing offices of Faber & Faber, Eliot became seriously ill and spent his convalescence in the country. These experiences brought him closer to death and to the ordeal of his adopted homeland, already dear to him on account of his Anglo-Catholic faith. The result is the fourth and last quartet, Little Gidding (1942), which evokes a tiny hamlet near Peterborough, where Charles I had once taken refuge after his defeat at Naseby. This is perhaps the most explicitly patriotic of the four poems: “History is now / And England.”

The Four Quartets, issued together for the first time in 1943, belong in their own idiosyncratic way to the category of war poetry. And yet they transcend their time and place, enabling us in our post-pandemic condition to identify strongly with their themes. Their title is intended to remind us of Beethoven, for these cascades of verses, organised in quasi-movements and uniquely musical in their intensity of abstraction, do bring us as close as language can to the ineffable consolations of the deaf composer’s late quartets. Here we find ourselves “in the still point of the turning world”.

The imagination required to make a performance out of these poems is staggering. Much is due to the set and costume of Hildegard Bechtler. But we owe a huge debt to Fiennes, whose feat of memorisation (Four Quartets runs to 62 pages and more than 8,000 words) is astonishing. It is right, too, that his recreation of this work has been touring the provinces, from Bath to Oxford, Cambridge and Northampton, because these verses are, among other things, a celebration of English country life. No London venue has yet been announced, though it would be astonishing if this unforgettable event did not find a home in the West End.

A capacity audience at the Oxford Playhouse this week forgot all about Covid and the spartan conditions it has imposed on theatres (face coverings must be worn throughout, social distancing before, during and after the performance). At the end, Ralph Fiennes received a standing ovation. For a younger generation he is the dark lord of Harry Potter. Now he is Voldemort no longer, but a great Shakespearean actor who has brought a dead poet alive by resurrecting the Four Quartets in all their glory as balm for a battered nation. This poem is Eliot’s epitaph and this performance might also prove to be that of Fiennes. Catch it if you can.