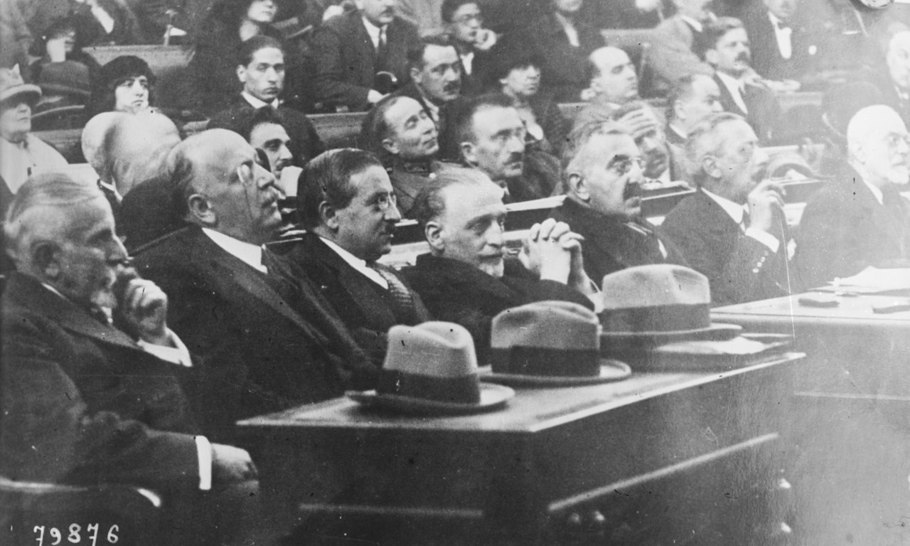 Hemingway forged his innovative style when he was young. The stark, intense and dramatic account of an execution in in our time (1924), one of the best things he ever wrote, conveys sympathy for the victims while narrating their death with apparent objectivity. He was not in Athens when the ministers were executed on November 28, 1922 and relied on newspaper reports for the facts behind his description. But he heightens reality by imagining the wet weather, the traditional hour of dawn and the shuttered hospital. The hard rain, dead leaves and degradation of one victim all accentuate the injustice and cruelty of the tragic event:

“They shot the six cabinet ministers at half-past six in the morning against the wall of a hospital. There were pools of water in the courtyard. There were wet dead leaves on the paving of the courtyard. It rained hard. All the shutters of the hospital were nailed shut. One of the ministers was sick with typhoid. Two soldiers carried him downstairs and out into the rain. They tried to hold him up against the wall but he sat down in a puddle of water. The other five stood quietly against the wall. Finally the officer told the soldiers it was no good trying to make him stand up. When they fired the first volley he was sitting down in the water with his head on his knees.”

Ironically, the ministers are shot against the wall of a closed hospital whose shutters, conclusively nailed shut, echo the Crucifixion. The pools of water suggest the blood that flowed from the bullet wounds. The wet dead leaves in the courtyard, emphasised by the rhetorical parallels, “There were pools . . . There were dead leaves,” foreshadow the inevitable fate of the men. One minister, sick but imprisoned, suffers a humiliating death. Carried downstairs and propped up like a dummy against the wall, he slithers helplessly into the puddle while his silent and impotent colleagues watch him. The officer’s remark, “it was no good,” casts doubt on the ethics of the execution. During the first volley—there must always be a second gunshot to make sure of death — the dead man “was sitting down in the water with his head on his knees,” crumpled up like the broken-down man in Picasso’s Old Guitarist. His undignified death recalls the saying of the Mexican revolutionary Emiliano Zapata, “better to die on your feet than live on your knees.” The firing squad evokes the horrific images of innocent victims in Francisco Goya’s Third of May, 1808 and Edouard Manet’s Execution of Maximilian (1869). 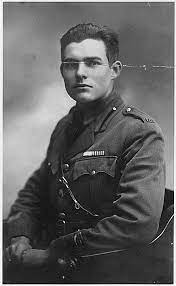 Hemingway (pictured above) intensifies the effect of this episode by eliminating all the essential information that readers would expect to find in a news story. He does not explain who the ministers were, why they were shot, who shot them, when they were killed, where they were killed and what happened after their execution. CM Woodhouse’s Modern Greece (1998) provides the historical background that Hemingway deliberately left out. In October 1920, the Greek Prime Minister, Eleftherios Venizelos, ordered his troops in the Greek city of Smyrna, on the west coast of Turkey, to advance against Mustafa Kemal’s army. On October 25 King Alexander died of a monkey bite and was succeeded by King Constantine. Woodhouse writes, “The army in Anatolia, inadequately equipped and led by inexperienced officers appointed for their loyalty [to the new king], marched on to its destruction.”

The Greek offensive to conquer the Turks, who had been defeated in the Great War, began on June 15, 1921 and after a series of victories reached the River Sakaria in August. It was the final obstacle between the Greeks and Ankara, the Turkish capital, and the line on which Kemal chose to fight. In August, he counter-attacked and won a brilliant victory. Constantine, leading his troops, broke off his assault, and throughout August and September the Greeks were driven 330 miles back to Smyrna. In three months Turkey regained all the territory it had lost in the war.

Woodhouse adds, “While Constantine desperately shuffled prime ministers and commanders-in-chief, the Turks mounted an overwhelming offensive against Smyrna. It began at the end of August 1922 and ended in complete victory within ten days. Smyrna was sacked and looted; every Greek inhabitant who could escape took to the sea; the Greek government ordered the demobilisation of the army and resigned; Constantine abdicated and retired to Sicily, where he died four months later.” After the withdrawal of Greek troops and civilians from Turkey, the military junta who had seized power in Greece needed scapegoats. In what Woodhouse calls “one of the most lamentable and uncharacteristic acts of modern Greek history”, five senior, pro-Constantine ex-ministers and one general (not six cabinet ministers) were put on trial for their lives before a military court of eleven officers. 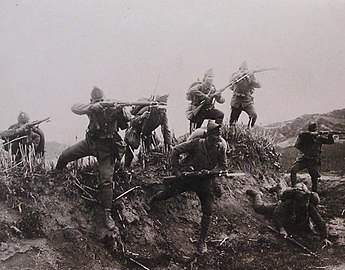 In October 1922 Hemingway reported on the Greco-Turkish War (pictured above) and in November he was at the Lausanne Conference, which ratified the territorial acquisitions after the Turkish victory. The war was over before he arrived in Turkey and he never reached Anatolia or Smyrna (pictured below). But his powerful short story, On the Quai at Smyrna, vividly describes the retreat and evacuation of the Greek army from that city, which enabled the Turks to burn down the Greek quarter and massacre the civilians. When the fleeing Greeks couldn’t take their mules with them, they broke their legs and pushed them into the water. In another brilliant vignette of in our time, “Minarets stuck up in the rain out of Adrianople,” Hemingway described the horrific conditions of the refugees. They were forced to leave Turkish territory after the defeat in Anatolia and driven on foot to seek safety across the Greek frontier. 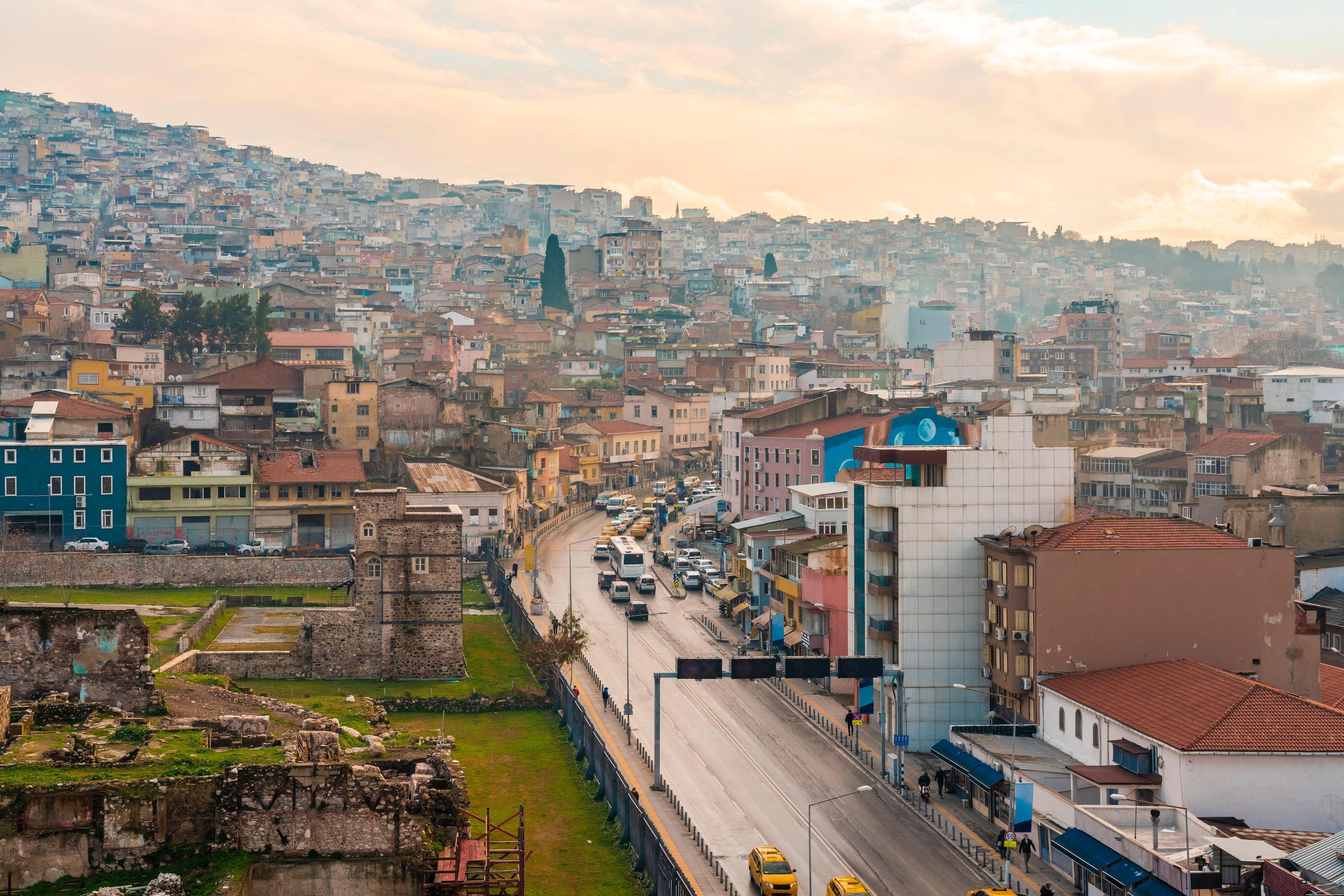 In a dispatch to the Toronto Daily Star on November 3, 1922, three weeks before the execution, Hemingway explained what he’d deleted in the vignette:

“When Constantine came into power all the officers of the army in the field were suddenly scrapped, from the commander-in-chief down to platoon commanders. Many of these officers had been promoted from the ranks, were good soldiers and splendid leaders. They were removed and their places filled with new officers of Constantine’s party, most of whom had spent [World War I] in Switzerland or Germany and had never heard a shot fired. That caused a complete breakdown of the army . . . Artillery officers who had no experience at all took over the command of batteries and massacred their own infantry . . . That is the story of the Greek army’s betrayal by King Constantine who was responsible for the Greek defeat.”

Constantine had fled and was no longer available. But the junta arrested almost all the politicians who had briefly served in consecutive governments during the Asia Minor campaign. These men were held responsible for the military defeat and tried for high treason. The popular Venizelos had initiated the disaster but was not in office when it occurred, so Constantine’s ministers were blamed for the catastrophe. The accused included three former prime ministers and only one soldier, the white-haired and goateed General Georgios Hatzianestis, Commander-in-Chief of the Greek army in Asia Minor.

Despite Greece’s promises to the Allies, the trial from November 13 to 27, 1922 was not fair. The accused were denied access to important documents, a long written defense by Dimitrios Gounaris was not admitted and his plea for medical postponement was rejected. Though Gounaris was sick during the trial and the mentally ill General believed his legs were made of glass and easily shattered, neither illness nor madness saved them. All six once-powerful defendants were sentenced to death, and there was no appeal. The British government called the trial judicial murder, and the New York Times compared it to Robespierre’s slaughter during the French Reign of Terror.

The tall, thin Prince Andrew, brother of King Constantine, had been commander of the Second Corps in Asia Minor. He was first sentenced to death and then, after pressure from his blood relations in the royal families of Europe, banished from Greece for life. The prince and his family, including the one-year-old future Duke of Edinburgh who was carried in a wooden vegetable crate, were evacuated on a British cruiser and sailed from Corfu to Brindisi on December 4.

One eye-witness foreign reporter, who signed himself S.S.P., described (in the Current History Review of April 1923) the execution that was hastily carried out, before protests could mount, at 11am on the day after the sentence. “Gounaris was in a clinic suffering from typhoid when the sentence was issued, but at 7am three trucks full of policemen called on the hospital and transported him to the Averoff prison trembling with fever and wrapped in a blanket.” At the prison in northern Athens, named for the Greek benefactor who paid for it, “Gounaris, white-pale from his sickness and staggering, had to be supported.” The army was eager to shoot him before he died.

Like a character in a Greek tragedy, “Nikolaos Stratos, in parting from his son, was heard to say, ‘You will have my curse if you ever interfere in politics.’” Two of the old victims polished their monocles as if to see more clearly, and calmly or nervously puffed their last cigarette. One officer, degrading the General, declared: “You are unworthy to wear the military insignia,” and tore off his medals. The number five kept recurring as the five standing men were placed in a straight line five meters from each other, and the five-man firing squad stood five meters from the prisoners. They all refused to be blindfolded when faced with death. The commander raised his naked sword and shouted, “Attention! Take aim! Fire!” A sixth soldier fired shots through the heads of the dead men. As the reporter followed the truck carrying away the corpses, he saw through the flapping back curtains “the white-haired head of Protopapadakis moving to-and-fro with the jerks of the camion,” as if he were still alive.

In 2010, 88 years later, the Greek courts reversed the convictions and ruled that the victims had been incompetent but not treasonous: “They had been scapegoats to appease public anger at the humiliation that the Greeks had suffered. They had no desire to see Greek forces defeated, and had been in reality just victims of circumstances they were unable to control.”