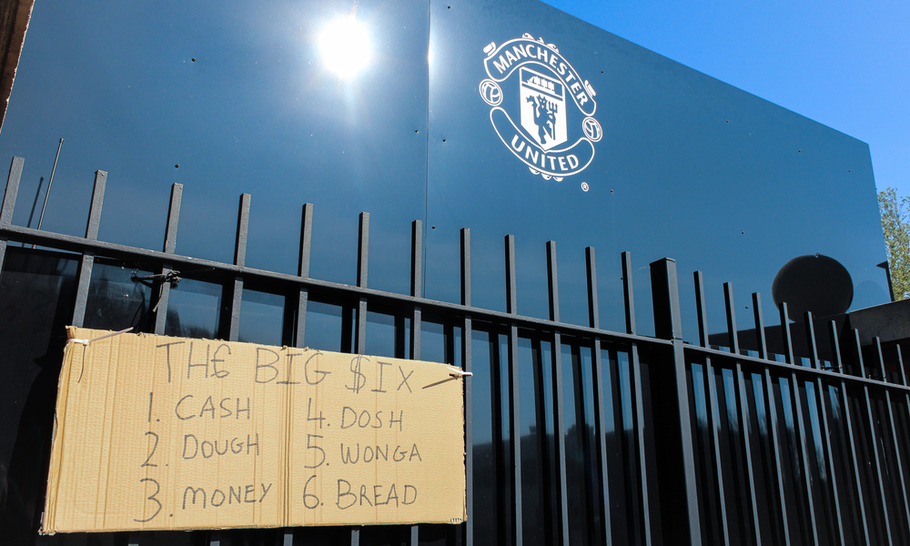 The Super League football fiasco, with its pleasing echo of David defeating Goliath, bears thinking about. Stephen Rand kicked off last week with some thoughts on what the affair said about community today. It said a lot.

Television and radio’s vox pop, with a microphone shoved under the nose of  citizens going about their lawful occasions, is mostly depressing and irritating. A cheap substitute for the experts and their analysis?  Media folk virtue signalling  by listening to the public? “How do you feel about 20 per cent of the young people in your town being unemployed?” Ask a silly question and you’ll get a silly answer, as my mother-in-law used to say. Yet “how do you feel about the Super League” uncorked passionate responses: thoughtful, lengthy, essentially moral and political — with a small “p”.

The responders’ reactions were not of shock or surprise at the venal nature of Premier League football. This has been known since at least the 1980s, when the investigative journalist Geoff Seed’s World in Action 1980 documentary on Manchester United showed how, in anticipation of the forthcoming massive commercialisation of club football, United’s owners were dubiously buying up shares like they bought up boy footballers. The greed-led failings of UEFA and FIFA are also well known. But to the indignant fans the Super League was a step too far.  And it helped that the step was being taken by billionaire owners, who happened not to be British.

In his documentary Geoff Seed, third of five generations of Manchester City fans, reflecting on the public outcry, shared his own memories of what football had meant to working class communities. Supporting your local club had cemented relationships between the generations in families. Shared experiences and memories built community. In the 1930s his great aunt was given lifts to away matches by first team players. Difficult to imagine today. In the late 1950s Burnley’s chairman Bob Lord — known by some as the “Khrushchev of Burnley” — who epitomised the mill-owner mentality of football chairmen, tried to peg players’ salaries to £20 a week. Football as a sport had changed almost beyond recognition by 2021, but the old values were being demonstrated by fans outside glittering stadiums that are now home to the six British clubs who proposed to join the Super League.

Community, though, was not the only value asserted by protesting crowds. There was the threat to the relationship between the minnows and sharks of football. The Super League would have spelt an end to redistribution of wealth from TV rights and merchandising, from the world of players on £200,000 or more a week to the struggling little clubs. And a sharp reduction in support for the promotion of football among young amateur footballers.

Making a different point, fans complained that sealing off the elite teams within a new League would kill football’s drama. There would be no more giant-killers like Leicester City. Where would be the rewards for courage, skill and dedication? Where the punishment for their absence? What would happen to the merit in football’s meritocracy?

The contrast between the top football club owners and fans was stark. Local versus international, “somewhere” people versus “anywhere” or “nowhere” people, the football born in traditional working class culture — now a part of national identity — against that of international elites, sharing versus greedy exclusion. It was as if the dilemmas at the heart of British politics had been prised open, the choices laid bare. Yet the angry interlocutors who understood and defended their values within competitive sport did not seem to relate such values to wider society and to the possibility that such values might be voted for and inform government.

The recent protests were not the first time aroused fans had taken decisive action against greedy owners. The reaction to Malcolm Glazer’s takeover of Manchester United in 2005, landing the club with responsibility for loans he had taken out to buy it, resulted in the formation of the “Red Rebels” and of the break-away FC United of Manchester. The new club was fan-led and fan-owned.

For some overt politics you need to go north of the border, to Celtic’s “Green Brigade”. The club’s origins in the 1880s were charitable, helping the underdog, the newly arrived Irish immigrants. Palestinian flags appeared during a 2016 match against the Israeli champions, Hapoel Be’er Shiva, in protest at Israeli government human rights violations, incurring a UEFA fine for illicit use of banners. Fans reacted by crowd-funding two Palestinian relief organisations, matching the fine. Then there was the reaction to the Lazio “Ultras” and the Lazio-Celtic match of 24 October 2019. Fascist salutes and rival mocking of Mussolini in Glasgow streets and on the terraces brought back 1930s-style confrontations. Wider politics has always passed through the Celtic turnstiles.

The Super League fiasco does seem to show that popular culture in Britain is not politically inert, nor a kind of ethical desert of indifference and inaction. The current national campaign boycotting social media carrying racist comment on matches shows the wider influence of Black Lives Matter — and clubs and players seeking some moral credibility. We may want to keep politics with a big “P” out of sport — though boycotting South African teams during apartheid did undermine the assurance of white supremacy — but sport is too important a part of national life for it not to be a channel for the expression of values. The question is: why aren’t the values we’ve seen popping up about the Super League in vox pop also surfacing as people disclose their voting intentions for the elections this May? And, as our democracy is eroded, why are these values not transferred to electoral engagement, judgement and action?

One answer might be that throughout all the different forms of media, sport is reported in great detail, factually and analytically. Fans can verify coverage and reporting itself benefits from the willingness of fans to digest and share complex information which can be fitted into explanatory frameworks that have real meaning. On the other hand, access to politicians, even for political journalists, is limited. On the job, they are met with “gaslighting”, obfuscation and refusal to answer questions. Facts are in short supply; instead there is the latest spin, lies, scandal and cover-up. In the face of instances of downright biased reporting, the public begin to doubt their own perceptions, memories and understanding of events. Many are reduced to simple propositions. “Voting makes no difference.” “Politicians? They’re all the same.” But are footballers, coaches, managers, referees and owners all the same? The crowds of rejoicing fans last week indicated that the public doesn’t seem to think so. And they’d vote out the owners if they had the chance.