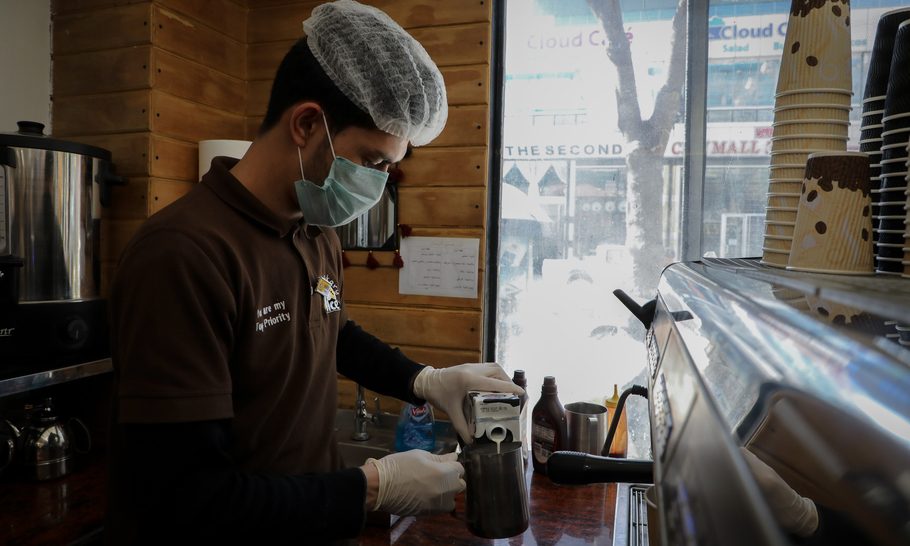 The people of Afghanistan once again find themselves in the midst of a public crisis.

Unlike the other, ongoing worries — a still-unresolved election and a shaky peace deal with the Taliban — Afghanistan is not alone in the global panic over the spread of coronavirus.

For the first time in decades, Afghanistan’s 32 million people face a challenge that’s shared by some of the most wealthy, powerful nations in the world, including those that provide military and financial assistance to the government in Kabul.

Though the current number of coronavirus cases in the country is still relatively low — so far 34, spread across several provinces — the government’s inability to extend its reach across the nation leaves many people unconvinced by such a low figure. And there is another low figure on people’s minds — Afghanistan has only three doctors per 10,000 people.

Whereas other nations are able to implement citywide quarantine, Afghans fear that their nation — which has two men claiming to be president — lacks the control and authority to enforce any restrictions.

On Sunday, the Minister of Public Health, Ferozuddin Feroz, urged the government to lockdown the western city of Herat, which is home to at least 16 of the 34 confirmed cases in the country. Feroz and others say ordering such large-scale quarantines is important because people in the nation’s urban centres have yet to fully practice the social distancing that has become common around the world.

Sitting in a Kabul café, a photographer put it quite simply. “We need to build confidence in the people. Right now, people are afraid to get tested because they don’t know what the disease is, nor do they understand how quarantine will be implemented. The government hasn’t done enough to inform the people and earn their trust,” she said.

Earlier this month, there were reports that dozens of patients escaped from quarantine in the provinces of Ghor, Herat and Balkh. According to an official from the province of Herat — currently home to the largest number of positive cases — one man in Ghor province was told, “Anyone who tested positive for corona will be killed.” That’s why he ran. There are also reports that patients in Herat were told that if they succumb to the illness, they will not be given a proper Muslim burial.

Still, there are people who are trying to fill in for the government’s shortfalls.

At the café, where Kabul’s well-to-do youth often gather, the staff took action by replacing ceramic coffee mugs with paper and plastic takeaway cups and ordering all workers to wear protective masks and gloves.

“Yes, we’re afraid for ourselves, but we’re all doing it for our customers. We don’t want them to get sick,” one of the waiters said. In recent weeks, the number of people in the café has dropped off to a mere handful.

The waiter also said that customers here, who can afford 300 afghanis for a single item on the menu, are likely more informed than the rest of the population. But efforts must be made to inform the entire country, particularly in rural areas.

Of course, reaching rural areas poses its own challenges.

In 2018, it was estimated that up to 70 per cent of the population lacks access to reliable energy and that 90 per cent of those without access to electricity live in rural areas. Further, the government’s reach in the nation’s districts is very limited. Making matters worse, many of these districts are under the direct influence or control of the Taliban.

According to one report, the Taliban in Faryab province, north of Herat province, which shares a border with Iran, have ordered anyone returning from Iran to self-isolate for at least 15 days.

The spread of the virus has also led to anti-Chinese sentiment in the country. A common refrain about China being the epicentre of the disease invokes an all-too familiar racist trope about the uncleanliness of Chinese cuisine.

In an effort to address the information gap, a group of doctors helped draft a Friday prayer service for the nation’s mosques that not only addresses preventive measures but also invokes the sayings of the Prophet Muhammad to encourage people to take the health threat seriously.

Though nations like Morocco, Libya, Turkey, Lebanon and Egypt have all placed a temporary restriction on communal prayers, no such restrictions have been placed on Afghan mosques.

In recent days, the government has taken some preventive measures. These include: closing all public and private educational institutions for at least a month; halting all public sporting events; and putting a temporary ban on all wedding and engagement ceremonies, which can often see more than a thousand people gathering in a single wedding hall.

Still, with Iran being one of the nations most affected by the disease, residents fear that the government may not be able to prevent the virus from crossing the border.

These fears are best embodied by a refrain that has become all too common in a nation that has had to deal with 40 years of non-stop political upheaval and violence: “The war and bombings didn’t kill us, but coronavirus will.”