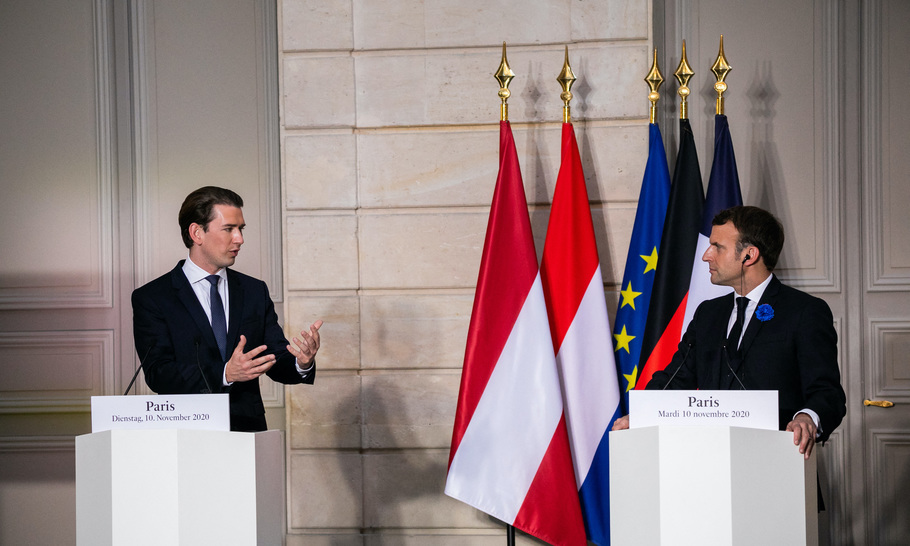 Border anxiety is back. While the British media have been focused on Biden and Covid-19, across the Channel two different concerns are rising up the agenda: migration and terror.

Earlier this week the Austrian Chancellor, Sebastian Kurz, and the French President, Emmanuel Macron, held an emergency summit in Paris, following last week’s bloody assault on Vienna and the subsequent crackdown on Islamists. The two leaders were joined on video by Germany’s Angela Merkel and Mark Rutte of The Netherlands, along with the EU presidents Charles Michel and Ursula von der Leyen.

The main upshot was a clear consensus that borderless travel within the EU must end unless the external border can be greatly strengthened. The recent attack on Nice was carried out by a Tunisian migrant who had entered the EU through Italy. More than 900 migrants are known to have drowned in the Mediterranean this year and the true figure is bound to be much higher.

“To be honest, I am worried about Shengen,” the Dutch PM admitted. The fact that even the most liberal leaders in Europe are gripped by border anxiety, at a time when Covid-19 in any case has practically halted travel for the foreseeable future, speaks volumes. When the Continent eventually emerges from the pandemic, attitudes to open borders are likely to have altered permanently.

The UK and the EU, meanwhile, are still haggling over the terms of trade after Brexit. For many people, however, the question of how easy it will be to take quick city breaks or holidays in the sun is rather more important than the dispute over fishing rights that seems to dominate the talks. Actually, the underlying issue there, too, is about borders, on land and at sea. If we end up with a no-deal Brexit, the culprit will be border anxiety on both sides.

A glance across the Atlantic confirms that President-elect Biden will also have his hands full dealing with border anxieties of one kind or another. The obvious one is the Mexican frontier, where Trump’s Wall was never built but his rhetoric deterred so many that illegal migration fell of its own accord. That is bound to change and Biden will have to decide whether to deport or amnesty millions of undocumented immigrants. No less significant, however, are the invisible borders that the US must police all over the world: in the South China Sea and the Gulf, in airspace and in cyberspace. The Biden administration will quickly have to draw clear boundaries so that the enemies of the West are in no doubt about where their incursions must stop.

It isn’t all bad news on borders. The resumption of flights to and from Tel Aviv across the Arabian peninsula was one result of the Abraham Accords, signed earlier this year by Israel and the UAE, followed by Bahrain and the prospect of Saudi Arabia joining later. Islamist attacks on Saudi targets have been stepped up, most recently on the Kingdom’s embassy in The Hague, but the rapprochement between the Sunni Arabs and Israel now has too much momentum to be halted by isolated acts of terrorism. The ironical fact is that border anxiety is less pronounced in the Middle East than elsewhere because there is no uncertainty there about the readiness of governments to police and, if necessary, defend them. Having drawn lines in the sand and shed so much blood to make states and frontiers real, the region is confident enough to lift a few of the most onerous restrictions on travel. But the rapidity with which seemingly well-established polities such as Syria, Libya, Lebanon and Iraq have disintegrated in recent decades is a warning against naive optimism. The Biden administration will be less averse to state-building than that of Trump, but there will be no return to the interventionism of the Clinton and Bush years. Wilsonian internationalism is well and truly defunct.

Border anxiety is indeed back, but physical borders are less insuperable than psychological ones. The post-Covid world has an opportunity to rebuild itself, if not from scratch, then at least without the scars that are left by war. The leaders of the West may, if they wish, create a tabula rasa on which to erect a new architecture of international relations. The only answer to border anxiety is to make borders secure yet permeable. Britain can play a key role in setting such a process in motion. As the greatest of all imperial powers, our ancestors were responsible for creating more states, including their frontiers, than any other country. We British have a duty to make it our mission to allay the border anxiety that now stalks the dangerous corners of the earth. The prize of success is peace; the penalty of failure is war.