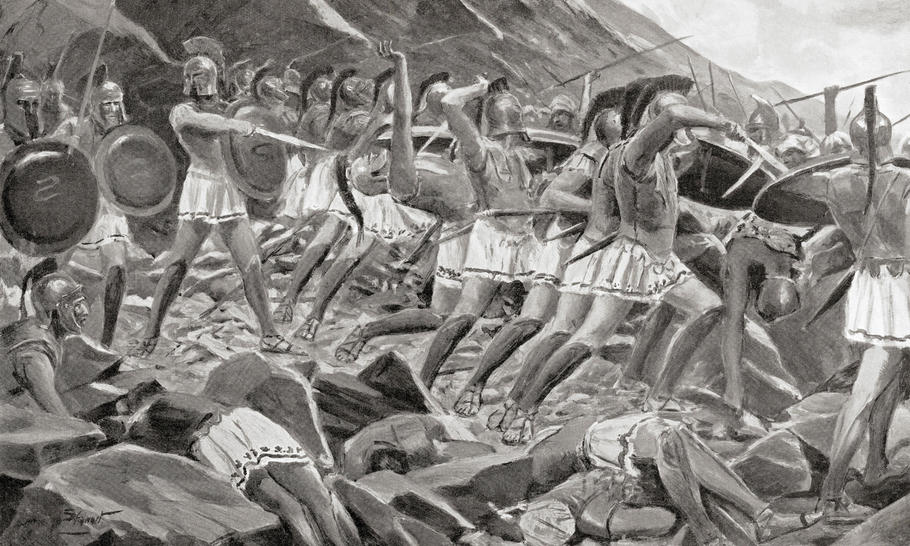 I visited the Victoria and Albert Museum’s Epic Iran show last week. It is an excellent exhibition, showcasing the long and rich history of Iran. The part of it that most interested me concerned the Achaemenid Empire, better known simply as the Persian Empire. This empire, founded by Cyrus the Great, is best known to the West for its invasion of the Greek city states and especially the Battle of Thermopylae. That battle is one of the foundation myths of the West: the brave Spartans, led by King Leonidas, resist the hordes of Asia, fighting to the death for their freedom. Their sacrifice buys time for their Greek comrades, who eventually triumph and their victory leads to the Western world we know today. Perhaps some of the over-educated American generals and their classically-minded British counterparts see themselves as the successors to Leonidas and his 300 warriors. This is ironic, as in the context of Afghanistan, the West is very much the Persian Empire and it is the Taliban who are the Spartans.

Xerxes, the King of Kings, had vast power and wealth, with various satraps who paid homage to him. Today Joe Biden remains the most powerful man on the planet, with vast military and economic resources at his disposal. Like Xerxes, he is surrounded by courtiers and flatterers who service his every whim. His satraps are Boris Johnson, Angela Merkel and Justin Trudeau. If you doubt they are satraps, just look at the House of Commons attacking Biden on Afghanistan and Downing Street leaking against him. What happened a week later? Boris and the rest of the G7 were begging Biden to keep US troops at the Kabul airport beyond the end of August deadline. Biden dismissed the British Prime Minister as Xerxes would have done with some fat whining King of Cyprus. The Persian Empire, like the West, was an economic superpower, which looked down on the more primitive Greeks in general and the austere fanatics of Sparta in particular.

While Greek propagandists portrayed the Persians as heartless despots, the Persian Empire had its own version of the human rights the West likes to go on about. On display at the Epic Iran exhibition is the famous Cyrus Cylinder. This remarkable object sets out the great achievements that Cyrus has done for the people he ruled and has been interpreted as historical evidence for Cyrus allowing the Jews to return to Israel from Babylonian exile. Nothing like this has ever been found in relation to Sparta; for a start they could not have cared less for the welfare of the few people they ruled over, just as the Taliban have not respected religious or ethnic minorities.

The Taliban mimic the Spartans in their dedication to conflict and their willingness to suffer. The heroic nature of Spartan resistance at Thermopylae has often caused their fanaticism to be overlooked. Like the Taliban, their way of life was fighting: everything else was subservient to it. Sparta had no city walls because the Spartans would fight off any invaders, refusing to be besieged by them.

Then there is the military. General Milly, Head of the US Joint Chiefs of Staff, and General Sir Nick Carter, Chief of the UK Defence Staff, would have known how to serve a Xerxes. Persian generals were also politicians, just as the West ’ s are. They would no more engage in the actual fighting than Milly and Carter would. When General Carter was serving in Afghanistan in 2010, he was criticised by the US General Dan Bolger for not visiting his men on the front line. Meanwhile General Milly has smoothly shifted allegiance from Trump to Biden, something Trump has commented on in unflattering terms.

As in the Persian army of Xerxes, it is the perception of military power, not the reality that really mattered. The US and UK defence establishments may dress up their concerns over Afghanistan in terms of women ’ s rights, but what they mainly care about is how they have been humiliated and all their billions of dollars of military spending have been useless against a low-tech but determined enemy.

There is even a feminist angle. Xerxes became King of Kings as much due to his mother as his father. His father Darius was a usurper, but his mother, the formidable Atossa, was the daughter of Cyrus the Great. His accession meant that the royal line was restored. American politics is noticeably dynastic, with the Kennedys and the Clintons, the Bushes and now the Trumps. I am sure that Hillary Clinton and Atossa would approve of one another.

Of course, eventually the Persian Empire, like the West, tired of fighting the barbarian Greeks and withdrew. Eventually it was not the Spartans who conquered the Persians, but the equally warlike Macedonians, led by perhaps the greatest warrior the world has ever seen: Alexander the Great. This can ’ t happen to the West, can it? There is no military competitor, only an economic one, in the form of China. Although I do wonder: has President Xi read a biography of Alexander the Great?