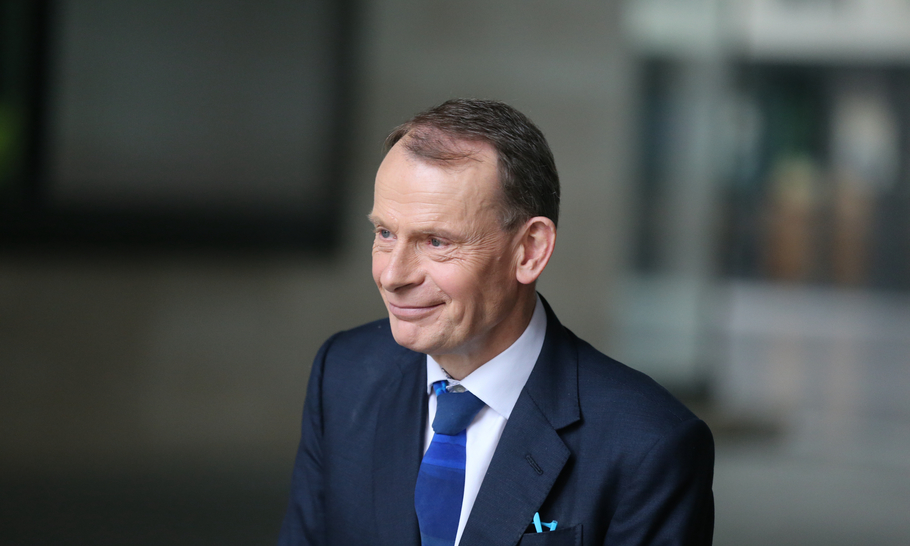 To mark the BBC’s centenary this month, Andrew Marr has written a long article about the Corporation for The New Statesman. He seems a reasonable choice, perhaps even an obvious one. He was the BBC’s political editor for five years (2000-5), a good choice for the Blair years, and then presented The Andrew Marr Show on Sunday mornings for the next sixteen years as well as numerous other BBC programmes, on television and radio. He was a safe pair of hands, smart, often impartial and covered a lot of ground from Darwin to modern British history. And he is now the New Statesman’s star columnist.

But, perhaps surprisingly, Marr wasn’t such a good choice to write a four-page article on the BBC. First, there are plenty of better candidates: Roger Mosey and Mark Damazer, both regular New Statesman contributors on the state of the BBC, especially BBC News programmes, David Elstein, the former TV executive at Thames, BSkyB and Channel 5, and author of a devastating review of Jean Seaton’s Pinkoes and Traitors – the BBC and the nation 1974-1987, John Wyver, a brilliant arts producer and writer about TV and culture, or the TV historian and former BBC producer David Hendy (whom Marr cites).

Second, and more serious, Marr’s piece is short on evidence and long on opinion, and the opinions are rarely interesting or original. His essay is full of slack assertions. “I’d never watch it [Doctor Who] now, so strong are my memories of cowering in terror behind the sofa when the Daleks first arrived.” That’s hardly the kind of thoughtful appraisal of one of the all-time great BBC series one might have hoped for. Or, in the next paragraph, this sentence: “Even the rage of BBC-haters feels like that of the curdled disappointment of a child at a wilful parent.” Are critics of the BBC (most of whom are certainly not “BBC-haters”) to be dismissed as children? Or do they have important arguments that defenders of the BBC should engage with (as Roger Mosey did so well in his recent book, 20 Things That Would Make the News Better)?

Later, Marr refers to “staid historical dramas on the Tudors [not named] or Forsytes”. What was “staid” about the prize-winning Forsyte Saga, watched by eighteen million viewers, or The Six Wives of Henry VIII or Elizabeth R? No explanation is offered. The BBC website, “BBC 100” takes a rather different view: “The international success of The Six Wives of Henry VIII led to the making of Elizabeth R, and established the BBC’s position as the pre-eminent producer of period drama.”

Two paragraphs later we are told, again without evidence, that David Attenborough “is concluding [his career] as Greta Thunberg with better camerawork”. This is a flippant way of describing Attenborough’s concern for the environment — surely the greatest issue of our time.

Halfway through the third page of his piece, Marr finally starts to discuss some specific points. “On race,” he writes, “the BBC works very hard today to elevate and promote presenters and reporters of colour.” He is right to name Mishal Hussain, Amol Rajan and Clive Myrie, among others. But what about the BBC Board or Channel Controllers? How many Director-Generals of the BBC have been people of colour? And when Marr talks of “race”, he doesn’t seem to include Jews — which might explain why he doesn’t discuss why so many Jews criticise BBC news programmes for their anti-Israel bias and failure to properly engage with antisemitism on the Labour Left. It is only a few days since Ofcom ruled that the BBC “failed to observe its editorial guidelines on due impartiality and due accuracy” in its reporting of the Oxford Street Chanukah attack, when a BBC news report blamed the Jewish victims.

Then Marr addresses other kinds of political bias. “Several generations of Conservative politicians,” he writes, “have believed that the BBC is engaged in a campaign of liberal propaganda…” “Liberal propaganda” or Left-wing bias? They don’t sound the same to me. Are these politicians (and many others) right to think that BBC dramas and news programmes have been guilty of political bias? Where’s the evidence or the analysis? Why are there no examples of programmes which have been accused of bias?

This leads Marr to the cosy conclusion that “I have never come across a media organisation more punctilious about avoiding party-political bias…” Does this mean that the BBC is more or less concerned about political bias than it was twenty or thirty years ago? Since Marr doesn’t name any presenters, reporters or programmes in this section, it’s hard to assess his argument, but he makes no effort to examine or refute specific allegations of bias. Then we get this: “Almost everything alleged against BBC journalists by conspiracists of the right or left is hooey.” Are critics calling for impartiality simply to be dismissed as “conspiracists”? Are their arguments really just “hooey”?

When a Newsnight presenter claimed that Michael Gove had compared Brexit with the Fall of the Berlin Wall (which he didn’t), did the programme apologise for misleading viewers? When Emily Maitlis thought she was entitled to speak for the nation about Dominic Cummings, did she apologise on air? When people are concerned that a number of BBC correspondents over many years misled viewers and listeners about the conflict between Israel and Palestinians, is that, too, just “hooey”? On one of his programmes on 8 April 2018, Marr himself said “lots of Palestinian kids” had been killed by Israeli forces. After complaints, BBC management subsequently ruled that Marr breached editorial guidelines, that the statement lacked any evidence and “risked misleading audiences on a material point”.

Towards the end of his New Statesman article, Marr writes that the BBC “is an enormous, lumbering and often dysfunctional organisation” and that “this can make the BBC a difficult organisation to work for”. That is true enough, though as ever short on specifics. But what really makes the BBC “a difficult organisation to work for” is that it has historically failed to properly represent various minorities, either on-screen or in positions of power within the BBC itself; that it has not always dealt properly with bullying; that in the last 25 years it has been less adventurous in its arts and drama output than it used to be.

It is only fair to say that Marr finishes on a high note. “Many of us will love the BBC more,” he writes, “when it toughens up its news agenda. More facts and fewer tears, please, Auntie; more information about what actually happened, less emoting…” But in general this is a very uncritical assessment of the BBC at one hundred.

Marr’s New Statesman essay is short on facts and detailed analysis of specific programmes. Above all he seems curiously reluctant to provide a proper assessment of the growing allegations of bias in BBC news programmes.