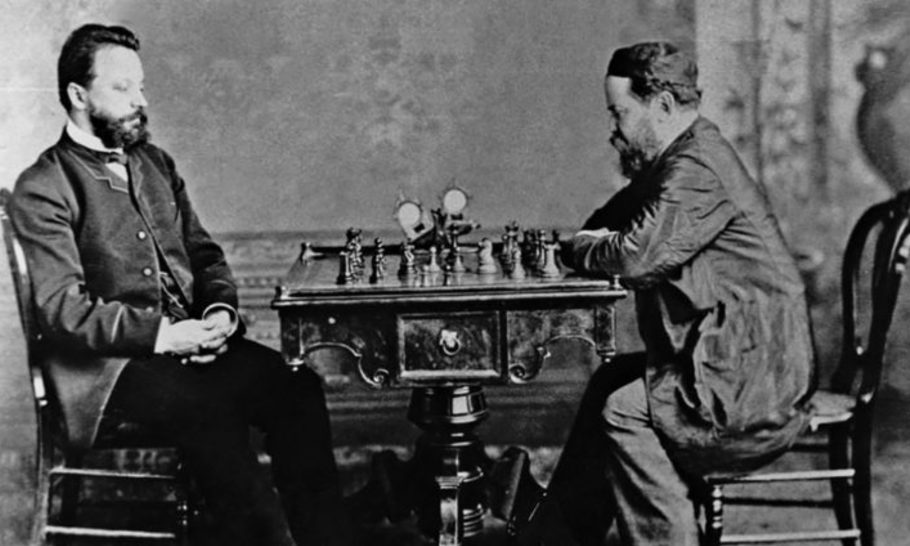 Aron Nimzowitsch ( 1886-1935), author of the chess players’ strategic bible My System, emerged from a 19th-century tradition of great Jewish players of the game. Much like Marx for economics and Freud for psychology, they tried to explain chess in a formulaic fashion that enabled them to plan ahead.

Wilhelm Steinitz, world chess champion from 1866 to 1894, sought to extract rules of positional play from the chaotic tactical struggles of most of his forebears. Dr Siegbert Tarrasch, who was at least Steinitz’s equal as a player, though never himself world champion, went further. Tarrasch codified, or sought to codify, the lessons which Steinitz had distilled, while purging some of his great predecessor’s more opaque beliefs. He became known as the Praeceptor Germaniae, the “chess teacher of Germany”.

Where Tarrasch erred, the fault lay in his dogmatism. Thus, having successfully employed the line 1e4 e6 2d4 d5 3Nd2 in the French Defence on numerous occasions, Tarrasch suddenly encountered the defence 3….c5. He promptly declared the whole variation “refuted” from White’s point of view, because Black can now obtain an isolated queen’s pawn by force. Tarrasch actually used the German verb, widerlegen, which literally means to refute.

This is dogmatism run riot. Tarrasch naturally attracted excoriation from a third Jewish grandmaster, the ambitious and iconoclastic young Nimzowitsch, who offered his own smorgasbord of chess theories, while energetically undermining those of the Praeceptor Germaniae. Nimzowitsch’s lexicon of strategic discoveries and theories included the blockade, overprotection, and “the mysterious rook move”. His most telling dictum? “The beauty of a chess move lies not in its appearance, but in the thought behind it.”

This pronouncement struck a peculiar resonance with me on a recent trip to Venice, where I took the opportunity to visit a dual exhibition by the distinguished Jewish potter and author of The Hare with the Amber eyes, Edmund de Waal. In two venues, the Hebraic Museum in the old Venetian Ghetto, and the Ateneo, adjacent to La Fenice, the Venetian opera house, De Waal sets out a series of broken white shards. They are suffused with gold leaf, and all encased in vitrines, wherein are concealed writings and sacred texts in the languages of the Ghetto: Hebrew, of course, Italian, Turkish, German, Spanish and others. The shards and texts evoke the common currency of trade, literature, worship and daily discourse in a long vanished community.

I was more profoundly struck by the smaller of the exhibits, that in the Ateneo, dedicated to lost libraries and forbidden books. It includes not only De Waal’s hermetic, pale and ghostly shards, but shelves of books, selected by virtue of their having been suppressed, banned or even burned at some point in their literary existence. Guests are invited to write their own message inside any book they choose.

I selected a volume by Stefan Zweig, the Austrian-Jewish émigré author of Schachnovelle (variously translated as The Royal Game or Chess: A Novel) and Sternstunden der Menschheit (Decisive Moments in History), which I had first read at the age of 17. It felt particularly poignant to inscribe on the flyleaf of a Zweig masterpiece a message about the suppression of writers. He was one of many whose opinions and style have unexpectedly fallen foul of those controlling the levers of publication, and, potentially fatally, those of government and power.

The game I have chosen comes from my own book on Nimzowitsch and shows in clear fashion how a seemingly ugly retreat (…Qh8) may in fact be the prelude to a victorious counterattack. The link is here. Readers will observe from several of the comments in the debate that much prejudice still haunts this great Jewish chess writer and player.

For example, Nimzowitsch is accused of being unable to beat strong opposition. And this of a man who did, in fact, inflict defeat on the world champions Lasker, Alekhine and Euwe, as well as title challengers such as Tarrasch himself, Frank Marshall, Karl Schlechter and Efim Bogolyubov. Perhaps one detects, even here, the lingering influence of those forces which destroyed much of Nimzowitsch’s culture (and that of De Waal) and which burned the books.

Below you will find the link to Mannheimer v Nimzowitsch with my notes and some online debating points, to which all readers are welcome to contribute. The format enables you to join the debate, if you wish and, of course, play over this remarkable game on your screen, without recourse to following the moves with physical pieces and a board.