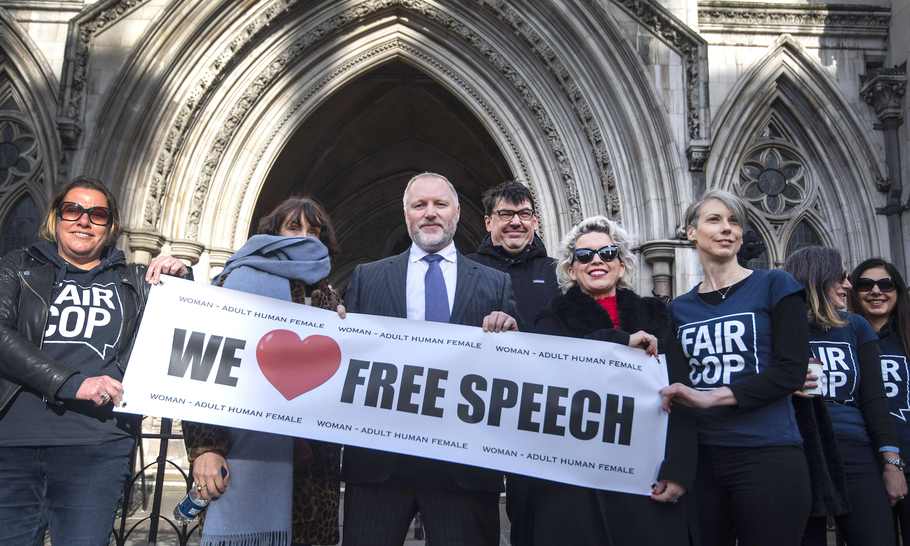 “The only purpose for which power can be rightfully exercised over any member of a civilised community, against his will, is to prevent harm to others.” John Stuart Mill

This is a central tenet of classical liberalism as conceived by Mill. Known as the “harm principle”, it means that no restriction should ever be placed upon an individual’s freedom unless they intend to do physical harm to another human being.

The 21st-century version of Mill’s classic dictum could now be referred to as the “offence principle”. In a time when debate is often shut down due to someone espousing an offensive or “hateful” opinion, it would seem almost anything can be classified as hateful. Today this is not just confined to social media or university campuses — it appears to define the operational guidelines of our modern day police.

For a number of years the police have been recording a wide range of normal everyday conversation and speech as “non-crime hate incidents”. All that is required is for the alleged victim to see or hear something motivated by “hostility towards religion, race, sexuality or transgender identity” — what are known in hate-crime legislation as “protected characteristics”. As with the equally contentious hate crimes, evidence of hate is not required; the only rationale is one of perception. Anything that the victim — or indeed anyone else — perceives as being motivated by “hate” means the police have to record it as a non-crime hate incident. According to the College of Policing guidelines “[if] the victim or any other person perceives that the incident was motivated wholly or partially by hostility, it should be recorded and flagged as a non-crime hate incident.”

A victim need not even be present. When in 2019 Harry Miller (pictured) posted a limerick on social media mocking transgenderism’s claim that you can change sex by mere self-declaration, he received a visit from the police. He was recorded as committing a non-crime hate incident and told by the police that he needed to “check his thinking”. The case ended up in the courts, where Miller won a ruling that the police had acted unlawfully.

Yet such incidents don’t just target ordinary citizens. In 2017, Amber Rudd delivered a speech about immigration at Oxford University. As Home Secretary, part of her job was to discuss politically divisive topics, such as immigration. An Oxford professor took umbrage at her remarks and reported it as a hate incident. Unbelievably the police agreed and it was recorded.

Although not legally a crime — no fines are issued nor will you be imprisoned — those accused of a non-crime hate incident, and who have it recorded, can still face serious repercussions. Anything that was recorded is stored on a crime database for six years. As they show up on a DBS check, employers will have access to this — potentially impacting that person’s future career prospects.

Since the guidance was introduced in 2014, 120,000 non-crime hate incidents have been recorded by police forces in England and Wales — 2,000 of which were recorded against children under 17.

We already have laws effectively making it illegal to make offensive remarks. The passing of hate-crime legislation was borne out of reaction to the Macpherson Report — brought in with the best of intentions after the murder of Stephen Lawrence. But non-crime hate incidents are not on the statute books. They are not laws, but guidance — a product of an unelected quango in the shape of the College of Policing. In the age of identity politics the police want to be seen to be doing something. We have ourselves another example of perception — except that this time it’s coming from those entrusted to protect us.

While the police ostensibly exist to protect the public, they are themselves weaponising hate-crime legislation and using it against the public when they feel offended. One case involved a teenager from North Wales being charged with a transphobic hate crime after he yelled “Is it a boy or a girl?” at an officer. While prosecutions for hate crimes against the public appear to be falling, the percentage of cases involving the police as victims appears to be rising. As Melanie Newman notes in The Critic, police were the victims in 53 per cent of all hate-crimes charged in North Yorkshire last year.

Whether a crime or a non-crime incident, when you provide certain groups more legal protection than others, we inadvertently put an end to the concept of equality under the law. All hate-crime legislation is an example of the law of unintended consequences — it  protects some, while it punishes and criminalises others. Rather than treating the victim as an individual, people are reduced to “immutable characteristics”  such as skin colour or sexuality. Collectivised justice based on perception is not justice — it is social justice masquerading as the law.