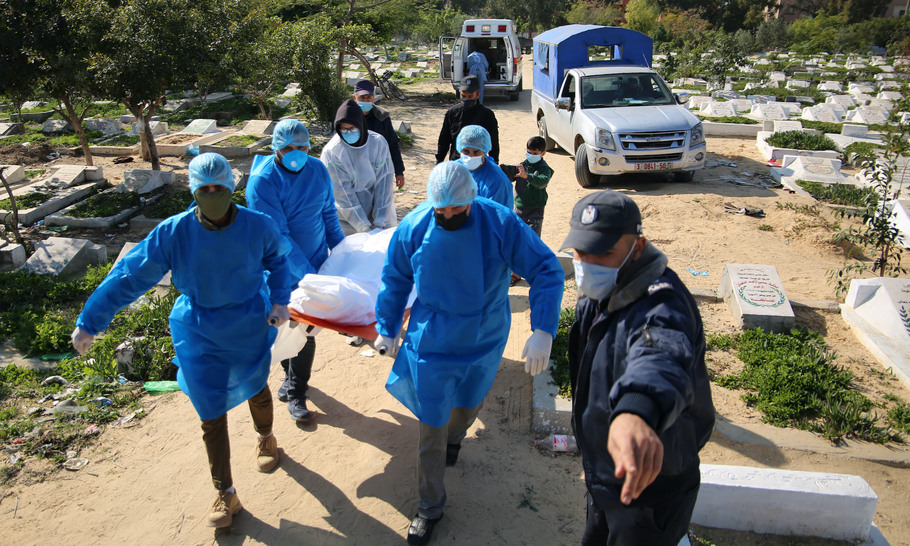 We are all equal before the virus. But when it comes to the vaccine some are more equal than others. Nowhere more so than the Middle East where the politics of the pandemic have become entangled in those of the region. Unsurprisingly ordinary Palestinians are among the losers.

The story so far: Israel is rolling out the Pfizer vaccine in world-record time. Batches are being distributed to Jewish settlements in the West Bank, but not to the 5 million or so Palestinians under Israeli military occupation there and in Gaza.

The result? Russia has stepped in with its Sputnik V jab, seizing a golden opportunity to burnish its image in the region at a time when the West’s influence is at an all-time low.

It is not clear quite how this came about. But the context is instructive. The Palestinian National Authority (PNA) has responsibility for healthcare in the occupied territories. In reality Palestinian autonomy, cowed and threadbare, is little more than fig-leaf for quasi-direct rule from Jerusalem.

Nothing gets done or moves in or out of the West Bank and Gaza without Israel’s say-so.

Some reports suggest that the PNA did not ask Israel for the vaccine, turning to Moscow instead to make a political point. Amnesty International, on the other hand, puts it down to “the institutionalised discrimination that defines the Israeli government’s policy towards Palestinians.”

Israel’s Health Minister, Yuli Edelstein, told Andrew Marr on Sunday his government felt it had no legal obligation to provide the vaccine to Palestinians.

Whichever it is, the sense that ordinary Palestinians live in a land where one people is privileged over another is inescapable.

If you were looking for an analogy for how the Middle East peace process is changing shape, who are the winners and losers, you’d be hard pushed to find a better one than the vaccine saga.

Israel, all-powerful; Trump-led peace moves that scorn the Palestinians; the Arab world, indifferent; Russia, on the make; a corrupt and inept Palestinian leadership. Amid all this the people of Palestine fade into insignificance, oppressed by the occupying power, ill-served by their leaders and all-but forgotten by a world otherwise preoccupied.

The prospects of relief for the Palestinians, let alone an even-handed political solution, look bleak. It will certainly not be a priority for President Joe Biden.

Donald Trump, the outgoing US president, has been credited with breaking the Middle East stalemate by brokering alliances, unthinkable even a decade ago, between Israel and the Islamic Gulf states including Saudi Arabia. It certainly represents a pivotal moment for the region and a coup for Israel.

But is this a breakthrough with legs? Will It render the wider Middle East, a historically conflicted region caught in an endless spiral of turmoil, more stable? Might it lead, in time, to a settlement of the Palestinian question?

Or was this just low-hanging fruit spotted by a smart real estate developer and his team bringing together willing buyer and seller, sweetened with the promise of American money and weapons?

It’s worth painting a broad-brush picture of where this began and where we are now before we look at where it might go next.

The recent Palestinian story can be divided, roughly speaking, into two chapters one on either side of the fateful 1993/95 Oslo accords between Israel and the Palestinians.

Before Oslo, the Palestinian issue was, at least in the rhetoric of Arab politics, central to the Middle East conflict.  No Palestinian state no wider peace. The two were inseparable. The Palestinians became the totem of Arab nationalism.

Israel and the Palestinians were born out of conflict and survive in conflict, like twins forever fighting for preferment on their narrow strip of land.

After the Jewish state was created in 1948 some 725,000 Palestinians were expelled from their lands by the new settlers, a vast, shifting and increasingly desperate refugee population that spilled across the Middle East.

I recall Anwar Sadat, the late president of Egypt, saying to a small gathering I was at in Cairo shortly after the 1973 Yom Kippur war: “The Palestinians are our cause”. He was not the first Arab leader, nor will he be the last, to renege on this pledge. He travelled to Jerusalem shortly after and later made peace with Israel. He paid for his audacity with his life, assassinated by Islamic fundamentalists in 1981.

After Oslo, a precarious Palestinian position became desperate. Oslo is seen, especially by younger Palestinians, as a sell-out of their cause abetted by their own side.

The accords were heralded as a process towards Palestinians self-determination.  They led instead to the annexation by Israel of part of the West Bank, sealed off by a 700km wall, the establishment of illegal settlements, two bloody uprisings and an ongoing war of attrition between the Jewish state and Hamas-led Gaza.

Edward Said, the Palestinian philosopher, wrote prophetically that Oslo II, signed by Yassir Arafat and Yitzhak Rabin, represented the end of “idealism and vision” crushing the dream of a Palestinian homeland.

The hard truth is that no Israeli leader – not even Rabin who also paid with his life for trying to broker peace – has ever really been serious about trading land for peace. A withdrawal, mandated by UN resolution 242 to Israel’s pre-1967 borders, has never been on the cards. That moment is gone, if it ever existed.

Israel’s overriding (and understandable) concern has been and always will be security and its continued survival. The deals with the UAE, Bahrain and Saudi Arabia are first and foremost about that. The Palestinians are an irritant to be contained.

Dr Nadia Naser-Najjab a research fellow in Palestine Studies at the University of Exeter, puts it like this: “Our illusions were shattered by Oslo. It was the moment the Palestinian leadership went from a policy of hope to one of survival. We lost unity and the leadership lost touch with its people. Instead, they built an illusory government with illusory authority that was entirely at the mercy of the occupiers.”

Like many of her contemporaries, Dr Naser-Najjab sees little hope for a two-state solution and even less hope for a one-state one.

Morale of Palestinians in the occupied territories is at rock bottom. A younger generation in the West Bank and Gaza born into occupation, uprising, economic struggle and humiliation has been slowly drained of hope and with it the will to resist.

Nassim, a friend who lives in the West Bank, told me: “There was a time when I dreamt of Jerusalem. Now what I dream of is a steady job to feed my family.” People, he added, still believed in the resistance but are no longer willing to fight for it.

This is a hugely significant change in mood with profound political implications.

His friend Farid, who lives in Gaza, told me: “People are preoccupied with their daily lives. Making ends meet. Our country has been all but destroyed. We cannot move in or out. I need an operation. I have to go to Israel or Europe for that. But I need both an Israeli permit to leave my country and one from the Palestinian Authority. I am a prisoner.”

Meanwhile the regional landscape has changed out of all recognition. The old certainties are gone. The Palestinians are the least of people’s worries now.

Libya, Iraq, Syria and Lebanon have imploded. Saudi Arabia and the Sunni Gulf states are reinventing themselves as new mercantile powers and centres of a mixed culture that blends Arab conservatism with Western free enterprise.

In a profoundly conservative, male-dominated culture this leap of imagination could prove a mixed blessing, open to a fundamentalist backlash. There has already been one Arab spring. Another cannot be excluded.

The Gulf has, in effect, broken away from the rest of the Middle East to form its own bubble. Arab unity, such as it was, as an impulse for Palestinian statehood has been shattered.

Overshadowing all this is Iran and the struggle for influence between Shia and Sunni, the two great orthodoxies of Islam. We are witnessing a tectonic shift of alliances, skilfully encouraged by the departing US administration: the Sunni powers of the Gulf forging alliances with the nuclear state of Israel to guard against a Shia megalith with nuclear ambitions of its own.

This emerging new alignment in the strategically-important, oil-bearing Middle East may prove a basis for stability. Or it may not. Treaties based largely on fear of a common enemy and fleeting economic interests are by definition mercenary and therefore fragile.

In his Bahrain press conference Jared Kushner, the great deal-maker’s son-in-law, urged the Palestinians to “divorce themselves from all of the history” and stop being “hysterical and stupid.” If “everyone stopped doing terrorism” he declared the deals he had helped negotiate would prove a boon for Palestine. It would thrive, becoming a great tourist destination.

There speaks a real-estate developer, born with a silver spoon in his mouth who never had his land, his home or his family torn from him. Kushner, a Jew, of all people, should know that history matters.

Ordinary Palestinians are in desperate straits with little power to do much about it. Youth unemployment is 40 per cent. Some 80 per cent of Gazans live in poverty. Infant mortality is 13 per 1000 against 3.3  in Israel. Only around 40 per cent of Palestinian children attend school. According to the Lancet, life expectancy of Israeli men ranks ninth worldwide. Palestinians rank 86th.

It’s now up to President Biden to get a fresh dialogue going. Conditions on the ground suggest the door is fractionally ajar. He won’t get far with the present Israeli government or the current Palestinian leadership. But he won’t get anywhere without being even-handed and conferring respect on the Palestinian people.

The bigger, moral question for the rest of us is this: if this is a real moment to be seized, who will stand up for the Palestinian people? Or are we content for them to remain victims of other people’s interests, including our own, forever?