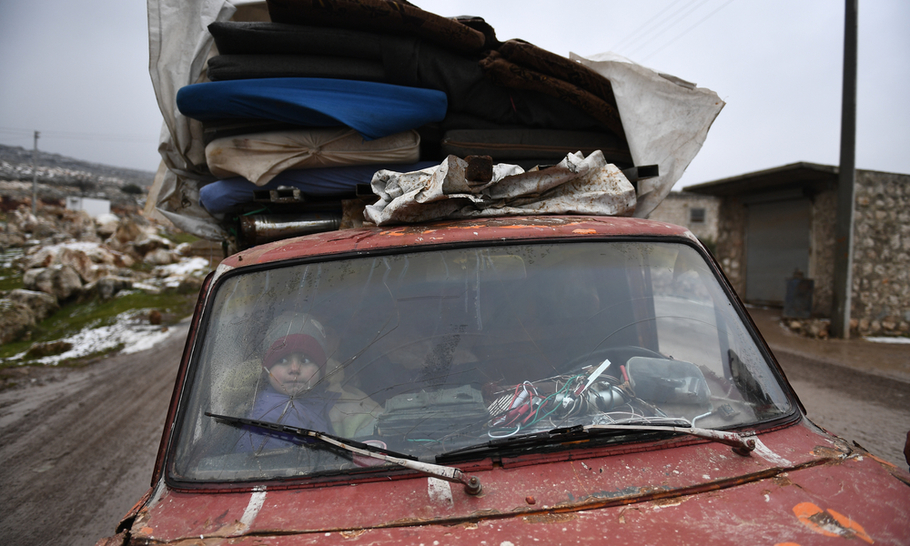 “Viewers may find some images distressing”. Whether Idlib, Yemen, Afghanistan or Libya, journalists will probably have risked their lives to film what follows. Why forewarn us that we may be distressed by reports of terrible human suffering? No such warning is given to tell us that an episode of Love Island may be depressing. Or a clip of the Johnson Cabinet laughable. Must we always be protected from distress?

Perhaps our patrician TV protectors mean “viewers ought to be distressed by the following images, but we understand you will be getting up to make tea, or may even switch channels”.

The horror of war is brought into our sitting rooms with stunning immediacy, often via mobile phones in the shaking hands of the victims themselves — and so should be more influential. Apparently not so. The Battle of Solferino in the Crimean War (1859) left 23,000 dying or wounded untended on the battlefield. Henri Dunant, a Swiss businessman and activist, saw the pain and carnage and was duly distressed. Out of his distress came the Red Cross and, in the 1860s, the first Geneva Conventions limiting the barbarity of war. Recent images from Idlib Province in Syria and Yemen result in no such comparable reaction.

Professional foreign correspondents struggle to engage us, because you can’t imagine refugees fleeing in their millions, nations where most of the population are malnourished or starving to death in a war. So they focus on particular families or individuals. We watch towns bombed to rubble around them while snipers and drones target them as they flee. Yet our fleeting empathy leads nowhere.

The sheer numbers of refugees are unimaginable. There are 3.66 million Syrian refugees now in Turkey, a third in camps near the border. There are 1.8 million in Jordan. The 1.5 million Syrians who fled to Lebanon live among a Lebanese population of only 5.9 million. Hundreds of thousands of children rely on state and NGO attempts to provide education. Caritas Lebanon, for example, provides after-school tuition for both Lebanese children at risk of dropping out of the overwhelmed state schools and for Syrian refugees.

Since Assad’s December Idlib offensive, some 900,000 people have fled north towards the sealed Turkish border. Besides the external agencies trying to meet this prodigious humanitarian challenge, the resilience and coping mechanisms of local actors are extraordinary. But humanitarian efforts are fast being overwhelmed.

And yet Syria and Yemen remain distant countries with little in common with the UK. Yemen is a semi-desert and desert land, desperately poor before the Saudis and Houthis made it a war zone. Over three-quarters of the country’s vital food imports pass through one contested port, Hodeidah, alongside arms for the Houthi rebels whom the Saudis, and United Arab Emirates (UAE), hope to interdict and defeat.

80 per cent of the population face starvation. Unicef is struggling to get food aid into the country, despite increasing obstacles erected by both sides, and the UN has warned of “the world’s worst humanitarian disaster”.

My memory of the people and the land is still vivid. As a visiting CEO of a development agency, I spent time in a remote village, high in the beautiful Raymah mountains of Yemen, where we were training midwives. These mountains may be unique; the higher you climb the noisier it gets. The poverty is as striking as the beauty.

You meet shepherds herding their flocks, climbing at a punishing rate, or skipping downwards irrespective of age, men and donkeys carrying impossible loads and incongruous items, a television set, a Kalashnikov, two big status symbols. You mount via uneven steps, passing narrow terraces where food crops and qat are grown. At the top there is the buzz of human voices: houses, villages, dirt roads, beaten-up cars. You don’t climb mountains in Yemen seeking solitude.

Has the inaccessibility of the Raymah mountains protected people from the worst ravages of war? I don’t know. Idlib in Syria, the final sanctuary for hundreds of thousands of Syrians fleeing war, certainly hasn’t. In Idlib refugees are the targets of the Assad regime’s barbarism, supported by Russia. The evidence of the deliberate targeting of hospitals, ambulances and schools, innocent civilians or “white helmets” tending the wounded, is overwhelming. Barrel bombs fall on markets and areas of high population density. As drones pick off individuals, a new high-tech chapter in man’s inhumanity has opened up. We have come a long way from Solferino where soldiers bore the brunt of war. Now it is the civilian populations whose agony is reported.

The Geneva Conventions built on a tradition of ethics. Christianity and Islam both developed a theory of “just war” from a shared set of medieval principles. Many pages in Sharia Law dwell on what is not permissible in jihad, most notably the killing of innocents and non-combatants. Similar constraints on targeting, inherited from the Christian past, are part of an ethical code taught and generally implemented by British Forces. But, lest we claim some inherent sense of superiority, last week was the 75th anniversary of the indiscriminate, and unnecessary, bombing of Dresden, in which an estimated 24,000 Germans died.

A concerted international effort is needed to re-establish the laws of war, rebuild compliance with international conventions, and end complicity with their systematic undermining. It will be no easy matter. Diplomatic or commercial reasons for ignoring the increasing destruction of international order can always be found. It is time we — and complicit heads of state — began to “find some images distressing” and acted decisively upon our distress. As the head of the International Rescue Committee, David Miliband, said in Davos: “Welcome to the Age of Impunity”.