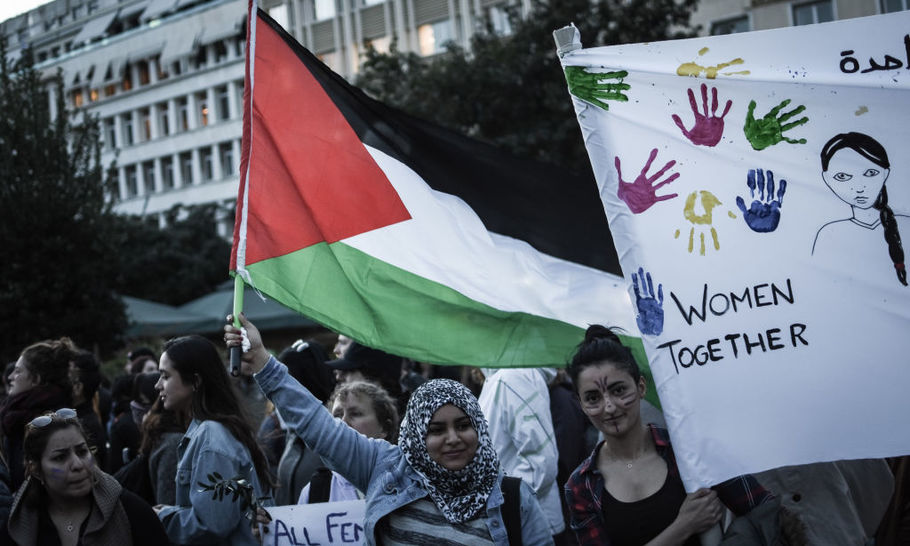 The internet is a place to bring people together, and also to drive a wedge between them. The global feminist movement is no exception to this. In the wake of the murder of the Palestinian makeup artist, Israa Ghareeb, by her family in September 2019, women mobilised online, sparking protests across the West Bank, Haifa, Lebanon and Berlin.

But just as feminists come together online so do their opponents. From Twitter to mainstream media, Islamist affiliates and allies of groups such as Hizb ut-Tahrir are relentlessly trying to silence and isolate women who speak out.

In Palestine, where Hizb ut-Tahrir was founded, women report violent threats, abuse, and allegations of being part of a Western conspiracy. Linda Jarayseh, outreach manager for the Mehwar Centre in Bethlehem, a safe house for women and children fleeing domestic violence, is one of many examples. She has been a vociferous opponent of forced and early marriage in Palestine. In regards to this, a member of the prescribed global Islamist organisation Hizb ut-Tahrir claimed:

“Linda has an EU agenda which is clear through her teachings that women should not marry before 18. This is not what we believe. She is part of a Western conspiracy to impose evil Western ideals on our community.”

The opposition faced by female activists in the Middle East is similar to the experiences of female Muslim activists in the UK. Islamists consistently aim to discredit and isolate activists by using conspiracy theories and attacks on the person’s “Muslimness”.

One of the most high-profile cases were the allegations against Nobel Prize laureate, Malala Yousafzai, which claimed she was a CIA agent. Female Muslim activists in the west are accused of having foresaken their Muslim roots and traditions, becoming the lap dogs of Western governments.

The opposition to female Muslim activism is most effective when it weaponises the grievances of many Muslims towards the West. Islamists excel in stoking Muslim resentment towards US, UK and to a lesser extent, French incursions in the Middle East and Asia.

They also play on the anxiety felt within Muslim communities in western countries whose members are trying to balance cultural heritage and western values.

A focus group of female Palestinian women’s rights activists in Hebron analysed the abuse faced by the UK activist Mina Topia. On a BBC panel in 2014, Topia said that she didn’t advocate an Islamic caliphate, but would prefer a secular democracy in which people were not discriminated over gender, sexuality, religion or ethnicity. In response, Dilly Hussain, deputy editor of the Islamist news website 5Pillars wrote: “You fat cow, that’s reinterpreting orthodox Islam for right-wing neocons, now grab a bottle of wine and do one.”

In comparing the abuse faced by female activists, the group found coordination between the Islamist opponents of Muslim feminists — not surprising when you see how closely the opposition are linked. 5Pillars, for example, openly supports Hizb ut-Tahrir, which has issued death threats against female activists in Palestine.

One article on 5Pillars states: “It is not Hizb ut-Tahrir that spreads terror and hate, causing fear and division; rather it is the government policy of muscular liberalism, those in the media who spread it, and ultimately the failure of secularism itself.”

Labelling an activist “secularist” has become another way to discredit the work of progressive Muslims. Tehmina Kazi, a human rights activist and an advocate for secular Muslims, has said that her secularist ideals are being turned against her: “Being secularist is not at odds with the Islamic faith, yet again and again it is used as a brand against activists to isolate them from the Islamist ‘clique.’”

In discussing Hizb ut-Tahrir’s authority over the community in Hebron, the Palestinian female focus group said that most Palestinians find them silly and ignore them. They were shocked to hear that Islamist ideologies in the UK are listened to and that people like Hussain appear on national TV as spokespersons for the Muslim community. They were also surprised to learn that politicians, including Jeremy Corbyn, appear at, or even organise events with them. One member of the group remarked: “We struggle with this old illiberal thinking here, especially in Hebron, but how and why would it exist in the UK? It’s very hard to believe and is so shocking.”

It is not too difficult to understand: the post-colonial guilt felt on the British left has led many to support those who claim to be the “authentic” minority voice. This often means that progressive Muslims, who subscribe to democratic and leftist ideals of emancipation and social justice, are pushed out in favour of more conservative Muslim voices.

Activists must be careful to identify the methods and the people who oppose them. Islamists use conspiratorial thinking, abusive language, threats and isolating tactics to discredit and intimidate progressive Muslim women. We in the West must be careful not to align ourselves with ultra-conservative voices that seek to undermine progressive women. Those who do are part of the problem.