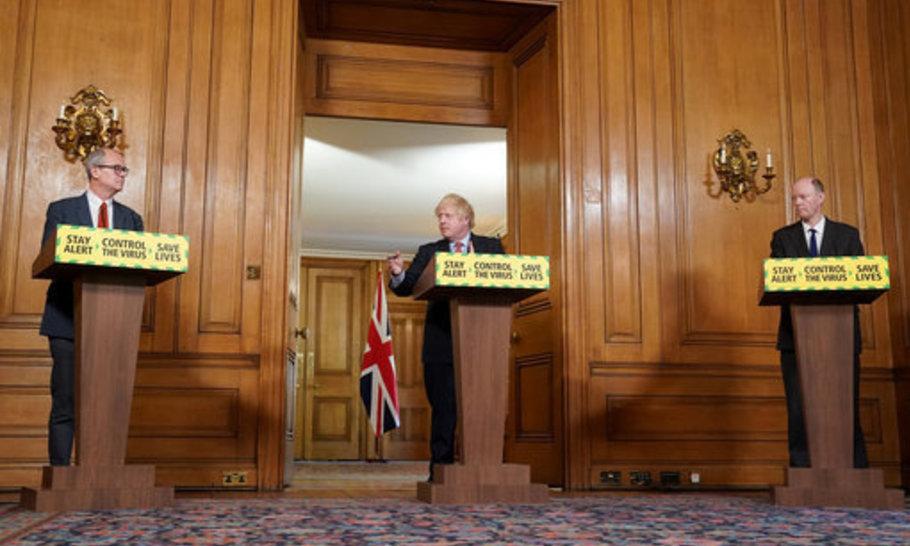 I have been pretty critical of the media throughout this crisis, and certainly most of the papers have lost the plot if they think the miniscule but still risky easing announced yesterday was as significant as the UK finally topping the deaths per million table, or the chief medical and scientific officers being gagged.

But put that to one side for now. In recent days, the media questioning on the Johnson/Cummings scandal has been far better and more rigorous than on the previous Covid scandals, whether the early indifference and exceptionalism, the handshake boasts, Cheltenham going ahead, PPE, tests, care homes etc.

However, as someone who pressed early on for a daily government briefing, I now think they should end, unless the format changes substantially — and it is the media who should pull the plug.

I have no time whatever for Donald Trump. But at least he has answered media questioning face to face during the crisis. Trump, President Macron in France, Chancellor Merkel in Germany, Governor Andrew Cuomo in New York, have all done regular briefings, with socially-distanced media present. To that list, add Dominic Cummings, the only UK government figure to have physically shared the same space with a group of journalists since the lockdown began.

Yesterday, Johnson did the briefing in the hope — justified given the craven state of most of our national papers — that his announcement that we could invite a couple of people to the back garden would get Cummings, and our appalling death rates, off the front pages.

Even as he said that “Test 2” — a sustainably falling death rate — was met, the graph on which he was relying showed not just two big blue bars recording the actual deaths over the last two days — 412 and 377 — but an upward tick on the yellow line they said was falling. This is pure Trumpism — lie even as you present the facts about which you are lying. No wonder the medical and scientific officers alongside him couldn’t bring themselves to look at him.

The muting of journalists trying to ask follow up questions was less Trump, more Putin. And the gagging of Chris Whitty and Patrick Vallance was more Stalin than Putin.

I recognise that journalists want to have as much access to decision makers and policy makers as they can. But the format is now being used deliberately by the government to thwart proper questioning and scrutiny.

It would matter less if Parliament were sitting, but it is not and we saw once more during his Liaison Committee hearing this week that Johnson will do everything to evade proper Parliamentary scrutiny too. When asked by chairman Bernard Jenkin to commit to a further appearance before the end of the summer, he dodged it. I am certain that any of the five living former PMs – Major, Blair, Brown, Cameron and May — would have had a one-word answer to the request: “yes”.

Pippa Crerar, the current chair of the lobby group of Westminster journalists, broke the Cummings story and as a former Mirror man, I have enjoyed seeing her paper leading the way on a big political story.

But I really think she needs to put on her chair of the lobby hat today and have a Zoom call with her colleagues. Were I still a political editor, I would argue they should agree to boycott the briefings now, and the broadcasters will not cover them live, unless they are allowed to be physically present and, within a reasonable time limit, say one hour, there should be no limit on the number of questions asked.

They may worry this is what the government wants, for they will then just put out videos and tweets and photos and try to set the agenda that way. And yes, they will, and blame the media for the breakdown. But the media can see the Number 10 output as just one source, and test what they say accordingly.

Meanwhile, there needs to be more proper old-fashioned journalism. If the key people don’t want to be questioned — Rishi Sunak, Matt Hancock, Michael Gove, Priti Patel, Gavin Williamson, Dominic Raab — then journalists need to wear out the shoe leather. Think Michael Crick when he used to cover by-elections, following politicians with his camera crew and getting them to answer questions, or look dodgy avoiding them.

Of course it is harder in these times of social distancing, but if answers are not being properly answered at the briefings, then the journalists need to find the key people where they can.

It’s harder still with Johnson, of course, hiding behind the major protection systems around Downing Street and Chequers. But given how low profile he is anyway, other than when fighting for Dominic Cummings, that won’t make much difference.

And any journalist worth his or her salt will not give up on trying to get Vallance and Whitty, and every other scientific and medical expert fielded by the government, to answer the questions Johnson barred them from asking yesterday.

Meanwhile, talking of determined journalists who never give up harassing politicians for the truth, check out Northern Ireland veteran Eamonn Mallie’s podcast interview with Gabriel Scally, the Irish epidemiologist. Scally, who works in Bristol, said of course he got the public rage about Cummings, but for heaven’s sake, why no such rage about more than sixty thousand deaths?

I for one am in a rage about both; and they are linked.