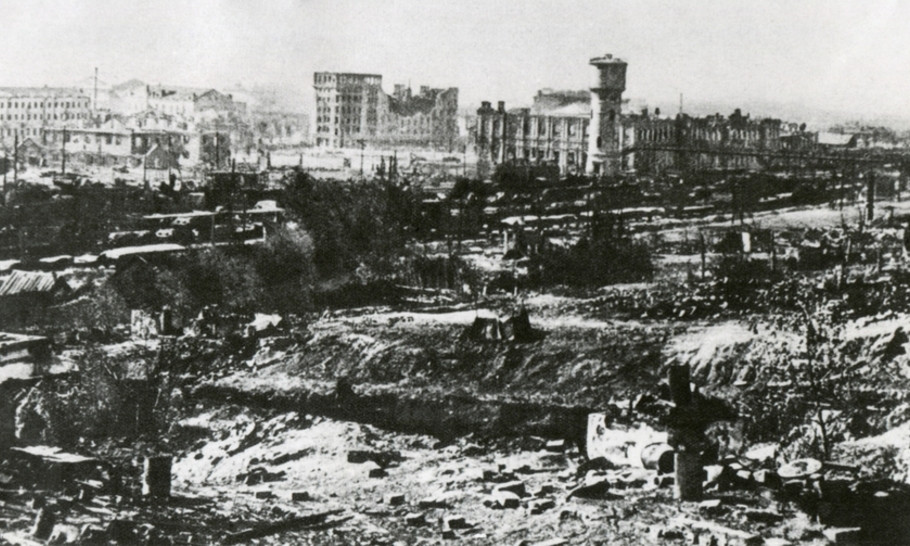 When the Daily Mail and the Guardian run the same headline, you know you’re on to something. Last week the editors of both newspapers drew a comparison between the developing situation around the Ukrainian capital and the seminal battle fought through the winter of 1942/3 at Stalingrad. Is this an appropriate comparison, and, if so, what lessons can inform both sides fighting in Ukraine?

At one level, the comparison is almost grotesque. Stalingrad was the turning point of the largest conflict in history, the death struggle of competing world systems and a personal denouement for two of the most pathologically distorted egos available to history in Adolf Hitler and Josef Stalin. The only remote parallel in historical scale is the personality of Vladimir Putin, but even that enigma is well short of the Napoleonic weight to bear comparison with the central protagonists of the Second World War.

In many ways, the German army in the summer and autumn of 1942 was at the height of its incomparable powers. Case Blau, the German plan for a strategic offensive in Southern Russia, started in June and enjoyed the same intoxicating success that had characterised the battle for France or the initial invasion of the Soviet Union as it swept towards the oilfields of the Soviet Caucasus. Any resemblance between that as a military instrument and the Russian army currently blundering its way towards Kyiv is purely coincidental.

The comparison is closer, though, between the defenders of Stalingrad and those currently building their positions in Kyiv. Both were and are animated by a passionate loathing for an invading army given to atrocity, an indefatigable patriotism forged by external aggression and a rare civil/military/political unity. Whether 21st century Ukrainians have the same barely credible endurance and fortitude as the men and women defending Stalingrad remains to be seen.

Even the insatiable strategic ambition of Hitler was limited by Russian geography. Lebensraum — the Nazi concept of expanded living space — was defined in the East by the line Archangel/Astrakhan. And, while Stalingrad was only a sub-clause of Case Blau and never intended for physical reduction, its occupation did serve the strategic purpose of cutting the Soviet Union in two by dominating the arterial Volga river at the planned limit of German exploitation. In turn, this would cut European Russia off from its oil supplies and the war matériel being supplied by Britain and America via Iran.

We don’t yet know the limit of Putin’s strategic ambition. In the absence of that knowledge, we are bound to assume that it is the existing international borders of Ukraine. In which case, taking Kyiv is of emblematic significance rather than serving a physically strategic purpose as Stalingrad did. If, however, the Russian judgement is that a functioning Zelensky-led government is the Ukrainian centre of gravity, then its neutralisation does serve a strategic purpose and could be the prelude to negotiation from a position of Russian strength.

Putin might be led to this view by the patent inadequacy, in terms of both numbers and quality, of Russian forces to occupy the largest country in Europe (apart from Russia itself) and an ill-disposed population. In sum, there may be a loose comparison in strategic terms, but, either way, understanding the limits of Putin’s ambition is the most critical intelligence requirement facing the appropriate western agencies in the current conflict. Around that, all else turns.

At the operational level, there seems little to justify comparison. The German Sixth Army fought its way into Stalingrad though the late autumn of 1942 and the Russian winter subsequently became a decisive weapon in its own right. It may be that the Russian invasion of Ukraine was timed to coincide with the more benign conditions of spring and summer to consolidate its operations. Kyiv is not yet surrounded by Russian forces, though that will be a necessary pre-condition if the strategic aim is the neutralisation of Ukrainian governance.

During the German assault, Stalingrad was never surrounded. With the 1,300-meter-wide Volga at its back, the 62nd Army under General Vasily Chuikov fought within a shrinking perimeter but were always sustained by supplies sent across the river at night and supported by medium and heavy artillery firing from the eastern bank. None of that is likely to be available to the defenders of Kyiv and they will be forced to fight with what they have.

But at the level of the campaign there is a fundamental difference between Kyiv and Stalingrad. The eponymously named city became the total focus of attacking German forces and was seen by Hitler, if not his generals, as symbolic of his epochal struggle with Stalin. The Russians, by contrast, maintained a wider view, and, with the utter ruthlessness of which Stalin and Zhukov were capable, Chuikov’s army was only ever reinforced to a subsistence level as it became the bait in an operational level trap.

While the German military imagination was confined to the Russian enclave clinging to the western bank of the Volga, the Russians formed, trained and deployed armies to attack the Romanian held flanks of the Sixth Army and complete the encirclement and destruction of the largest formation in the German order of battle. The poignant truth is the battle for Kyiv cannot be the first phase in a decisive Ukrainian counter offensive; the asymmetry of military resource simply precludes that and any form of historical comparison is hideously inappropriate.

Finally, at the tactical level, the comparison does bear scrutiny because some things don’t change and the nature of urban warfare is one of them. Again, we cannot be sure of Russian intentions. It may be that the destruction of Mariupol by Russian indirect fire is intended both as an end in itself and also to convey the message that this is what awaits Kyiv if the Ukrainian government does not concede. Russian practice in Chechnya and Syria has been to rely almost solely on the percussive damage of artillery, rocket and air attack to intimidate defenders into surrender.

Beyond those who took part in the US Marine Corps clearance of Fallujah or the Kurdish assault on ISIS-held Mosul, experience of fighting house to house over extended urban terrain is outside the experience of any contemporary army. It is the most demanding, expensive and harrowing form of warfare within the conventional lexicon, but it’s what the Russian army must contemplate if their aim is to decapitate the Ukrainian government and kill its president. If Zelensky holds his nerve and stays put, there is no alternative and this is where comparisons with Stalingrad become profoundly instructive.

The first lesson is that it’s not the Russians who need to close with the Ukrainians, but the other way around. The most effective way to negate the overwhelming Russian advantage in firepower is to get as close to their assaulting infantry as possible and therefore place them within the danger area of their own supporting fire. Stripped of this habitual advantage, the battle then becomes terrifyingly intimate. The standard Russian fighting patrol in Stalingrad went for the short barrelled automatic weapons, grenades and even sharpened spades designed to prevail in this most elemental form of combat. The reported Russian recruitment of foreign fighters suggests they understand the implications of urban warfare and are building an expendable reserve of cannon fodder to spare the grief of Russian mothers.

The British army has been training Ukrainian snipers for some time and will have created a military capability that gained mythic status in Stalingrad. Few things hollow out the appetite for battle more than the detached, anonymous murder perpetrated by a competent sniper. Sniperism became a cult in the Soviet Union as soldiers like the Siberian rifleman Zaitsev achieved celebrity status for his 149 kills. Elsewhere in the Russian army, the most consistently brave and selfless element were the medical orderlies. Almost invariably female, they routinely recovered casualties by crawling out to the point of wounding and dragging the injured back to Russian lines. If this sounds at the least atavistic and perhaps inconceivable in the 21st century, it is exactly this reversion to primitivism that characterises the urban fight.

In the German army fighting in Stalingrad, the most revered soldiers were not the infantrymen or the panzer commanders but the humble assault engineers because in close quarter combat a satchel charge is more use than a rifle. At some point in any assault on Kyiv, the Russians will seek alternative means of engagement than standard infantry weapons in order to mitigate the exorbitant cost of urban battle. In Stalingrad, this took the form of short-range use of high explosive and flame weapons.

In different terrain but a similar form of combat, the Americans used exactly the same expedients in the cave systems of Iwo Jima and Okinawa. Beyond that, the Russians may be tempted to use chemical weapons. This need not involve the use of lethal agents; tear gas can be highly effective and just as asphyxiating in confined space. It will though create a degree of ambivalence that is the last thing required when escalation to weapons of mass destruction is a contingent danger.

Taken overall, the comparison between Kyiv and Stalingrad is tenuous, but becomes more appropriate the smaller the scale of battle examined. That’s a rather bloodless, academic conclusion and somewhat at odds with the baleful content of this article. This was a sobering piece to write and it will make for a tough read. It might, though, capture something of the grave times within which we live.