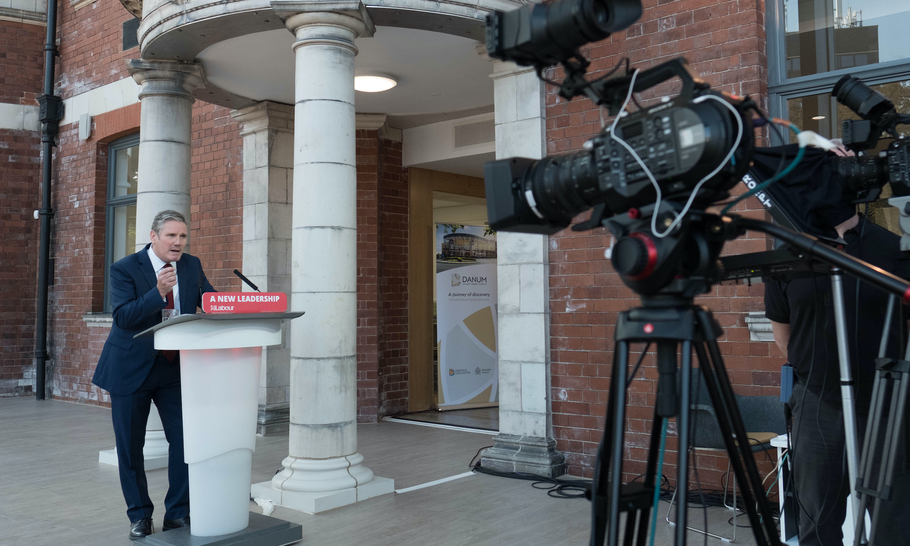 The good news for Labour is that it now leads the Conservatives for the first time since the general election; and it is doing especially well in the seats it has lost in the past decade. The bad news is that it still has a massive mountain to climb if it is to win the next general election outright.

Recent Opinium surveys give Labour further joy. Their fortnightly polls include data on the seats Labour has lost in the 2010 and subsequent elections. Many of them are “red wall” seats in Labour’s former industrial heartlands. All of them are seats that Labour needs to target if it is to win an outright majority. Opinium asks people not just how they would vote today, but how they voted last December. Comparing these figures allows us to work out the swing. The numbers for the lost-Labour seats are too small in any one poll to be reliable, so I have combined the figures from the last three Opinium surveys. This yields a sub-sample of more than 1,000 in these target seats.

The following table shows what has happened. Labour seems to be regaining a significant number of its traditional supporters in the seats it needs to win. 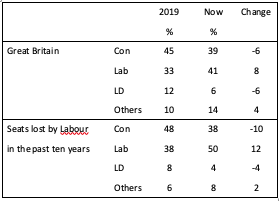 These figures suggest that the swing from Conservative to Labour is seven per cent in Britain as a whole, but 11 per cent in the seats Labour needs to win back. In a general election, that extra four per cent swing would cause the Conservatives to lose 40 more seats than on a uniform swing.

That’s plainly balm for Labour; but there is a fly in the ointment. Most of those extra gains are needed to redress a pro-Conservative bias in Britain’s electoral geography. Until 2010, that geography was kind to Labour. In 2005, Tony Blair’s party won an overall majority of 66 with just a three per cent lead in the popular vote. Five years later, the Tories’ lead was more than double that: seven per cent. But they fell short of an outright majority in Parliament. David Cameron had to agree a coalition with Nick Clegg’s Liberal Democrats to form a stable government.

Since then, Britain’s electoral geography has moved against Labour, mainly because it has been wiped out in Scotland. Suppose the two main parties won exactly the same number of votes at the next general election. According to calculations by John Curtice, published in the Hansard Society’s report on last year’s general election, the Tories would lose their majority but still have 23 more MPs than Labour, assuming an even swing throughout the country. Labour would need a lead in the popular vote of more than two per cent to become the largest party, and a lead of more than 12 per cent to win an outright majority.

However, if the swing at the next election in Labour’s target seats does turn out to be four points greater than the national average, then a lead of just over four per cent in the national share of the vote would be sufficient to give Labour 326 and a bare overall majority in the new House of Commons. Even so, Britain’s electoral geography would still be harsher for Labour than when it last won a general election fifteen years ago.

I should stress that these are simply numerical projections. In past elections, there has often been a difference in the swings in marginal seats versus safe seats; and tactical voting can help, too (though it didn’t last December). But a four-point difference would be unprecedented. Labour can hope for past records to be broken and, indeed, work for it; but the party would be unwise to rely on such a big gulf persisting between marginal and safe seats.

One other cautionary point needs to be made. Past Labour oppositions have achieved big polling leads, only to go on to lose when the next election came along. In the spring of 1990, when the poll tax was introduced, Labour was 22 per cent ahead of the Tories. Two years later John Major led his party to its fourth successive victory. Indeed the Conservatives set a new record, which still stands, for the largest number of votes won by any party at a general election.

To be sure, those were extraordinary times. Margaret Thatcher was deposed as Prime Minister in November 1990, and one of Major’s first acts on succeeding her was to ditch the poll tax. Oh, and Britain took part in the Gulf War to liberate Kuwait which, unlike the Iraq war of 2003, was a quick success. The larger point remains, however: voters can be fickle. If Boris Johnson continues to make a mess of the big things he must deal with, especially the Covid pandemic and life after Brexit, then he might be deposed. A calmer, more competent successor might well revive Conservative fortunes.

All in all, the recent polling news has been good for Labour – especially its recovery in the red wall seats it has lost. But the party needs to keep this in proportion. It has established a comforting base camp. The hard part of climbing the mountain lies ahead.