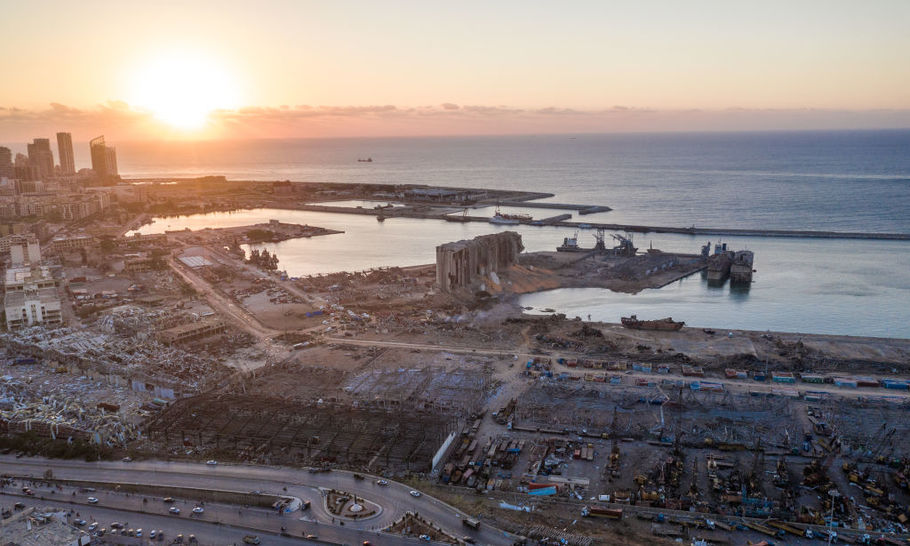 Facebook lit up after Tuesday’s monumental explosion with “I’m Safe” posts. One of them was a Lebanese relative of mine who teaches at Oxford and has a home in Beirut. He was born at the height of the civil war. He and his wife and two young children were at home some 2km from the blast. The house shook to its foundations. His windows shattered. A friend just down the hill from the Christian quarter of Achrafieh was thrown across the room of his apartment.

My cousin climbed onto his roof as we spoke: “I can see the port or what’s left of it. It’s gone. Vaporised. The damage is worse than anything I witnessed during the civil war.” One small mercy he said: a part of the country’s wheat reserves were being transferred between ships lying offshore. “That’s an immediate disaster avoided,” he said.

Yet again this small, enchanting sliver of land hemmed in by Israel and Syria and a crystalline Mediterranean Sea, a country so beautiful yet so tortured, has been pummelled. A city laid waste. A country wounded almost beyond endurance. Daniel Johnson posed the question yesterday of whether Lebanon is a failed state. It’s a good question. The answer lies not in its present but in its past.

The Lebanese writer Amin Maalouf, who still lives in Lebanon, said last year that he was “born safe and sound in the arms of a dying civilisation.” Lebanon was once a rich country endowed with people of great skill and culture. But he was overwhelmed by a “sadness from which I can no longer heal”. I suspect that many of us who have reported from Lebanon, or who have a personal connection with the country or both, as I do, feel the same way.

The time between the Palestinian insurgency in 1968 that triggered (but did not cause) the civil war that tore the country apart, now feels less like memories and more like scars. As I write this, I have to close my eyes to remember pre-war Lebanon. Beirut was always a city of dreams and drama — a city, as the author Nasri Attallah says “where nothing is constant. A city to be loved and hated a thousand times. Exhausting. Beautiful.”

Beirut is a city both cultured and vulgar, sublime and ugly, refined and debauched. Cultured and corrupt. It was rich. Playground to the royal families of the Gulf. It was a nest of intrigue beloved, among others, of Kim Philby.

Ajami, the best Lebanese restaurant in the world, exemplified the art of being a Beiruti. Amid its walls covered in fine blue mosaic you ate the best, the freshest Tabbouleh and rubbed shoulders with the beau monde. Like the rest of central Beirut it was blown to smithereens in the civil war.

Behind a carapace of corruption Lebanon was also stable. The Lebanese currency used to be as solid as the US dollar and was backed by a vast hoard of gold managed by arguably the most conservative central bank in the region. Beirut’s very cosmopolitan nature was the cause for both its rise and its downfall. It became a trading hub for the Middle East. Hong Kong and Singapore served as models. People came and people were allowed to meddle.

It was intended by its clannish leaders to be neutral territory where you came to have fun and make deals political and commercial, above-board and underhand. It was described then, not entirely without justification, as the Switzerland of the Middle East.

Lebanon’s disintegration lies in the manner of its birth. Lebanon — or Greater Lebanon as it was then — was conjured up out of the five provinces handed over to the French by the League of Nations after World War I. (Palestine went to Britain.) It was a melting pot of faiths, clans and ethnic groups thrown together by armchair strategists.

France saw Lebanon as a Christian (and Francophone) bulwark against a largely Muslim region and it encouraged the rise of a Maronite Christian minority. Lebanese Christians do not by and large see themselves as Arabs. Their culture, and their families, have a distinctly European ethos with a touch of the Levant and they saw Israel as a natural ally against a chaotic Arab hinterland.

The constitution was skewed heavily in their favour, not unlike Northern Ireland with its Protestant bias. Resentment rose as a privileged minority, previously a majority, fought a rearguard action to preserve their privileges. But unlike Northern Ireland, which was able to draw on the support of the UK and the Republic to overcome its sectarian differences and achieve peace, Lebanon is a lamb among wolves.

Of all the countries in the region, it is perhaps the least cohesive and most fissiparous. It has always been a fracture waiting to happen. Lebanon’s history of insurgency, invasion, interference and savage civil war is long and, with hindsight, depressingly inevitable. From the beginning, a restless and resentful Arabism was straining to break out and challenge what historian Kamal Salibi calls “Lebanism”.

Palestinians driven out of their homeland after the creation of Israel settled mostly in Jordan and Lebanon. From their camps in southern Lebanon and the outskirts of Beirut they waged war against Israel. Israel responded by invading Lebanon with the help of the Maronite Christian militias who were already at odds with the Palestinians. But they were also rising up to defend their communal interests.

In 1982 the Maronite militias massacred hundreds, possibly thousands of Palestinian men, women and children in plain sight of Israeli forces at the Sabra and Shatila refugee camps. Wounds like these, and the more recent invasion by Syria and the support offered by an irredentist Iran to Hezbollah, do not heal. They fester, spreading the infection of sectarian hatred.

It is often said that the Lebanese civil war from 1975-1990 was caused by the presence of the Palestinians. This is a very partial explanation. The seeds of Lebanon’s implosion were sown when the country was created after the fall of the Ottoman Empire. It is fair to say that Lebanon’s leaders have been weak, clannish, grasping and opportunistic. Over the years they have made some bad choices. The country has been slowly disintegrating. But it now looks like it’s on the edge of an abyss.

The people of Lebanon, surely among the most resilient in history, will survive. But putting Lebanon back together again will require a monumental effort both by its leaders and the international community. As with much of the Middle East, creating a country is one thing. Creating a nation is another.