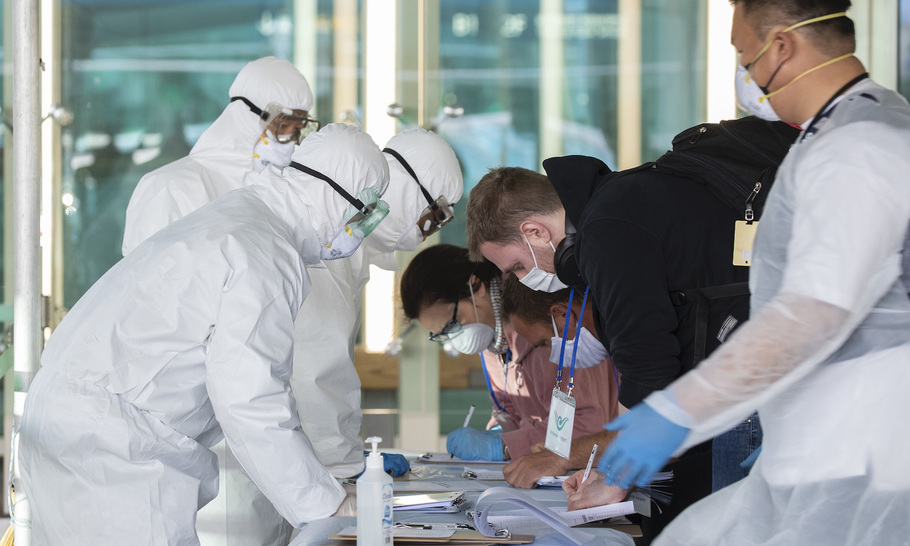 27 March 2020 - South Korean passengers from Europe and US are tested. Lee Young-ho/Sipa USA)

In the last couple of days, I’ve found myself starting to think that perhaps there is some light at the end of this frightening tunnel. Whether this is true or not, it leads me to wonder what lessons can be learned that might improve society and the functioning of our economic model.

There is some evidence that Italy and Spain may have reached — or at least are close to — the peak of the curve. If so, in the coming days, it will demonstrate to others that not only can Asian countries get to grips with Covid-19, but so can western democracies. This offers a path for the rest of us, perhaps.

The last few weeks demonstrate that there is an interventionist role for governments in society, whether it be in health, finance or any walk of life. Some of those changes, such as social distancing, are temporary, but perhaps others could prove more durable.

Linked to this, governments of all sorts now realise that there is a connection between the quality of our health system and our economic capability. When I was chief economist and head of research for Goldman Sachs, I oversaw the creation of an index of global economic sustainability. The top 10 best performing countries on this index (with the highest Growth Environment Scores), included eight of the top 10 best performing countries in handling this Covid-19 crisis — in terms of deaths relative to population, so far. The top three on the index (not calculated I believe since 2014) were: Singapore, Hong Kong and South Korea, all of which have been exemplary in dealing with this pandemic.

This suggests that, once we are through this crisis, a number of larger countries — and perhaps their international advisers such as the IMF — will treat the quality of national health systems more importantly when assessing a country’s ability to deal with shocks.

In addition, it seems, more specifically, policymakers have been given a rather stark warning about other looming health disasters, especially antimicrobial resistance (AMR), of which antibiotic resistance lies at the heart. I chaired an independent review on this subject for the then-Prime Minister, David Cameron. It found that if we don’t solve the escalating AMR challenge, by 2050 we could have 10 million people dying globally each year due to infection and a lack of effective antibiotics. The accumulated cost could be as high as $100 trillion.

To prevent this, we recommended 29 interventions, which would require $42 billion worth of investment — peanuts compared to the costs of doing nothing. It seems likely that policymakers are going to treat this threat more seriously now.

In addition, as a clear consequence of the — hopefully, temporary — global economic collapse, our environment suddenly seems to be cleaner and fresher. In this regard, we have bought some time in the battle against climate change. And moreover, linked to the role governments are now playing, and have to play, surely, they can exert greater influence on fossil fuel extractors and intense users as we emerge from this crisis. The government can make it clear to industries that require support that state help is dependent on certain criteria.

Another inference that seems obvious, connected to this, is that the days of the excessive share buy back, and the extreme maximisation of profit, possibly at the expense of other goals, are over. It seems to me that an era of “optimisation” of a number of business goals is likely to be the mantra, including profits.

The Covid-19 emergency also has consequences for equality, in various forms, especially as it relates to income. Here in the UK, the government has offered its strongest fiscal support to the lower end of the income earning range group, and in a single swoop, has presided over the most dramatic step in narrowing income inequality for a long time. This comes on top of a period of strong initiatives to support higher levels of minimum earnings, and we will emerge later in 2020, into 2021 and beyond, with lower levels of income inequality.

A further thought relates to the geographical issue of rural versus urban life. As we all realise only too readily, Covid-19 has spread more easily in more tightly-packed cities — witness the spread in London, New York and other urban centres. More geographically remote places appear better protected. Coming on top of the Brexit shock in the UK and the Trump shock in the US, both of which were partially driven by voters outside the cities, perhaps more thought will now be given by policymakers to the quality and purpose of life outside our big metropolitan areas.