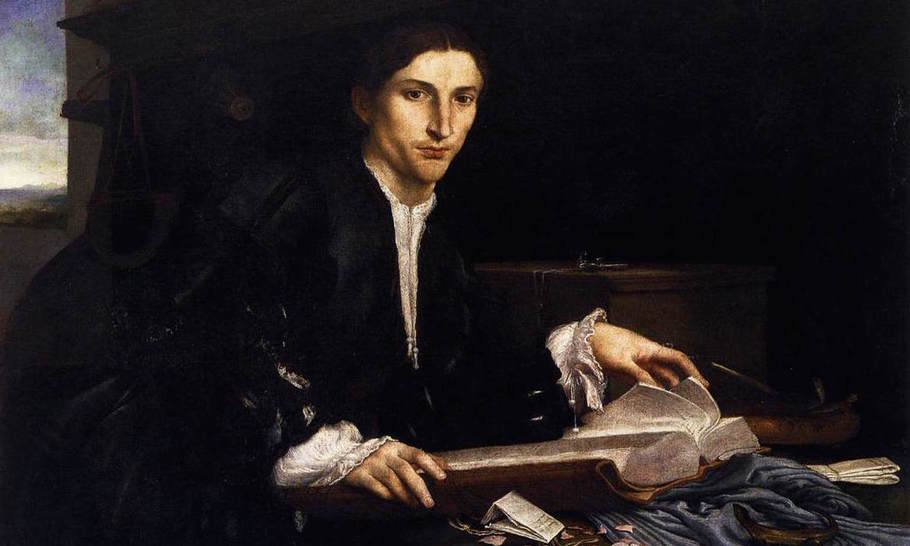 A man in his twenties stands at a table, his hands distractedly turning the pages of what appears to be a ledger, his eyes fixedly staring off into space. In the background lurk objects shrouded in shadow – a hunting horn, a lute, a cap – but more important is what lies in the corner of well-lit foreground: a blue shawl, rose-petals, folded letters, and a small, attentive lizard. The man, dressed predominantly in black, has no interest in either this patch of colour in front of him or the slender window-view of sunny landscape behind him. His face and hands are pale, clammy, hinting at illness and a reluctance or refusal to venture outdoors. But nothing is clear-cut so we are forced to sift the clues, gauge the mood, and form our own conclusions. Do the scattered petals and letters point to dashed hopes and thwarted love? Is the man overworked and under pressure? Lost in thought or just lost? And is his blood as cold as that of the incongruous reptile?

Portrait of a Man with a Lizard (circa 1530-32) is one of many mesmerising Lorenzo Lotto paintings currently on show at the National Gallery in London. In some respects this portrait is representative of the Italian painter’s work. It features a middle-class subject. It is cluttered with objects, artefacts, emblems, and materials, and as such is rich in symbolism. It presents the physical in realistic detail while also prioritising the psychological: going beyond surface-deep expressions and laying bare all manner of human emotions, frailties, and oddities. There is a deft blend of light and shade, equal levels of intimacy and intensity, plus a general aura which helps convey the impression we are surveying something that is, at once, what-you-see-is-what-you-get self-evident and head-scratchingly enigmatic.

Lotto was born around 1480 in Venice. After failing to make his mark there he uprooted and began travelling in search of fame and glory. His peripatetic life encompassed extended stays in Bergamo, Treviso, the Marches, and Rome. Unlike his contemporary, and indeed superior, Titian, he never received commissions from royal courts or the Venetian aristocracy. Instead he was hired by local dignitaries and influential figures – merchants, clerics, doctors, lawyers – along with skilled tradesmen, and came to be lauded as a pictor celeberrimus, or “very famous painter.” He returned to Venice in the twilight years of his career and later retired to a religious sanctuary in Loreto. When he died in 1556, his reputation went with him, and he languished in semi-oblivion for over three centuries until the art historian Bernard Berenson hailed him as one of the finest portraitists of the Italian Renaissance. Lotto was, he claimed, “the first Italian painter who was sensitive to the varying states of the human soul.”

The majority of the work displayed in “Lorenzo Lotto: Portraits” bears this out. Portrait of a Young Man with a Book (about 1525) depicts just that, only the book is shut, a protective hand covers it, and a suspicious and somewhat disdainful face seems to reprove the viewer for voyeuristically interrupting. Portrait of a Man with a Rosary (about 1518) exemplifies absolute devotion: the tight-lipped, almost no-lipped subject fingers his beads and remains so entranced that it is impossible to meet his far-off gaze. In Giovanni Agostino Della Torre and his son, Nicolò (about 1515-16), the former, an elderly physician, clutches an unwieldy medical tome in one hand and a handkerchief in the other. He appears stoic, managing the weight of both the book and the responsibility that goes with his profession – but the giveaway is his watery red-rimmed eyes which suggest he has seen too much or lived too long.

“Great artists attract base prejudices,” maintains Julian Barnes. But while Degas has been branded misogynistic for presenting women performing private functions behind closed doors, Lotto has been charged with the same for barely presenting women at all. It is true that men preponderate in this exhibition, with women cropping up either as token Virgins in busy religious compositions and altarpieces, or as dutiful wives in portraits of married couples. But when a single woman happens to be the sole focus of a picture we are arrested by the novelty and linger that little longer to evaluate Lotto’s brush with femininity. The standout work here is Portrait of a Woman inspired by Lucretia (about 1530-33), described by one of the exhibition’s curators as perhaps Lotto’s most heroic painting. The lady stands and fills out the picture, thanks in part to her open arms and puffed-out velvet dress. In her hand is a drawing of the classical heroine Lucretia about to stab herself. But the woman’s head is cocked to the side – a pose that from anyone else might denote vulnerability but which here smacks of confidence, even defiance – and her mouth is so rigid and her presence so commanding that it is hard to imagine her being ruffled, let alone driven to commit the same desperate act.

This portrait and others come saturated with detail and studded with iconography. That detail, though intricate, is so high-definition it is difficult to miss, whether warts-and-all blemishes on a bishop’s blotchy face or blue veins on a monk’s bald pate. Lotto’s figurative elements range from objects and gestures (many a pointed finger or clenched fist) to letters and inscriptions. In one of his most famous portraits, Lucina Brembati (1520-23), the letters “CI” etched into the middle of a tiny crescent moon (luna) spell out the sitter’s name. And in one of his most striking portraits – and arguably his masterpiece – Andrea Odoni (1527), a Venetian art collector stands surrounded by a selection of his ancient Roman statues and figurines. In neither picture do the signs and objects compete with the subjects for our attention (Odini is such a bear of a man it is impossible to ignore him). We can choose to overlook them, or treat them as decorative flourishes, a kind of visual background noise. Or we can opt to read into them, to crack their code and parse their significance. If we go that extra mile we come closer to learning who Lotto’s sitters are, what their social status is, what they feel, and what makes them tick.

Lotto’s artistic power never truly waned but towards the end of his life his finances dwindled. “Art did not earn me what I spent,” he lamented. This outstanding exhibition gives a good account of that expenditure. For Lotto did more than just paint what he saw. He delved deep, empathised and understood, and in the process opened up hearts and minds.