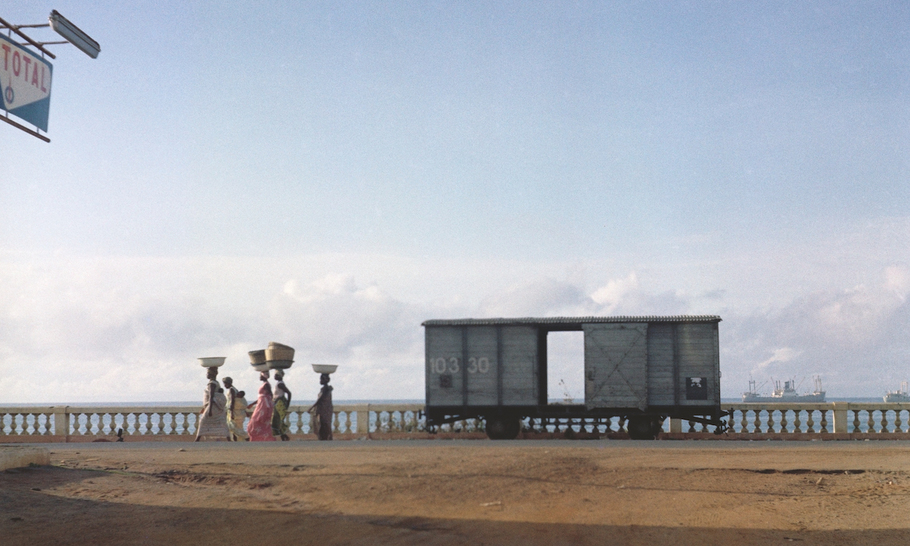 This is a lush compilation of photographs taken by Todd Webb in Sub-Saharan Africa over 60 years ago. They were all shot in 1958, halfway through the first 16 years of my life spent in Northern and Southern Rhodesia, now Zambia and Zimbabwe, and so bought alive memories and associations of a happy, sheltered childhood. They also reminded me that being brought up in a country far away from “home” (the UK, apparently), means one’s loyalties are often muddled and remain so. Since Colonial Africa’s legacy is, in any case, weighed down with ambivalence I did not immediately read the accompanying essays in Todd Webb in Africa, and instead immersed myself in the beauty and familiarity of the pictures. If photographs are witness to a moment in time, they are also hostage to interpretation and in the first instance, I preferred my own. 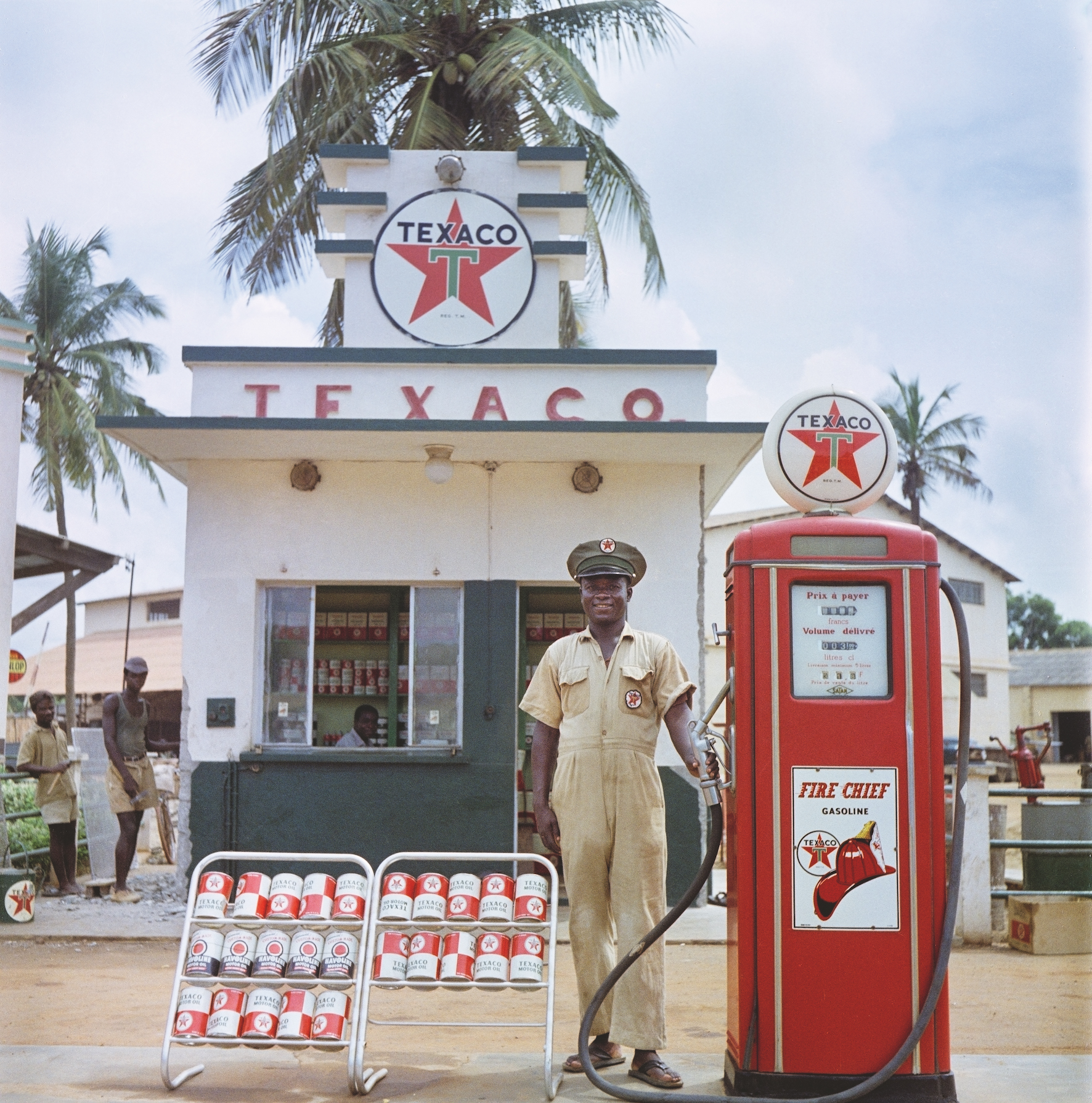 Todd Webb was a distinguished American photographer who, in 1957, took up a three-year commission for the United Nations. This included a five-month tour of eight African countries that had either recently gained or were heading towards self-rule: Ghana, Kenya, the Federation of Rhodesia and Nyasaland, Trust Territory of Somaliland, Sudan, Togoland, Tanganyika and Zanzibar.

The purpose was to document the economic development and technological advancement of these countries and the result was a small brochure (United Nations Photos, Supplement No.7) using 27 black and white photographs. Good enough for the job at hand, perhaps, but during his assignment Webb had taken more than 2,000 photographs, many of them less formal than the UN specification, and most importantly, in colour. He had good reason to believe they had a future, but failed to find a publisher because none were open to the unexpected images of African industry and innovation. It seems that incongruous modernity in the European colonies held little curiosity for white or black American publishing networks in the 1950s.

Although his images tell many different stories, the continent did not immediately match Webb’s expectations either. While in Southern Rhodesia he wrote that it was “sort of like Omaha or some other Midwestern town” and “not anything like any picture of Africa I had imagined.” 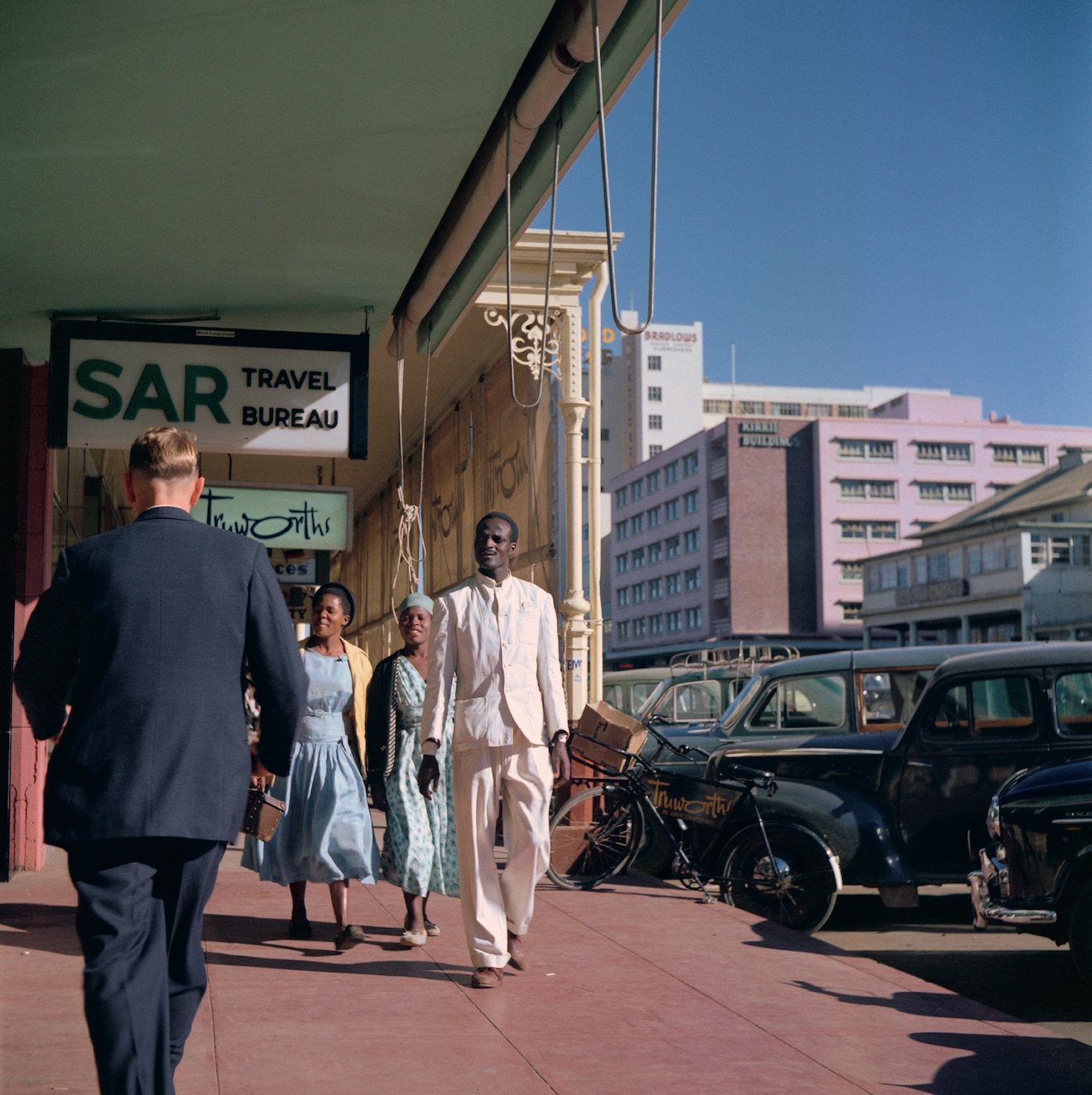 Togoland and Tanganyika was “the best Africa so far.” Maybe because they had coastlines, palm trees and bare-breasted black women with exotic hair braids. But if photographs of Kenyan farmers discussing farming problems with an authoritative Brit, did not suit the publishers back home, Webb could have explored other avenues. 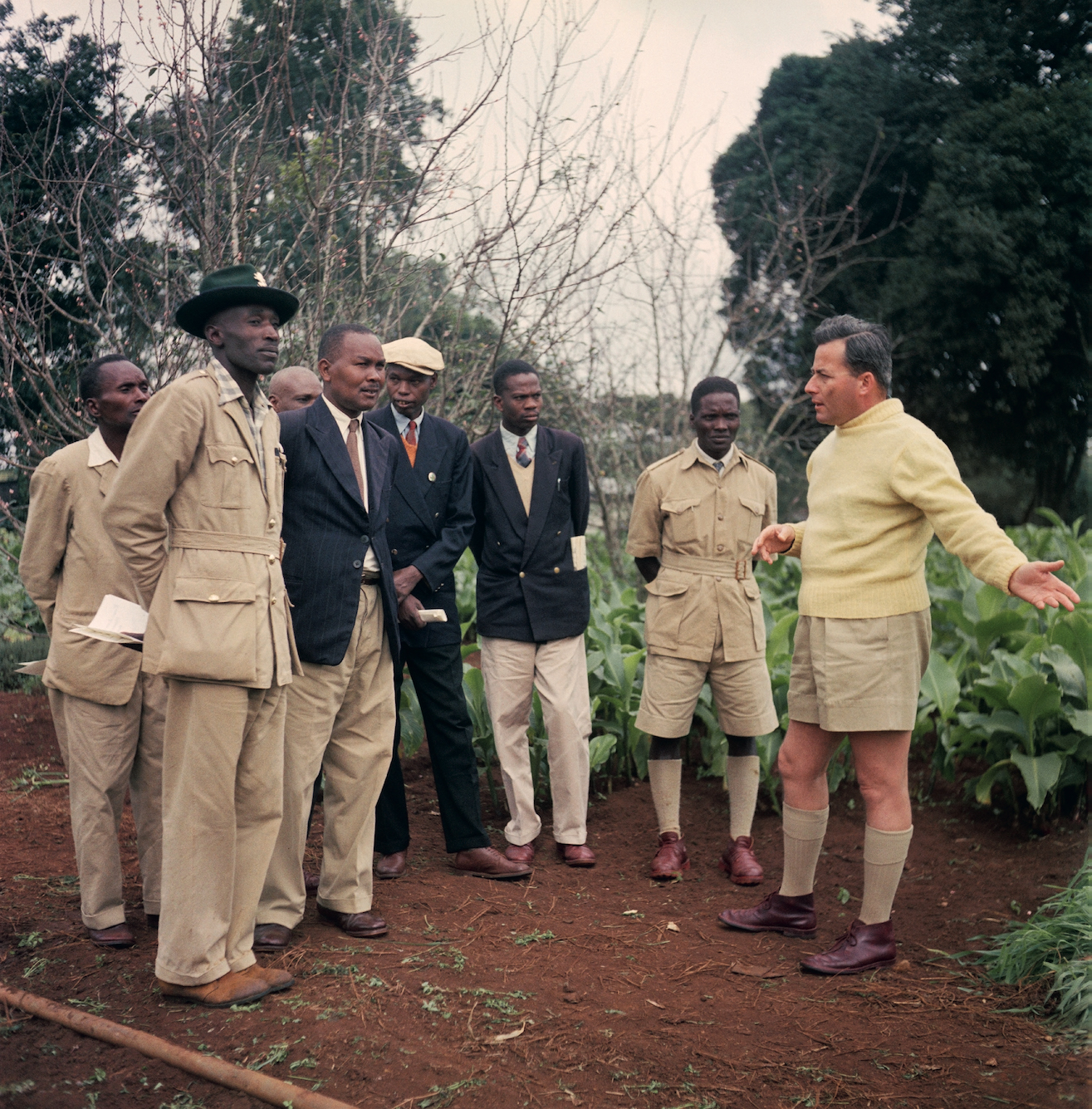 Todd Webb Untitled.  On July 30, 1958 some thirty farmers were invited to discuss agriculture problems at the James Moore Farm near Nairobi, Kenya in order to gain better insight into the operation of a small European farm. © 2021 Todd Webb Archive

If he’d agreed to his work being set next to text written by a fellow in the Colonial Office with a Winds of Change theme, a British publisher for some of the photographs at least, would have easily been found. Fortunately this did not happen. Such a book would have sat unceremoniously alongside the United Nations pamphlet, fit for purpose and long forgotten.

Another reason this collection has not seen the light of day is that it was only recently recovered by Betsy Evans Hunt, the executive director of the Todd Webb Archive. An unscrupulous dealer had purloined pretty much “the sum of his life’s work until 1976” and Evans Hunt is now making it her life’s work to spread the joy and re-establish Webb’s well-deserved reputation. This is a book long in the making which, as she observes, had “fate, courage and a bit of luck” on its side. And also good timing. 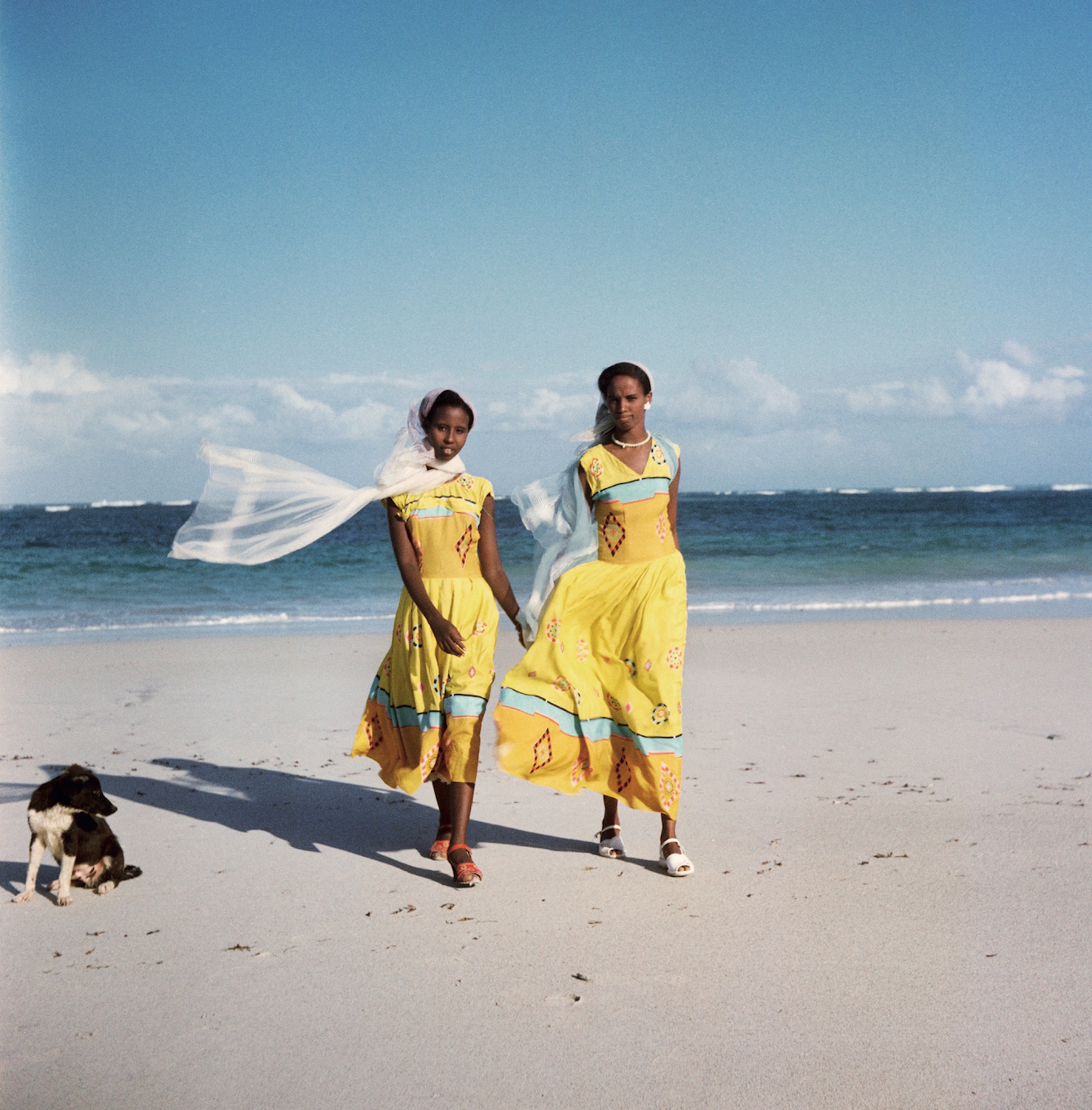 Todd Webb Untitled This could have been a fashion plate taken then in 1958, or now. A beautiful shot of two women walking their dog on the beach in Mogadishu Somaliland (Somalia) © 2021 Todd Webb Archive

There is now a narrative somewhere between Afro-optimism and Afro-pessimism (these are real movements) and Webb’s photographs have been contextualised within that space. These essays have generously explored all manner of perspectives and this will broaden the general appeal of the book, though for me there were two that stood out, perfectly matching my own interests. The first is a long interview by Aimée Bessire with James Barnor, the legendary and exuberant Ghanaian photographer, now in his nineties and living in West London. Barnor is credited with introducing colour photographic processing to Ghana in the 1970s, but is better known for capturing over his long career, images of pre- and post-independent Ghana and black metropolitan life in London. His work is widely exhibited but those discovering it for the first time are in for a rare treat.

The piece by Gary van Wyk had particular resonance for me. Born in Southern Rhodesia in 1960, his parents moved not long afterwards to South Africa in despair of Ian Smith’s regime. Van Wyk is a graduate in law, fine arts and art history and he remains rooted in African politics, its culture and progress. His analysis of Webb’s photographs will be moving and thought provoking for expats inclined to feeling endlessly guilty (and I do) for not keeping the faith.

This is a gem of a book. It is a stunning collection of never-before seen photographs, beautifully produced and sensitively contextualised.

TODD WEBB IN AFRICA; Outside the Frame by Aimée Bessire and Erin Hyde Nolan (Thames & Hudson)