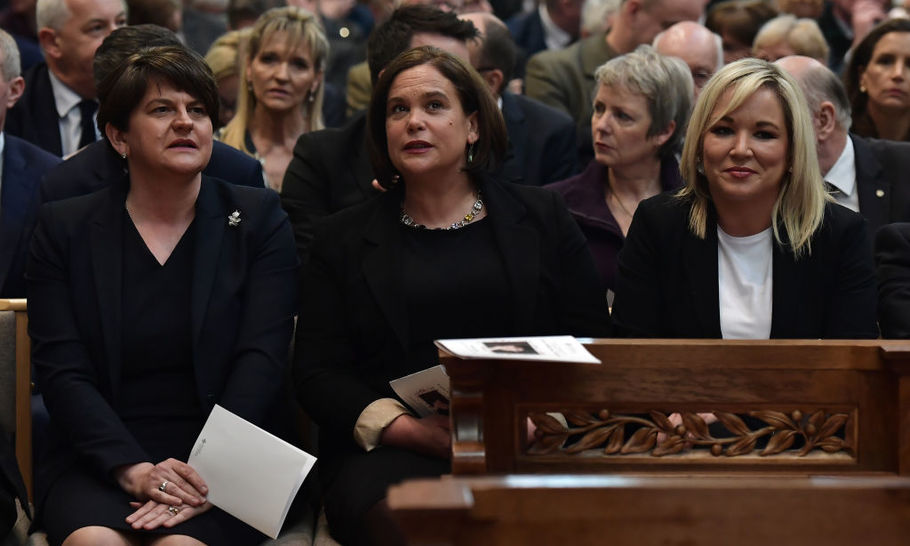 Young, talented, and well-liked, the late Lyra McKee has instantly become a symbol of hope cut down by a bullet – a metaphor for the danger that the province’s past poses to its future. To their credit, leaders from across the political spectrum condemned the violence immediately, fulsomely, even scornfully, doing their best to shame the perpetrators, the New IRA.

This societal solidarity is heartening – but can it suppress further violence? At the level of individual acts, the answer is of course “no”: society has a long-standing abhorrence of murder, and yet murders happen anyway; likewise political violence requires only a single determined person to make it a reality. The “lone wolf” attacks committed by Islamist radicals over the past few years testify to this depressing fact.

Nor do organised groups need to field thousands of fighters to carry out a violent campaign. Action Directe, a communist-inspired extremist group that was responsible for more than 80 bombings in France during the 1980s, had less than two dozen members. So while Sinn Féin leaders today may mock the New IRA – a recent amalgam of a handful of splinter groups – for being far smaller than the Provisional IRA at its height, the newer group’s estimated membership of “a few hundred people” appears more than sufficient to cause serious problems should it ever decide to mount an aggressive campaign.

Majority support for violence is not a necessary pre-condition, either. Even at the height of the fighting in 1973, the Irish Social Mobility Survey showed that 75% of Catholics did not believe political violence to be legitimate. Prior to the Troubles, republicans had initiated acts of guerrilla or revolutionary warfare enjoying even lower levels of pre-existing popular support: the border campaign of 1956-62 and the Easter Rising itself being two of the most obvious examples. The movement’s willingness to act without a popular mandate was concisely expressed by senior IRA officer Ernie O’Malley in his Civil War memoirs: “We had never consulted the feelings of the people. If so, we would never have fired a shot. If we gave them a good strong lead, they would follow”.

Yet though campaigns fought without significant popular support are possible , they are rarely successful. People who take up arms against the state need places to hide, donations to buy weapons, and friendly eyes and ears to warn them of security operations. With such support – and even a passionate minority of the population may suffice – a paramilitary can sustain itself, replace its losses over time and stay in the field. Without it, the organisation must fight a gradually losing battle in which every loss is permanent, like an unprofitable company burning steadily through its initial capital to inevitable bankruptcy.

What turned the quickly-suppressed 1916 Easter Rising into the first act of an ultimately successful war of independence was the conscription crisis of 1918. By presenting large numbers of Irish with the distasteful prospect of being forced to fight for an empire they opposed, it transformed the fitful post-Rising IRA campaign into a broad-based popular movement. Likewise, though the IRA in the first months of the Troubles barely existed as a force, it was spurred into action and then supported in it by a Catholic community that saw itself as the undeserved and vulnerable victim of loyalist violence. That community foundation – even as the majority continued to oppose violence – was enough to sustain the IRA through three decades of fighting.  To sustain it, but not to give it victory.

The Troubles ended in a military stalemate, which the architects of the Good Friday Agreement managed to turn into an enduring but imperfect ceasefire: a war turned down from “boil” to “simmer”. Twenty-one years on, public opposition to any resumption of fighting means a narrow set of options for those who might wish to continue the armed struggle. They can start a full-on campaign – and, without community support, likely wind up dead or in jail within a few months. They can give up the fight entirely (though not the political effort), as the Provisional IRA chose to do. Or they can stay in the violence game just enough to remain a factor to be worried about, an option on reserve for the future. This seems to be the New IRA’s strategy. “We fully accept we cannot defeat the British militarily, or even drive them from Ireland, but we will continue to fight for as long as they remain here,” a representative recently told t he Times . “The attacks are symbolic. They are propaganda.”

In the short term, then, it seems unlikely that Northern Ireland is teetering on the precipice of a new round of the Troubles. Though resentments continue to exist, the Catholic and Protestant populations are now so closely balanced in number and political power that neither side feels politically or physically vulnerable the way they did in 1969. The simmering will continue: the New IRA will likely pursue its “we’re still here” strategy of opportunistic violence; loyalist paramilitaries will still feud (sometimes lethally) over territory and status, and – hopefully rarely – the frustrations and boredom of socially-deprived housing estates will be expressed in riots and petrol bombs. Even far-away London is not immune to the latter phenomenon.

The hope, of course, is that this low heat will gradually cool to room temperature over a long-enough span of time. The question is whether Northern Ireland has that time. The Good Friday Agreement didn’t settle the fundamental question at stake in the conflict: republicans are still working toward unification with Ireland; unionists are still determined to keep Ulster in the United Kingdom. In the midst of a non-functional Stormont, growing discord over “legacy” investigations and uncertainties over Brexit, more attention is being paid to Sinn Féin’s calls for the “border poll” foreseen in the Agreement, that would determine – by majority vote – whether Northern Ireland leaves the Union (assuming the southern Irish also vote to admit it). While only 22% of the province’s population (according to an annual survey of attitudes in 2017) currently supports the idea, independence campaigns in other lands have demonstrated that such percentages can increase rapidly with the right political momentum – and a growing Catholic population will complicate political calculations further. A border poll that seems too close to call, or, worse, threatens to inflict a permanent defeat on the long-held aspirations of one of the sides, may well be the kind of high-stakes, mass-impact political event that nudges significant-enough minorities to support the idea of reaching for the Armalite again if the ballot box seems likely to fail them.

These are not statements of inevitability, of course. But a Northern Ireland that cherishes its comparative peace – and needs time to allow that peace to become full and permanent – would be wise to urgently convert today’s well-meaning rhetoric into policies aimed at mitigating longer-term, deeper risks. There is too much work to be done to wait.