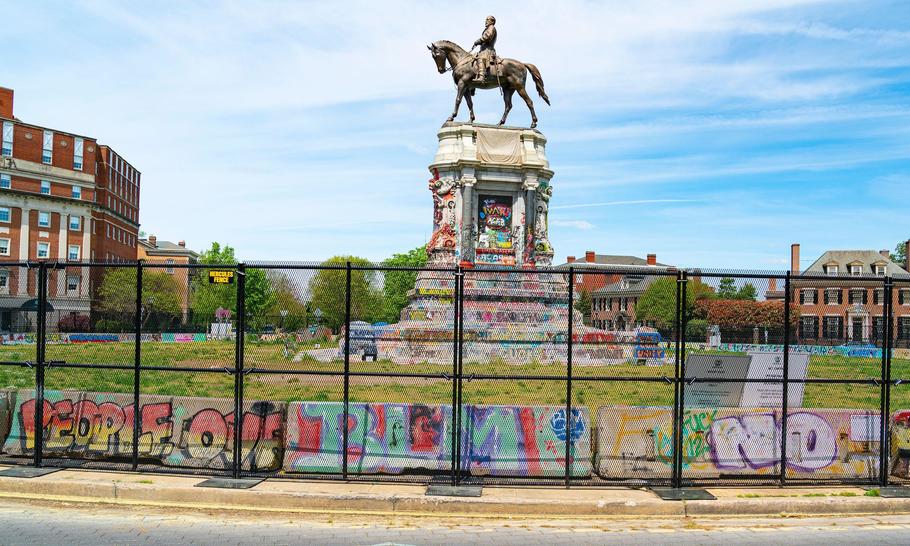 In Britain more than a few historical figures have been knocked from their pedestals. Up and down the country, monuments have been removed, buildings renamed, street signs replaced. Government has tried to quash iconoclasm by advising to “explain and retain”. But this counsel overlooks the fact that figures on plinths often are straw-men for much deeper contentions. The issue is not over money made from slavery in the distant past, but over racism in the present.  For a recent success story showing constructive interaction between activists, academics, and government, perhaps we should look to debates in Richmond, Virginia, over a monument to the Confederate General Robert E Lee.

The American Civil War ended on 9 April 1865 by the surrender of Robert E Lee to Ulysses S Grant. On that day Grant carried himself with the utmost courtesy, and he went to great lengths to recall in his memoirs with how much respect he had approached his defeated foe, his senior in years and in military experience: “ I had known General Lee in the old army, and had served with him in the Mexican War; but did not suppose, owing to the difference in our age and rank, that he would remember me.”

Perhaps Grant ’ s modesty was meant to give a hint of how much easier it is to resolve disputes when both parties show consideration for an opponent ’ s self-respect. Of the negotiation on terms of surrender, Grant wrote, “ Our conversation grew so pleasant that I almost forgot the object of our meeting. After the conversation had run on in this style for some time, General Lee called my attention to the object of our meeting, and said that he had asked for this interview for the purpose of getting from me the terms I proposed to give his army.” The two commanders without further ado proceeded to sign a draft that could fit on a single sheet of paper. Thus was brought to an end a conflict that Grant termed the “ war of the rebellion”.

The gracefulness of the generation that fought the Civil War gave way to the acrimony of generations that remembered it. The antebellum years became the subject of Southern wistfulness, a past that seemed all the more glamorous as time went by. And Robert E Lee was depicted by folklore as a supreme symbol of Southern grace and grit. In May 1890 the unveiling of Lee ’ s memorial in Richmond drew a crowd of over 100,000.

But a menacing undercurrent surfaced in all this postbellum nostalgia. Southern Reconstruction had gone in step with the dismantling of the civil rights of emancipated slaves, and Southern loyalists felt no compunction about flaunting the pro-slavery bias of the Confederate cause. By 1907 a Richmond crowd of over 200,000 witnessed the unveiling of a monument to the Confederate President Jefferson Davis. If Confederates had lost the battles, they won the ballots. Between 1865 and 1900, 20 Southern Congressmen and two Senators were black. Between 1901 and 1970, the number of black Congressmen and Senators from the South was nil.

In Richmond, once the capital of the Confederacy, no fewer than five memorials on Monument Avenue paid tribute to Confederate glory. It took until 1996 for a monument to be added to the civil rights activist (and tennis champion) Arthur Ashe. But redressing the imbalance between white and black honorands did not go far enough to assuage festering anger at continuing racial discrimination. Over the past decade, all but one of the memorials to the Confederates was taken down. Only Robert E Lee ’ s was left untouched.

But on 8 September, by order of the Virginia Supreme Court, his statue’s tenure too came to an end. The deposition that led to the court ruling is of interest beyond the borders of the state of Virginia.

The court reached its judgement on advice issuing from an amicus brief — a form of deposition by someone not party to a legal proceeding. In this case, the brief was submitted by two historians, David Blight and Gaines Foster , authorities on the history of the Civil War and Southern Reconstruction. In their reading , Lee was as complicit in condoning slavery as was the entire Confederate political elite, and it was this very fact that the devisers of his monument sought to project. It is a moot point whether Blight ’ s and Foster ’ s interpretation, that the core concern of the Confederacy was racism, supersedes Grant ’ s, who was there at the time and saw it as a “war of rebellion”.

What matters is that Blight and Foster draw a distinction between the merits of a particular honorand the motivation of a later generation that decides who deserves to be honoured, and why. This discrimination is an invaluable pointer for debates over the place of monuments in public memory. As the Mississippian writer William Faulkner remarked: “ The past is not dead. It is not even past.” Blight and Foster show how communication between ivory tower and judicial bench can be made to work in the interest of keeping historical memory alive.