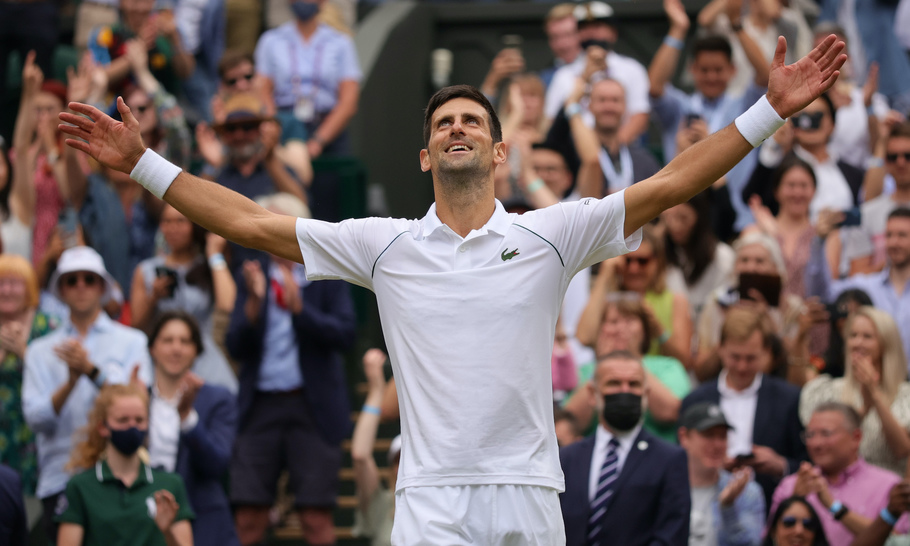 Wimbledon was a fascinating tournament this year, except that it all went out with a bit of a whimper. Matteo Berrettini, the 25-year-old Italian heart-throb, won the initial set at his first Wimbledon Singles Final appearance, polishing off the tie-break with a thunderous serve down the tee. Initially, his opponent seemed a touch nervous. But anyone who thought he was in for a chance at winning the title against Novak Djokovic was dreaming. Novak got his act together and more or less breezed through to the finish line, winning in four sets by 6-7, 6-4, 6-4, 6-3.

Get the Serb on an off-day over the best-of-three sets in a lesser tournament and you might just stand a chance. Dan Evans managed it in Monte Carlo, an event more about the country club’s spectacular scenery and glamorous reputation, where the tennis appears to be somewhat secondary,

But to overcome Novak over the best-of-five in a Slam final is a near impossibility, a mental Everest, unless, of course, you are called Roger or Rafa; except, the Spaniard was a non-starter and Roger had crashed out early.

Novak gets into players’ heads. He also has a habit of playing possum, looking half-dead on his feet. Opponents keep falling for it, getting ideas above their station. And then, out of nowhere, the Serb stages what appears to be a miraculous recovery. It almost smacks of gamesmanship.

At first glance, Novak appears to be a bit of a lightweight, skinny as hell by male tennis standards, but that also makes him fast as hell. The silkiest of drop-shots, with Novak behind the baseline, and he sprints to the net with ease and puts it where he chooses. How on earth do you put the ball away against this man?

He doesn’t play with great power but the serve is well-disguised and he clocks up a respectably high percentage of aces. One of the best returners in the sport, on a par with André Agassi and Andy Murray, he blocks thunderbolts and, once in the rally, opponents run out of ideas. He manages to retrieve what appears to be the impossible and they finally go for too much in sheer exasperation. It must be both exhausting and demoralising.

Novak appears to be made of rubber. Even his service-return stance is reminiscent of a yoga pose. He takes long, long slides on the grass. Who slides on grass? Isn’t that something one does on European clay? But he seems to have reinvented the game.

He is now on Slam number 20, on an equal footing with Federer and Nadal, but he looks as though he has 10 more in him, whereas the other two appear to be almost spent. Rafa, “The King of Clay”, may just grab another couple of French Opens at Roland Garros on his favoured surface and Roger could possibly nab another at Wimbledon, although that’s looking increasingly unlikely after his latest showing.

Novak is now on course for the Grand Slam, winning all four majors in the same calendar year, a feat not achieved since “the Rocket”, the Australian Rod Laver, back in 1969. All he has to do is to win the US Open in September. That may appear easy, given his current form, but he will be nervous at the prospect of entering the history books and nerves will surely play a part — unless you also factor in being disqualified for whacking a ball at a lineswoman’s neck, which he so stupidly did at last year’s event.

But if Djoko achieves that elusive Grand Slam and in doing so, surpasses the tally of his rivals, does that make him the GOAT (Greatest of All Time). On paper, you’d have to say yes.

But what is a GOAT exactly? Is it just about the title tally or is it something more?

Roger Federeristas would ask how you can possibly compare the ungainly Serb (and half the time he does remind one of a giraffe stooping for water) with the sublime Roger? Federer floats, à la Muhammed Ali, perfectly balanced and light-footed and supremely graceful, while Novak is frequently staggering backwards or with body splayed like a rag-doll in seemingly-impossible postures. No-one can call his game pretty.

And if being the GOAT is a popularity contest, then Novak is out of it. He doesn’t appear to understand why he isn’t as popular as his two rivals and seems to crave public adoration. The cupped-hand celebration towards the four corners of the court, a gesture Nick Krygios called “cringeworthy”, seems to say: “Please love me.” But it smacks of just that – desperation. Over and over again, I’ve heard people say something along the lines of: “There’s just something about him I don’t trust.” He’s funny, quick-witted, praises his opponents and makes all the right gestures — and yet…

It could be something to do with his behaviour when he’s down, screaming at his box, angrily snatching towels from ball-kids (when they were expected to handle sweaty towels pre-pandemic). The nearest we see to a Federer tantrum is a shake of the head; Nadal looks skyward, his body rigid in irritation, but that’s about it.

And witness that incredible Wimbledon Final in 2019, where some 95 per cent of the crowd was roaring for the cherished Roger Federer. Rafael Nadal also has a massive fan base, especially in Europe, with his extraordinary French Open 13-title record.

And, rivals Roger and Rafa may be, but they’re clearly great mates off the court (just check out some YouTube videos of them clowning around), and they stick together.

A reporter asked the Serb: “What’s it like being the bad guy?” He dealt well with the question, but it clearly rattled him.

Can you really call a man this unpopular in relation to his nearest rivals, the GOAT?

It’s not just about titles. You need the whole package. So my vote is a “no”. Roger is my man and Nadal a close runner-up.