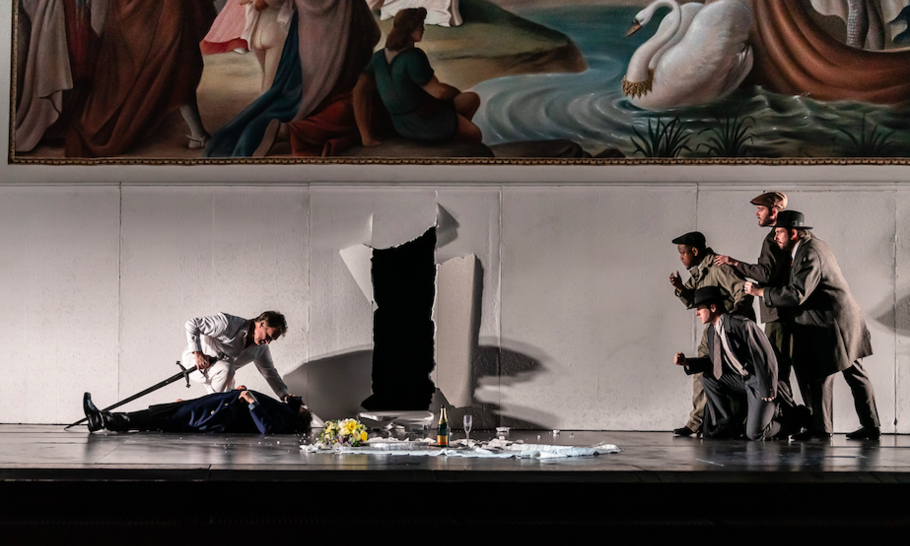 In early 1848, as Kapellmeister in Dresden, Wagner was putting the final touches to his new opera Lohengrin when revolution erupted across Europe. He reacted to the mood of the time by drafting new ideas to re-organise Dresden ’ s musical life, but they were rejected by the Saxon court. When insurrection came to the city in May 1849, Wagner was on the barricades with the rebels — at least according to his own account. When Prussian troops arrived to crush the uprising, he moved to Switzerland, his charismatic personality enhanced as a defeated revolutionary.

Like the master, his hero Lohengrin has bundles of charisma, which he uses to save the heroine Elsa. In this production she is blindfolded and facing a firing squad when he arrives, with lighting that suggests a giant swan overhead, sounding like a helicopter, but in the end he declines to lead the troops into battle, and moves home to the Knights of the Grail.

His reason is simple. He extracts a promise from Elsa that she will never ask him his origin nor name, but she cannot let the matter go as the ambitious Telramund and his scheming wife Ortrud put pressure on her. It ’ s an odd story, whose hero Lohengrin is the son of Parsifal in medieval sources, but this is essentially Wagner ’ s own creation. Musically, however, it is magnificent, and forms a pivotal point in the composer ’ s oeuvre, following Tannhäuser, and shows him moving towards a new type of music drama where the vocal parts emerge through the music.

This revival of David Alden ’ s 2018 production, where huge derelict buildings set at an oblique angle suggest a kingdom whose foundations are subsiding, gives an interesting fascist take on the story in Act 3. Black and red banners emblazoned with Lohengrin ’ s swan motif along with World War II era German helmets, create a sense of Nazi supremacy that finally fails. As the banners fall to the ground, Elsa ’ s long-lost brother Gottfried, transformed by Ortrud ’ s sorcery into a swan, emerges from under one of them, exhibiting new hope for the future. In these days of fighting for the freedom of Ukraine this opera in time of war is a timely revival.

The inherent irreality of Elsa ’ s marriage to Lohengrin is emphasised by the arrival of her magnificent wedding dress, not from local women or female attendants, but from above out of nowhere. The production has serious points to make, and if the stage movement occasionally seemed unnatural, it is easy to close one ’ s eyes and listen to the music, sublimely directed by the Czech conductor Jakub Hruša.

As Lohengrin and Elsa, the American tenor Brandon Jovanovich and the Irish soprano Jennifer Davis were excellent, both showing an engaging vulnerability, which in his case I prefer to the resonant superiority Klaus Florian Vogt gave the role four years ago. As Telramund and Ortrud, the American bass-baritone Craig Colclough and the Russian mezzo Anna Smirnova were terrific, even outstanding in her case . The Hungarian bass Gábor Bretz as King Henry showed a fine tone, but he seemed a little underpowered. The chorus were terrific as usual, and Derek Welton as the Herald produced an immensely strong vocal presence, unsurprising for a man who has previously sung Klingsor at Bayreuth. This was a team that worked beautifully together, giving a superb performance of this revolutionary Wagner opera.