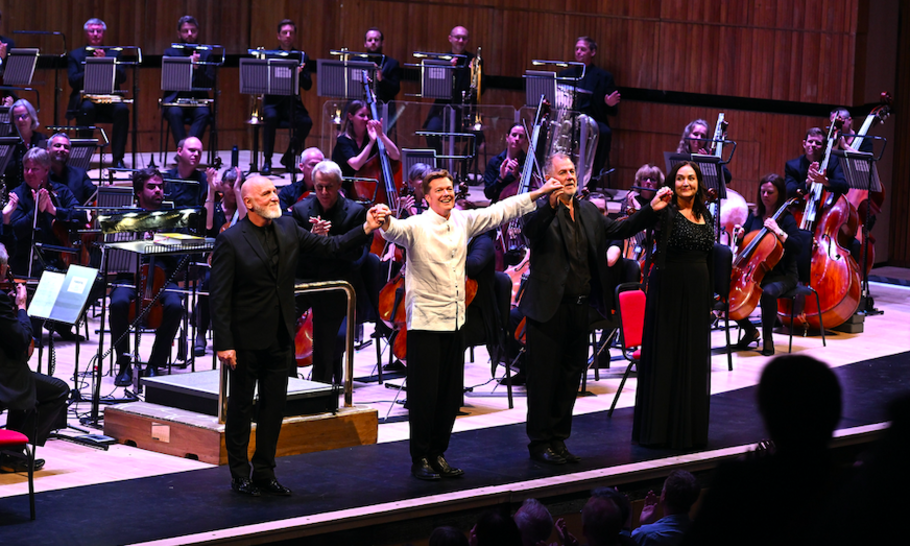 Back in 2016, Opera North brought Wagner ’ s Ring cycle to the Royal Festival Hall, and they have now followed up with Parsifal . It was most welcome. The audience of Wagner lovers cheered, particularly for the conductor , Richard Farnes, and even for the leader of the orchestra, David Greed, who was retiring after 44 years with the company.

When Wagner first produced Parsifal in 1882 at his new opera house at Bayreuth he called it a Bü hnenweihfestspiel (roughly: “sacred stage dedication play”) rather than an opera. It is unique among his works in that the Christian sacred mysteries are very much to the fore. Perhaps fearful of accusations of blasphemy, Wagner himself denied that its mysticism was specifically Christian. He had become interested in Asian philosophies, notably Buddhism. He even wrote a sketch for an opera, Die Sieger (“The Victors”), based on a story from the life of Buddha, with themes of self-renunciation, reincarnation and compassion. These ideas (which also owe much to the philosophy of Schopenhauer) were later explored in Parsifal . Even exclusive social groups, like the castes in Hinduism, appear there in medieval Christian guise as the Knights of the Grail.

The name “Parsifal” or Perceval, originally one of Arthur ’ s knights of the Round Table, has an Indo-European origin via Persian (fal is cognate with fool). In Wagner’s myth, which is heavily indebted to the medieval romance by Wolfram von Eschenbach, Parsifal is the simpleton who holds the key to the redemption of Amfortas, ruler of the Knights of the Grail, who was wounded with his own spear by the sorcerer Klingsor. This evil magician was once a knight too, but deliberately emasculated himself to achieve power. His slave , Kundry , has already lured Grail knights to their destruction by her irresistible allure. She, however, is herself a strange victim, unable to find rest but condemned to roam the world after she laughed at Christ on the Cross.

Despite Wagner ’ s protestations, the symbolism is heavily Christian. According to his own account, he originally conceived the idea on the morning of Good Friday in 1857, though his wife Cosima later pointed out this date had a certain poetic licence, quoting her husband as saying, “It was not a Good Friday at all – just a pleasant mood in Nature which made me think, ‘This is how a Good Friday ought to be.’”

In any case, that date in the Christian calendar plays a crucial role in the opera. When Parsifal reappears, after years of wandering, it is Good Friday. The Knights are desperate for Amfortas to unveil the Grail, so that its sustaining powers can nourish them all. His inability to do so has already caused the death of his father Titurel, and it is only Parsifal who can now undo the slow degeneration of the community.

When he does, giving peace at last to Kundry and allowing Amfortas to die, it is a sublime moment. The tremendous chorus of the anxious knights is replaced by gentle music, lovingly played by the Opera North orchestra under Richard Farnes, and a sublime tranquillity comes to the world.

The singing of the principals was terrific. As Gurnemanz, the senior knight who recognises at the end that the young man he once sent packing is their saviour, Brindley Sherratt was outstanding. This role requires huge stamina during his long Act 1 monologues, which were delivered with wonderfully clear diction. His performance, both vocally and dramatically, was peerless. Robert Hayward made a suitably anguished Amfortas, Katerina Karn é us a gentle-voiced Kundry, and Toby Spence an intelligently self-aware Parsifal, if slightly underpowered. As Klingsor, Derek Welton was intriguingly subtle, with an air of thoughtful mischief, in a very strong performance, and Stephen Richardson sang with unusual power as Titurel, standing at the back of the choir.

Hearing Parsifal in the concert hall is a treat that allows more vocal and orchestral clarity than one usually finds in the opera house. I only wish we had had a little semi-staging, at least in the form of the holy spear, and perhaps a basin for Kundry with which to wash Parsifal ’ s feet. More could perhaps have been done with the lighting, particularly during that glorious moment in Act 1 when Gurnemanz takes Parsifal to visit the ceremony of the Grail, standing at the front of the stage, as Parsifal sings “Ich schreite kaum, doch w ähn ’ ich mich schon weit ” (I scarcely step, yet feel I move apace), to which Gurnemanz replies “ Du siehst, mein Sohn, zum Raum wird hier die Zeit .” (You see, my son, here time is one with space). Magic.