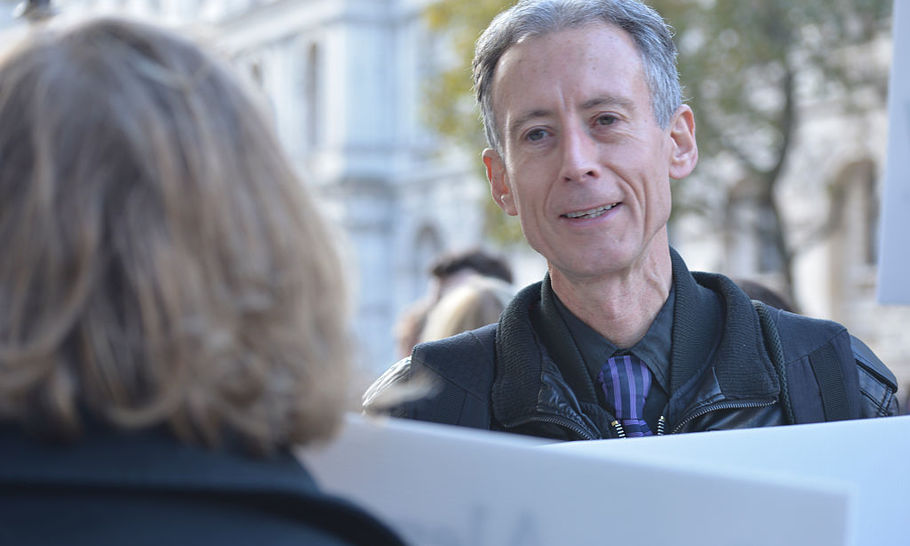 It all began, as do many an argument these days, on Twitter. Peter Tatchell, long time gay activist and human rights campaigner, who has, in the last decade, morphed into a ‘national treasure’, tweeted his criticism of ‘white feminists’.

“When UK Muslim women & girls are sexually abused, subjected to FGM & domestic violence or forced to wear the hijab & to marry against their will, white feminists rarely speak out & stand in solidarity. Some are too busy demonising trans people as a threat to women. So wrong!”

To me, this tweet was like a rare steak being waved in the face of a vegan. My response was swift and uncompromising. Tatchell was clearly speaking about feminists such as myself, as I have been accused, for the past 14 years, of transphobia. The evidence? I wrote an article supporting a rape crisis centre in Vancouver, Canada, which declined the offer of a male to female trans person to counsel rape victims. In the article, I argued that transgender women have been socialised as male, and benefit from that privilege.

As a feminist activist, I have long worked alongside women born into strict Muslim communities to challenge male violence and abuse. I was the first journalist in the UK to expose, in the national press, the phenomenon of grooming gangs involving men of Pakistani Muslim heritage, and to offer an anti-racist, Leftist critique of why the police appeared to be giving them free rein.

In my response to Tatchell’s latest insulting diatribe, I pointed out his well-documented views on the age of consent, and his apparent defence of child sexual abuse.

In 1997, Tatchell wrote to The Guardian in support of a book (for which he contributed a chapter) called Dares to Speak, a favourable exploration of paedophilia, published by the Gay Men’s Press – stressing the “positive nature” of some child-adult sexual relationships, and announcing that several of his friends had had sex with adults from the ages of 9 to 13, and were none the worse for the experience.

Tatchell was displeased about a review by the journalist Ros Coward of ‘Dares to Speak, collected articles from Paidika, Journal of Paedophilia’. The book, she argued, was clearly part of a wider campaign to abolish all ages of consent and re-brand child sex abuse as more palatable in the eyes of wider society, by framing it as ‘enjoyable’ for the victims.

“The book refuses to take seriously sexual abuse and its consequences,” wrote Coward. She was right.

In his letter to the Guardian, Tatchell cites one of the chapters, written by an anthropologist, Tatchell writes:

“Prof Herdt points to the Sambia tribe of Papua New Guinea, where all young boys have sex with older warriors as part of their initiation into manhood. Far from being harmed, Prof Herdt says the boys grow up to be happy, well-adjusted husbands and fathers.”

The Sambia boys are, in fact, emotionally, physically and sexually tortured into manhood. The so-called rituals they endure include being forcibly separated from their mothers aged 7-9; being made to ram sticks into their nostrils until they bleed out ‘pollution from their mothers’, and being made to fellate older men and drink their semen. Child abuse in Papua New Guinea is generally widespread, with a number of scandals having emerged over the years as survivors speak out – as opposed to male anthropologists speaking out for them.

The Dares to Speak debacle is far from the only example of Tatchell’s apologism for child abuse. In 1997, Tatchell posted an interview with 14-year-old ‘Lee’, which in 2007 was republished by IPCE, a Dutch paedophile publication.

In the interview, which was headlined, ‘I’m 14, I’m gay & I want a boyfriend’, Tatchell asks Lee what he thinks, “…about paedophiles in general?”

“It depends on what kind of paedophiles”, says Lee. “Those who have sex with little kids should be strung up by the bollocks. The paedophiles I knew always asked me if I wanted sex. They didn’t pressure me. If you consent to having sex with a paedophile, it’s fine. If you don’t, it’s not”.

During the interview, Lee speaks of being in residential care, and, at the age of 14, being sold for sex to adult men in gardens and bus stations. Tatchell appears only to be interested in pursuing the line about how much Lee says he likes sex with adult men.

Some days after my response to Tatchell’s attack on ‘white feminists’, he posted two tweets in which he apologised for giving the impression that he was using the trans issue to divide black and white feminists, claiming that his only aim was to “support victimised Muslim women”. For a man so passionate about protecting women from marginalised communities, he seems singularly uninterested in protecting boys being tortured into manhood in Papua New Guinea.

In a letter to The Guardian in 1997, Tatchell wrote that he did not “justify” child abuse, and was only pointing out that in some cases, children might enjoy sex with adults. Some of his supporters accept that argument, and others dismiss his repellent views in light of the human rights work for which he is better known.

Perhaps he, and his followers, might like to consider why feminists like me are still being targeted and vilified 14 years after writing a perfectly reasonable comment piece about transgender ideology, despite my 40-year record of fighting for the rights of women and girls?