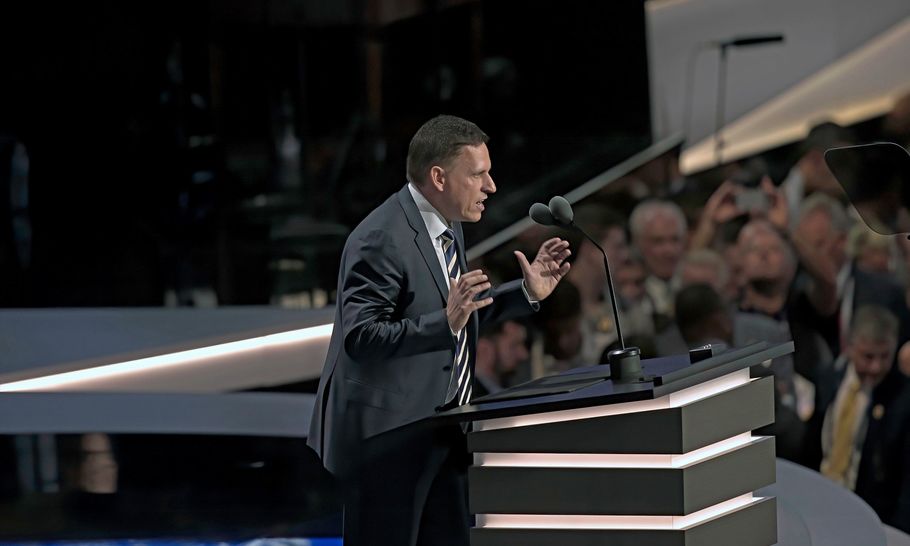 As the Western world moves ever more from an industrial and service economy to a digital one. The leading figures in Big Tech gain ever greater riches, fame and influence over everyone’s lives. The titans of Big Tech can sometimes seem to be more interested with their pet projects than the real world. Elon Musk toys with buying Twitter, Jeff Bezos plays with his own personal rocket ships and Mark Zuckerberg plots to get the world to immerse itself in the Metaverse he is building. But there is one notable exception to all this, the grown-up in the Big Tech room, a serious man for serious times: Peter Thiel.

Peter Thiel first became a public figure as the co-founder of PayPal in the late 1990s, but his real story begins earlier. The key to understanding Thiel, and why he is a consequential figure, is his youth. He spent his entire university career, 1985-1992, at Stanford University. This exposed him to the ideas of political correctness and identity politics that were just beginning to be formed, but have since taken over the Western world mainstream: ideas that we now call “woke”. The other key fact from his youth is he was American school chess champion. As a serious chess player, he is always thinking many moves ahead.  These youthful factors forged the adult Peter Thiel, who is the centre of a number of overlapping spheres of influence: technological, political and intellectual.

In the case of technology, Thiel is known as the “Don of the Pay Pal Mafia”. This mafia are the group of people (actually all men) who were involved in the founding of PayPal twenty years ago and have gone on to found or transform a remarkable number of other companies: LinkedIn, Tesla, SpaceX,  You Tube, Yelp and Yammer. The most famous of these people is not Thiel, but Elon Musk, who is very much the front-of-house performer, with Thiel as the impresario.  As well as those he worked with, Thiel himself was the first outside investor in Facebook (as was) and only quite recently — February 2022 — left the Meta (as it is now) board. Thiel’s most significant current tech company is undoubtedly Palantir. As I have written here for TheArticle, Britain will be hearing a lot more about Palantir in the future, especially in the context of the NHS. While the key executive at Palantir is Alex Karp, the CEO, it was Thiel who convinced Karp to join Palantir in the first place.

In relation to politics, the media always mention Thiel’s backing for Trump in 2016 — as if there were not plenty of other American billionaires who did not support Trump as the Republican candidate. Thiel’s role is significant because he supported Trumpism, as much as Trump himself. He is helping to reshape the Republican Party from a pro-free trade, pro-foreign intervention party, into something very different. The emerging Republican Party, while continuing the social conservatism of the 1980s, is much more protectionist, favouring stronger border controls and scepticism about foreign interventions.

Typically of Thiel, his own associates are seeking to take front line elected positions. J D Vance, who worked for one of Thiel’s firms, has just secured the Republican nomination for a Senate seat in Ohio. His outside shot of winning the nomination would almost certainly not have succeeded, but for Thiel’s donations of over $10 million to a superPAC supporting Vance. In Arizona, one of the Republican candidates seeking the Senate nomination is Blake Masters, who not only worked for Thiel, but co-wrote a book with him. Thiel, again, boosted his campaign with an initial $10 million dollar donation to a supportive superPAC. If Masters wins the nomination and he and Vance win in November, there will be two young Senators who would not hold office without Thiel’s support.

His last — but perhaps most important in the long run — sphere is intellectual. When Jordan Peterson became a global intellectual superstar in 2018, on the back of his book 12 Rules for Life and the associated media appearances, he also became the leading figure in what became known as the Intellectual Dark Web (IDW). The IDW is a group of thinkers, YouTube personalities and journalists that challenged the increasingly Woke narrative of mainstream media and culture. It was not Peterson, however, who coined the term IDW, but Eric Weinstein. Eric Weinstein is a public intellectual, physicist, but also an employee of Peter Thiel. Thiel’s connection to Weinstein has led some of the dimmer parts of the left-wing media to denounce the IDW as a “far right conspiracy”. Anyone who has ever heard Eric Weinstein speak will know how ridiculous that is. The fact Weinstein is clearly a member of what used to be thought of as the mainstream Left shows Thiel’s embrace of different intellectual influences. The true impact of IDW will only be felt in the next twenty years, as those influenced by its podcasts, ideas and books filter into the wider culture.

The scale of the intersecting spheres of Thiel’s influence on American culture is difficult to overestimate. It is American culture that sets the tone for the rest of the Western world: just look at the international coverage of the overturning of Roe v Wade by the US Supreme Court. This why Peter Thiel, his ideas and his associates are going to be influencing the world for decades to come.