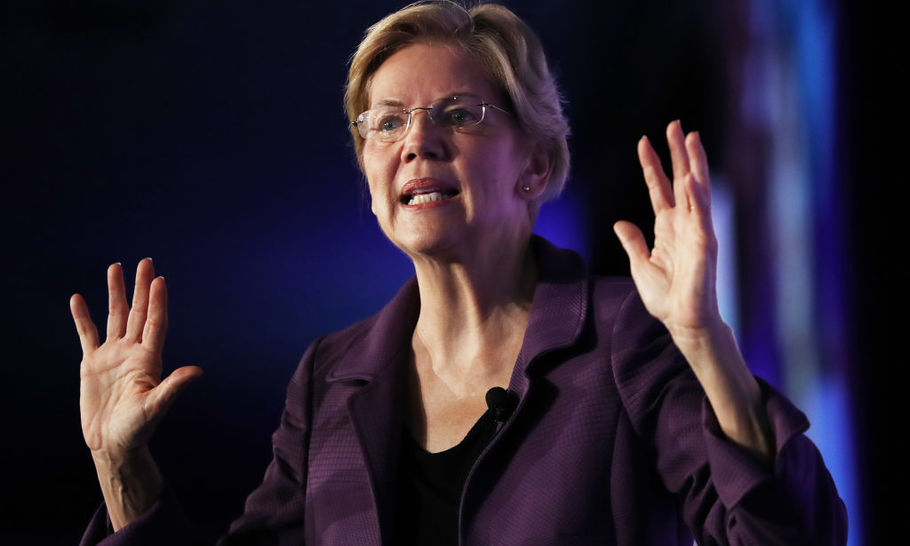 The democrat Elizabeth Warren is slowly turning into the front-runner to be the Democratic nominee in the US presidential elections.

That may be why she is at the centre of a storm about whether she lied about being sacked as a teacher in 1971 when she was pregnant.

Less than a year ago, Warren was in fourth place behind Joe Biden and Bernie Sanders and Beto O’Rourke in the bid to take on Donald Trump in the presidential elections next year.

O’Rourke has fallen away completely and support for the two septuagenarian men is dropping off as Warren surges. Biden, whom the young radical Democrats have always disliked, is turning out not to be such a safe pair of hands – literally. He has faced accusations that he abused his powerful position to touch and kiss women in a way that they found uncomfortable. And the accusations from Trump about how he tried to help his son Hunter, however untrue, have not helped either.

Bernie at 78 is proving too old, which was confirmed when he was admitted to hospital earlier this month with a heart attack.

So Warren is coming out on top. And that is why the attacks have started in earnest. There will be more to come, and they will be based on the fact she is a woman.

The “scandal” around her pregnancy is barely a scandal. It all turns on the reason why Warren left her teaching job almost 50 years ago. She has been saying on the campaign trail it was because she was “visibly pregnant”, using her personal experience to demonstrate how pregnant women are discriminated against in the work place.

But an article in the Washington Free Beacon, a conservative website launched in 2012, said it had unearthed minutes from the Riverdale school board which proved that that they voted to extend her contract for her second year. The implication was that Warren was effectively “lying”.

Warren says that decision was in April, when she was only four months pregnant and her pregnancy was not visible. It was when she began to “show” that they told her to go. This was common practice at the time. It was not until 1978 that there was a specific law in the USA which made discriminating against pregnant women illegal.

Warren has turned the accusation to her advantage, asking women all over the country to tell their stories. It turns out that women, especially ethnic minority women in lower paid jobs are, as in the UK, discriminated against when they are pregnant – and even because they are of child-bearing age.

So one-nil to Warren. But the attack is telling. First, Warren is accused of being a liar. One of Trump’s favourite attacks on Hillary Clinton was that she lied. It is part of a male populist trope that women can never be trusted and will always lie, particularly about sex and getting pregnant.

Second it is an attack on her, not as the formidable older woman she currently is, but on the young, vulnerable pregnant woman she was in her 20s, who must have wondered if her career was over because she had decided to have children. It is rather the same as when the Daily Mail tried to diminish the powerful Baroness Brenda Hale after she had delivered her Supreme Court judgement on proroguing parliament with the headline “Ex-barmaid with a spider brooch who spun legal web that snared PM”.

Third, and perhaps most insidious for all women leaders, amplifying the debate on her pregnancy plays into the narrative that she cannot be trusted as the candidate, because she is fixated only on “women’s issues”.

Elizabeth Warren is, in many ways, similar to Lady Hale. They are both women who made it as law professors before they entered public life, both are in their 70s and both are expert and unafraid.

For Warren this means she has real policy depth. She is a specialist in bankruptcy law and believes the government did not do enough to prosecute the bankers who caused the financial crash.  Under President Obama she set up the Consumer Financial Protection Bureau, which regulated how much credit card operators can charge and reformed payday loans.

She is running now on a radical anti-corruption ticket and making the argument that everything from climate change to the financial system can be tackled if vested interests are challenged. In her first major foreign policy speech she said: “Beginning in the 1980s, Washington’s focus shifted from policies that benefit everyone to policies that benefit a handful of elites, both here at home and around the world.” She also believes in breaking up the big tech companies.

Warren is the expert “girly swot”, who populists hate. Look out for more attacks which play the woman rather than the ball.