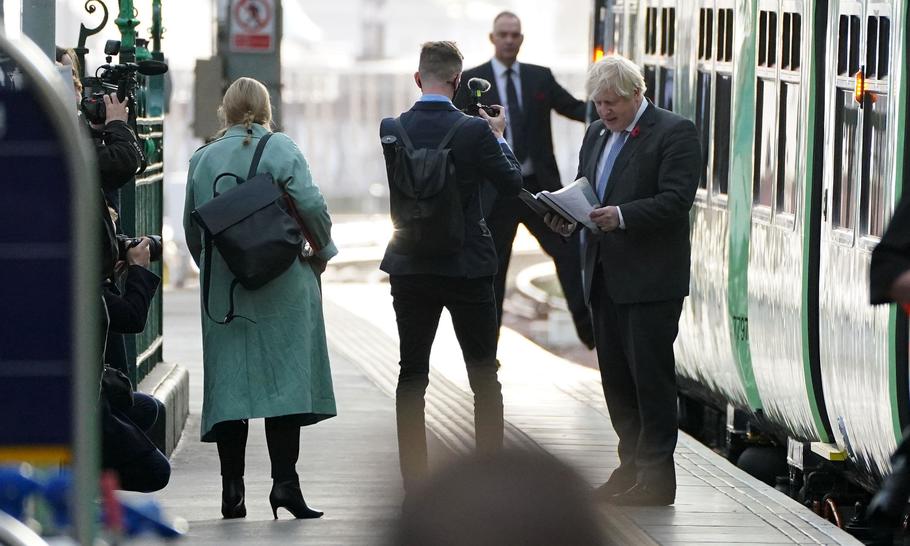 Reporter: Do you regret the huge error of judgement that saw you attempting to rewrite Parliamentary rules in favour of a friend and will you apologise to the public?”

Prime Minister: “ I ’ m here to encourage people to get their booster jabs…”

A dissociative disorder is one where you feel disconnected from yourself or the world around you. Dissociation can last a short time (hours or days) or longer (weeks or months). Politicians are especially prone to the condition.

Boris Johnson ’ s disorder appears to be chronic. As a child he said he wanted to be “ world king”. This story of the endearingly bumptious, greasy pole-climbing child is touted ad nauseam as part of the man and the myth, assiduously cultivated to foster the image of a great leader in the making.

Young Boris ’ s vaulting ambition, we are repeatedly told, combined with his erudition, his rhetoric, his charm, his thatch and his winning streak foretold a great destiny, one that would involve reclaiming Britain ’ s role as a country of global significance.

Well, the myth is now well and truly debunked. What we have instead — and we were warned — is a man who desires power, craves it, wallows in it, uses it ruthlessly, but cannot bear the responsibility that comes with it.

When confronted he blusters or he hides: in his pal ’ s villa in Marbella or in a fridge in a Yorkshire dairy. Faced with the prospect of answering tough questions in the Commons, urgent business or a long-standing engagement mysteriously pops up. He bunked off crucial early COBRA meetings when the virus began to look like a serious threat to the nation ’ s health and security.

He makes promises he can ’ t keep: “ We shall send the virus packing.” Or perhaps he really believes, as if engaged in some childish Game of Thrones , that having been anointed by royal prerogative, his powers transcend those of mere mortals.

Johnson also makes promises or policies whose implications he almost certainly doesn ’ t understand and cannot justify when challenged: levelling up; threatening to pull the rug from under the Northern Ireland Protocol; the hard choices of climate change; the role of Parliament and the judiciary in keeping the executive in check.

He is not, as his schoolmaster at Eton suggested as part of the careful myth-making of a wunderkind, one of a kind. The world is full of people who will stop at nothing to get what they want. But he does happen to be Britain ’ s Prime Minister , which makes his personality a legitimate subject of scrutiny.

Johnson is big on loyalty. He expects fealty to the point of sycophancy. But, as the tawdry saga of Owen Paterson shows, when it comes to saving his skin he can turn on a dime.

The knives are now out for Jacob Rees-Mogg, Leader of the Commons. He is being lined up as the fall guy for presenting Johnson with a “watertight” plan that began to leak the instant it was floated. That’s as may be. But if Johnson’s instincts were as sharp as his supporters claim he would have spotted the trap he was setting for himself.

His boosterism is not just about persuading voters that everything is going to be fine. It ’ s also, one suspects, about persuading himself that every little thing is for the best in the best of all possible worlds, like a child whistling in the dark.

He is the blinkered optimist living in a virtual reality of his own making. Johnson is the perfect candidate for what scientists call the Simulation Point, a Matrix-like world where everything is as you want it to be.  And if it isn ’ t, you change channel.

When he says, with that slightly sheepish look and cultivated mumble, that he doesn ’ t see what else is to be said about the Owen Paterson affair, part of him means it. Let the bodies pile high; f–k business. These are expressions that spring not just from hubris, but from an inner conviction that he can ’ t possibly be wrong, that he is to the manner born.

Watch him stride, maskless, in shirt-sleeves, flanked by masked hospital staff, brazenly breaking ward rules and you have to ask: why does he do this? Is he giving the world the middle finger? Is he making a political point? Who is he trying to impress?

But the worm is finally beginning to turn. His latest U-turn over the disastrously handled sleaze inquiry has left a sour taste in the mouth of many of his own backbenchers. Tellingly, many of those repelled by the fiasco represent so-called Red Wall seats, disproving the premise that the average voter doesn ’ t care about ethics.

The mystery of Johnson ’ s continued popularity (other than the fact that he is not Jeremy Corbyn, plus Keir Starmer ’ s tepid performance) can probably be explained by a) Brexit and b) his relentless boosterism. We have had a hard time and we are all, to a greater or lesser extent, suckers for good news. But that doesn ’ t make us stupid. If something feels too good to be true, that ’ s probably because it is. And, in time, we see that.

The Boris Johnson myth, the winner, the one-nation Tory who bestrides the shires and the Red Wall with incurable optimism, bridging a previously unbridgeable electoral divide with a fresh, radical third way, is slowly but surely being punctured.

Senior Tories are now divided into distinct camps: those who would still die on a hill for Johnson: Nadine Dorries, standard-bearer of the Prime Minister ’ s culture wars; the over-promoted Kwazi Kwarteng; George “S torm in a teacup” Eustace and, last but not least, Deputy Prime Minister Dominic Raab who can ’ t see why a Devon MP working from a Caribbean tax-shelter earning £1m may not be serving his constituents.

In the other corner, his likely challengers in the cabinet — Liz Truss, Rishi Sunak, Michael Gove and Sajid Javid among others — have maintained a healthy distance as Downing Street stumbles from one blunder to the next.

The Tory press are also no longer unquestioningly loyal. Shades of 1931 when Lords Beaverbrook and Rothermere (of the Express and Mail respectively) turned on the Tory leader Stanley Baldwin, accusing him of running an “insolent plutocracy”.

Baldwin retorted, borrowing a line from Rudyard Kipling, that the press barons wanted “power without responsibility — the prerogative of the harlot throughout the ages”. It’s an unpleasant piece of misogyny but it’s not without relevance.

Johnson is the leader who does not lead. He is also the clown that cannot stop clowning. His speech last week at the Cop26 climate summit, a moment if ever there was one to be serious, was dotted with gags which left his audience cold.

For the avoidance of doubt, I am not suggesting that Johnson should be acquitted of the charge of incompetence on the grounds of diminished responsibility. He knows what he ’ s doing.

But there is a dissonance there that stops him really grasping that the most basic tenet of leadership: that with great power comes responsibility.