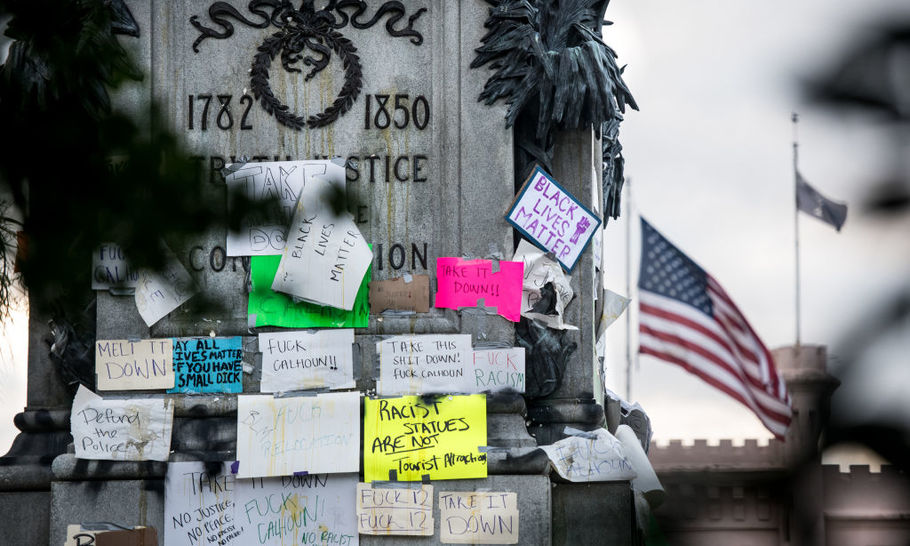 Britain’s memory wars have opened up new fronts. The David Hume Tower in George Square at Edinburgh University will be re-named, after Hume was identified as problematic. The Colston Hall in Bristol, named after a slave trader, is also being renamed.

The arguments put forward by opposing sides are perfectly creditable. In Edinburgh, the University’s Race Equality and Anti-Racist Sub-committee found that David Hume’s “comments on matters of race, though not uncommon at the time, rightly cause distress today.” Such would be unlikely to convince the Prime Minister who some time ago tweeted that he takes a dim view of efforts “to edit or censor our past. We cannot pretend to have a different history.” With no armistice in sight, both parties might frame a debate if, instead of talking past each other, they agreed at least on rules of engagement.

Tony Rees, the Mayor of Bristol, is a former Global Fellow at Yale University. He might take his cue from Yale’s approach to renaming one of its residential colleges, Calhoun College.

When back in 1931 the University named the college after John Calhoun (1782 – 1850), Calhoun’s reputation was unimpeachable. He was a graduate of Yale, a Vice President, and a constitutional jurist. That Calhoun had put his legal expertise in the service of Southern states’ objections to federal interference, that that objection had extended to the right to uphold slavery, and that his stance had incontestably contributed to the outbreak of the Civil War — none of this weighed on the minds of the committee bestowing this honour on his memory.

Conceivably, his pro-slavery stance might even have militated in his favour, since honouring Calhoun might have shown that the US had put yesteryear’s enmity behind it. On Yale’s memorial to graduates who fell in the Civil War, after all, Unionists feature alongside Confederates. By the 1950s the reputation of John Calhoun reached its zenith. John F. Kennedy wrote admiring words about Calhoun in Profiles in Courage, a collection of essays on eminent Americans. No umbrage was taken by critics. In fact, Profiles in Courage won a Pulitzer Prize.

In the 1960s, Yale began admitting minority students, and still the renown of John Calhoun as an eminent graduate of Yale was secure. In the 1970s, Yale appointed Professor Charles Davis as Master of Calhoun College, a symbolic choice on several levels. For what better way was there to show that the country had moved on, than by handing the keys of the Master’s suite to Davis, himself of African-American descent and a pioneer of African-American Studies? But such quiescence was not to last.

Calls for removing Calhoun’s name became louder in the 1980s, and grew more insistent against a backdrop of rising racial tension. But Yale held on to Calhoun’s name as late as 2015, when Yale’s president decreed that removal would “obscure… the legacy of slavery rather than address… it.” Yale by now was going against the tide. One example of many was Georgetown University, where in 2015 two buildings were renamed after discovering that their donors had funded them with proceeds from the sale of 272 slaves. Yale at last gave way and a new name was found for Calhoun College. But new controversies flared up on campus when it came to light that another Yale college namesake, Ezra Stiles, had been a slave owner. It was clear that a transparent process on naming buildings was lacking. Yale asked a committee to fill this gap, and its report of the Committee to establish principles on renaming is in the public domain.

The Committee held that there is a presumption against renaming. As the dedication of a building sends a message linking one generation of graduates to generations of graduates in future, no intervening link in this chain ought to take lightly the decision to stop its transmission. The presumption against change is strongest where the named individual benefited the university “either through their work or by contributing resources that help the University pursue its mission.” In other words, it is up to renamers to make the case.

The Committee set four tests. First, did censure apply to a namesake’s principal legacy, rather than any aspect of their work seen in isolation? Second, did the attitudes of a namesake stand out against the context of their time, especially if those attitudes were not contested at the time? Third, was the motivation for naming a building at odds with the mission of the university? Fourth, did the name of a building foster a sense of community amongst former and future students?

Even if renaming were to be approved, such should not erase or distort history. It would be incumbent on an institution to acknowledge that “changing a name in one place may impose obligations of preservation in others.” In the case of Ezra Stiles College, Yale did not alter the name but installed plaques to commemorate the slave he owned.

While the committee harbored no illusion that consent to process did not preclude dissent over outcomes, it acknowledged the legitimacy in principle of challenging nomenclature. The Committee recommended “a formal process for considering whether to alter a building name on account of the values associated with its namesake; such a process should incorporate community input and scholarly expertise.”

Changing namesakes has ever been an integral aspect of history. In ancient Egypt, pharaohs had the names of their predecessors chiselled out from walls. But like so much else in history, changes did not always go to plan. In ancient Rome, the first Christian emperor, Constantine the Great, thought it fitting to dedicate the day of the week named for Rome’s highest pagan deity, sol invictus, to the name of the Lord, but as his instruction was lost in translation in some regions, Italians refer to domenica and Britons to Sunday. In other instances, changes go back and forth. In modern Russia, prevailing ideologies dictated a switch in the name from St Petersburg to Leningrad and back again.

Debates over the past do not go away. They move on to focus on other vestiges of historical memory. At Yale, a collateral effect was to replace the traditional nomenclature of a college being led by a Master, a designation felt to be tainted by association with plantation hierarchy, with Head of College. It should be clear to anyone denying the right to change names of buildings that debates over interpretations of the past are coloured by the way they are handled in the present.