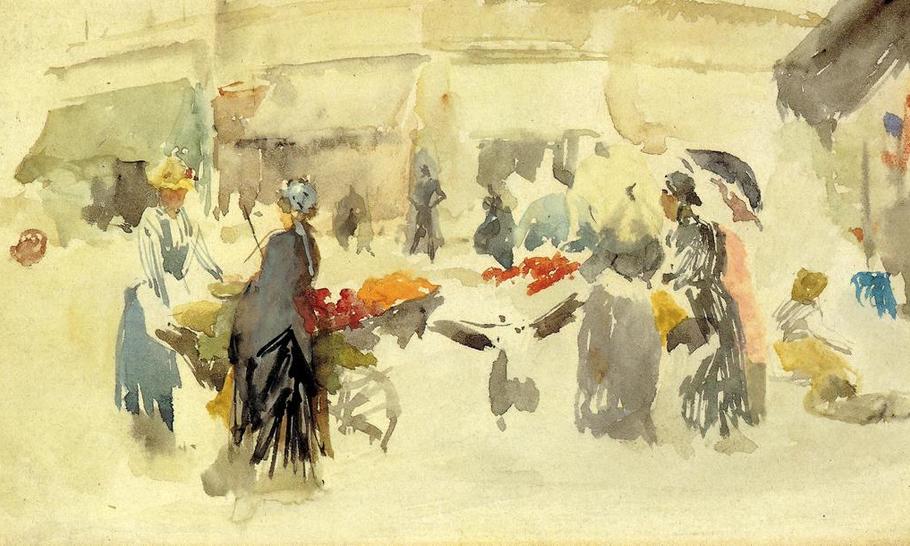 For some nineteenth century artists, the natural world didn’t come easy. The American painter James McNeill Whistler (1834-1903) despaired at his early attempts to capture it. Instead of grand paintings he managed only rough sketches. “I am not working quickly enough!” he complained to a friend in 1862. “A piece of floating drapery – a wave – a cloud – it’s there for a moment – and then it’s gone for ever!” In time, he adopted a different, more poetic approach to combat the transience of nature, as evidenced in his haunting London Nocturnes, his vivid European coastal and pastoral scenes, and his exquisite snapshots of garden life. Here, nature was not pinned down and tamed through the fine lines and clear views of literal representation; instead it remained wildly abstract, its mystery its majesty rendered through streaks, haze, shadows and no end of blurred outlines.

But think of Whistler and it isn’t usually nature that comes to mind. And yet a new exhibition at the Fitzwilliam Museum in Cambridge entitled “Whistler and Nature” sets out to explore the artist’s relationship with the natural world and its influence on his work. Shortly after setting foot in the first room, both the intrigued visitor and the sceptic would be justified in branding that title a misnomer. For the first series of pictures, all diminutive early-career etchings, prioritise people over place. A self-portrait of the artist shows him wearing a floppy dandy hat and resembling a young Robert Louis Stevenson. The Music Room (1859) presents three figures reading, sewing and relaxing while bathed in a diffused light created by an arrangement of hatched and cross-hatched lines. But Seymour standing under a Tree (1858-9), one of the few outdoors pictures in this section, gives us a taste of things to come. This etching of a boy in Greenwich Park is emblematic of the nature most often depicted in Whistler’s work: namely more urban landscape than natural landscape; nature but with the encroachment of man-made structures and the involvement of human forms.

What this exhibition really showcases, then, is what Whistler termed “nature at the margins”. Both the exhibition catalogue and the captions accompanying the works make the argument that Whistler’s vision of nature was shaped by his origins and formative experience: his father’s profession of military engineer required the family to regularly up sticks, travel America and visit Russia and Britain; while Whistler’s own training as a military mapmaker honed his topographical skills and developed his visual understanding of urban layouts.

We see the fruits of these labours in another section of early etchings, this one devoted to working life on the Thames. Made mostly in 1859 and 1861 and known collectively as the “Thames Set”, these pictures reinforce the idea that Whistler’s view of nature often incorporated signs of human activity or endeavour. In these striking pictures, each a contradictory mix of messy sketching and clean black lines, he depicts wharves, harbours, bridges, barges and ships. In Millbank and The Little Pool, foreground figures mooch around or look out at the cluttered backgrounds: the tangles of masts and rigging, the higgledy-piggledy warehouses, and the ceaseless smoke from chimneys.

A section of late seascapes contains pictures shorn of people and productivity. The oil Cliffs and Breakers (1884), produced after an expedition to Cornwall, presents calmer waters by means of long, languorously applied horizontal strokes, while to the side, in a flourish of deft brushstrokes, white waves break the serenity and crash against projecting headland. The watercolour Off the Dutch Coast (1887) conveys the grey-blue choppy swells of the North Sea. But gradually people begin to reappear in these paintings, either in the fringes – such as the couple promenading along the beach in The Shore, Pourville (1899) – or as the main focus. After a fashion we are back to where we began, contemplating works with little or no association with nature: architectural wonders in the moody black and white Venice pictures; images of semi-draped studio models and dancers; the stunning, full-frontal head-to-toe portrait Sketch for “Annabel Lee”.

But an exhibition is not a write-off just because it fails to live up to its title. If we take it not for what it purports to be about (Whistler and nature) but for what it really is (a pick-and-mix overview of Whistler’s output) then no one is likely to leave disappointed. Indeed, there is much to admire and even more to enjoy here. Battersea Reach from Lindsey Houses (1864-71) features a clutch of women gazing out at the Thames through sickly pea-souper fog and lashings of sea-spray. Hazy industrial buildings hug the distant shore. The river is made up of thin layers of liquefied paint (“like breath on the surface of a pane of glass” according to Whistler) while those figures with their parasols and kimono-esque robes signal an influence of Japonisme. In the other standout piece, the sole Nocturne on view from 1875-7, two amorphous forms, vaguely shipshape, seem to emerge from the green-blue surface of the river. Later sections reveal stark contrasts of light and shade. For the former, we are uplifted by Whistler’s lithographs of carefree scenes in the Luxemburg Gardens. For the latter, we are shaken by his gloomy, late-period impressions of the Thames and Waterloo Bridge, as observed from the room he shared at the Savoy with his dying wife – all of them a far cry from the earlier, more vibrant pictures in the “Thames Set”.

This is a relatively compact exhibition, the 90 works on display fitting easily into two rooms. Those wanting more – a whole suite of Nocturnes, perhaps, or a selection of big, dramatic landscapes rather than small, fiddly portraits – or expecting the exhibition to do exactly what it says on the tin, will no doubt grumble. The rest of us will find enough rewards. After viewing its few but indisputable masterpieces, we may even have the same artistic response as Whistler’s friend, Henry James. On seeing one of Whistler’s works at a portrait exhibition in the Grafton Galleries in 1897, he declared: “to turn from his picture to the rest of the show is to drop from the world of distinction, of perception, of beauty and mystery and perpetuity, into – well, a very ordinary place.”

Whistler and Nature is exhibited at the Fitzwilliam Museum, Cambridge until March 17. For more information, click here.

Whistler and Nature by Patricia de Montfort and Clare A.P. Willsdon, published by Paul Holberton Publishing, is out now.