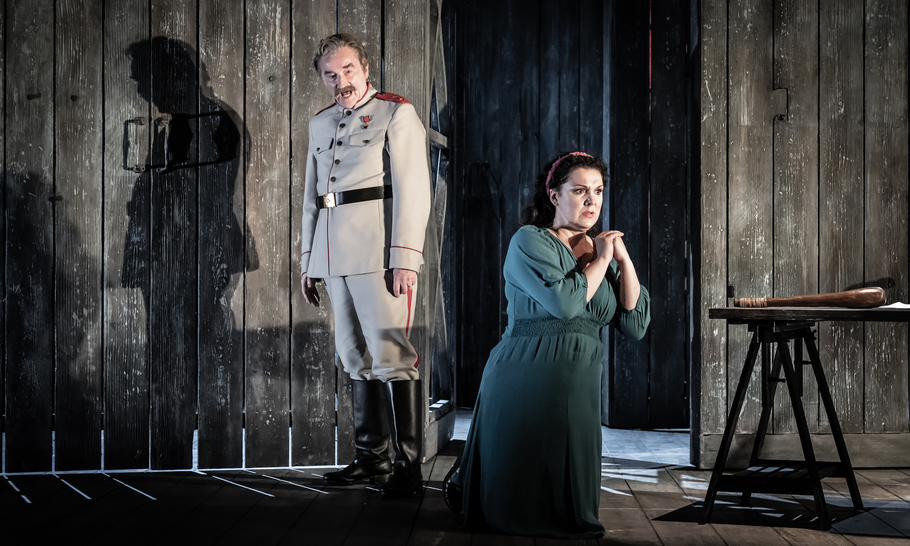 Grange Park Opera’s founder and CEO Wasfi Kani came on stage before the performance to address the audience, asking us to compare Ivan IV (“the Terrible”) of Russia with his contemporary, England’s Henry VIII. In her opinion the latter was more ruthless. She thus prepared us to sympathise with the great Tsar of Russia, who, in the final act, finds himself face to face with his own daughter, Olga. She believes her parents to be the ones who brought her up, but later learns that her real mother was her supposed mother’s sister. When she meets Tsar Ivan towards the end, he knows who she is, but she never learns he is her real father.

Heady stuff, and the centrality of Olga gives the opera its usual Russian title The Maid of Pskov. The city of Pskov, near the current border of Latvia and Estonia, was once capital of its own republic and an important trading outpost closely connected to the Hanseatic League. This free trade league included more Western cities, such as Hamburg and Bremen, still proud of an independence reflected in their car registration plates HH and HB (H for Hansestadt). As the opera explains, Tsar Ivan has already forced Novgorod, slightly further east, firmly within his rule, and intends the same with Pskov. The people fear the wrath of the Tsar against rebels, who were summarily executed in Novgorod, including mothers and babies thrown from a bridge into the river.

Rimsky-Korsakov wrote three versions of the opera and 30 years after he began it, wrote a one-act prologue: The Noblewoman Vera Sheloga. This is set in 1555, 20 years before the main action of the opera, and shows Vera caught unawares by her husband’s sudden return from a year at war. She passes off baby Olga as belonging to her sister Nadezhda. The style of the prologue feels more like the opening scenes of Tchaikovsky’s Eugene Onegin, while the opera itself shows bolder and more assertive colours.

The director, David Pountney, explains how Ivan saw himself as shepherd of a single flock, determined to incorporate the free cities Pskov and Novgorod into the Russian State. Like the Bolsheviks he saw violence as “progressive — sweeping away the evils of the past”, so no surprise that while the cast are dressed in traditional Russian style, Ivan throws off his cloak to appear in the smart uniform sported by Stalin.

Representing the Tsar himself was Clive Bayley, his stage presence and rich bass exuding a formidable power needing no overt expression. As Olga, the Russian soprano Evelina Dobračeva, now resident in Germany, sang superbly, showing mildness and subservience to the Tsar and father of the Russian people, along with a devotion to her beloved rebel Tucha (boldly sung by tenor Carl Tanner). Her “father” Prince Tokmakov (David Shipley) has arranged her marriage to the awful Boyar Matuta (Adrian Thompson), and when she explains the situation to Tsar Ivan he dismisses Matuta, who brings information on the rebellion arranged by Tucha, and decides merely to imprison the rebel rather than execute him.

While Tucha and the Tsar live on, Olga is shot in the confusion. Even the Tsar’s power cannot save the life of his daughter. He calls for a doctor to revive her, but it is too late. Wielding a clear and expressive baton over a large cast and relatively sparse chorus was Russian conductor Mikhail Tatarnikov, conducting the Gascoigne orchestra, which up to 2018 performed for 25 years as the Garsington Opera Orchestra.

As an expression of Russia’s founding history, this production is riveting, and I look forward with anticipation to more recent history in Grange Park Opera’s forthcoming opera by Anthony Bolton: The Life and Death of Litvinenko.