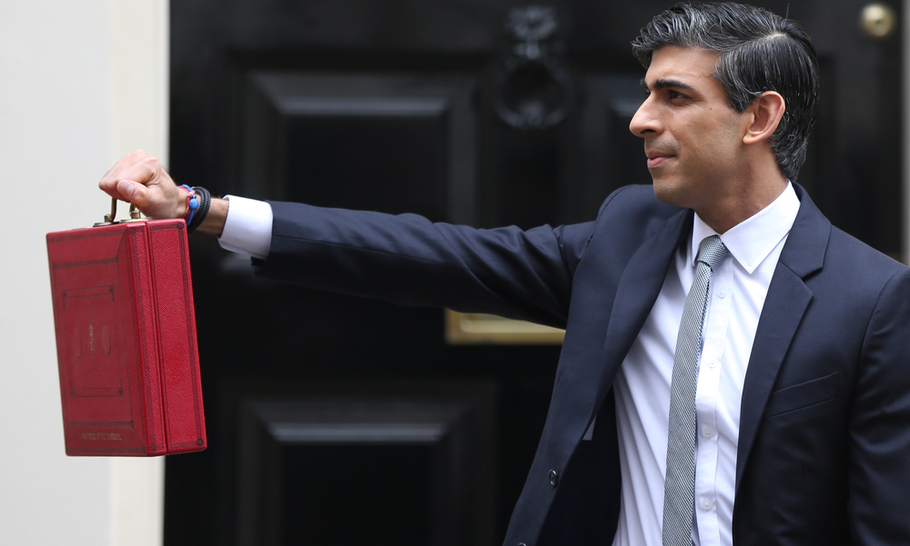 Most people have put on a few Covid kilos during the pandemic. Our rake-thin Chancellor is unlikely to be one of them. An emaciated economy remains on starvation rations. Yet the public sector for which he is directly responsible has ballooned over the past year. And its girth shows every sign of continuing to expand long after the crisis that fed its appetite has receded.

In his second coronavirus Budget, Rishi Sunak has stolen Boris Johnson’s mantle as a have-your-cake-and-eat-it man. He has raised the tax burden to 35 per cent of GDP, heights not seen since the crisis-ridden, Labour-dominated 1960s, while proclaiming his credentials as a low-tax, small-state Tory. He has opened the public purse to the private sector with one hand, while snatching his baubles away with the other.

What happened to the talk of Singapore-on-Thames? The corporation tax rate in Asia’s offshore haven is 17 per cent. In neighbouring Ireland, it is even lower: 12.5 per cent. Here it is 19 per cent — but instead of making Britain more competitive, the Chancellor will raise the rate in stages to 25 per cent. This Government was elected to get Brexit done, giving it greater freedom of manoeuvre than at any time for half a century. Yet how has he used that freedom? The signal it has just sent to Continental or American companies unhappy with their own even higher business taxes is: don’t even think about relocating here.

This impression is all the more unfortunate, given that the Budget did contain one new business-friendly idea, of which its author is justifiably proud. The “super-deduction” scheme, which he claims is “the biggest business tax cut in modern British history”, enables investors to offset 130 per cent of the cost against their tax bill. Covid has indeed caused an investment famine. If this incentive to take risks again had been the centrepiece of the Budget, it would have given the recovery a real boost. Instead, the headlines were grabbed by the corporation tax hike plus the freezing of income tax allowances. What investment requires is confidence. Confidence depends on consistency. But this mixed message tells venture capitalists that this Government, like its Tory predecessors, is as likely as not to raise taxes — as a private study commissioned by the Chancellor reportedly showed him.

Indeed, in his reply to the Budget, Sir Keir Starmer was clearly casting about for something to disagree with. “Nothing for the poor” was his best line, but it was an unconvincing one. The Budget has, in effect, turned the £20 a week emergency bonus for those on Universal Credit into a permanent rise.

There are, of course, political reasons why Rishi Sunak passed up his opportunity to emulate Nigel Lawson’s tax-cutting Budgets of the mid-1980s, which helped to unleash the Thatcher revolution that made the economy a beacon of prosperity — a truly “Global Britain”. Sunak has taken instead as his model more conventional tax-and-spend Chancellors, such as Roy Jenkins, Kenneth Clarke, Alistair Darling and George Osborne — all of whom dealt with economic crises by raising taxes. The only postwar period when “levelling up” actually occurred was during the small-state Thatcher era, but the international economic orthodoxy today is that big government is back — and the Treasury has persuaded the politicians to go with the flow.

So ministerial empires can continue to grow, secure in the knowledge that the state has become the nation’s comfort zone. Universities report a sharp rise in students applying for degrees that equip them to work in the public sector. It may be no bad thing that more of our finite pool of talent has been diverted from the City to Whitehall, given the latter’s initially incoherent response to the pandemic. Though the colossal success of the vaccination programme is bound to inspire many young people to pursue a life of public service, however, they should also be reminded that Kate Bingham, the woman who led the Vaccine Taskforce, is a venture capitalist, with phenomenal energy and a string of drug discoveries to her name. Her husband, Jesse Norman, is Financial Secretary to the Treasury — and a distinguished intellectual who makes an eloquent case for conservatism. It is too easy for the young to absorb the glib assumption that “public” equals “good”, while “private” is code for “selfish”. The real lesson of the vaccine story is that it is sometimes necessary to take calculated risks, especially in the midst of a global crisis.

Indeed, in the wake of the pandemic Britain’s bloated public sector actually cries out for drastic reform. There can be no justification for squeezing taxpayers — a million more of whom will be caught in the higher rate net due to the freeze on allowances — while most employees of the state continue to enjoy job security and increasingly costly pensions. In particular, these gold-plated pensions are an anachronism. They belong to the era of “the gentleman in Whitehall knows best”, when he (it usually was a he because women who married were sacked) went to work in a bowler hat, carrying a rolled-up umbrella and a sense of entitlement that justified final salary pensions as compensation for lower salaries than his private sector counterparts.

That world has long gone and its assumptions with it, but the burden of unfunded civil service, NHS and teachers’ pensions still weighs heavily on the public purse. According to an Intergenerational Foundation study in 2019, some 115,000 retired government employees received more than the average wage of £28,600 per annum. At the top end, 373 individuals received over £100,000 a year, at a time when the state pension was only £8,500. According to ONS figures, by 2015 total liabilities for unfunded, defined benefit public sector pension schemes was £917 billion, then 49 per cent of GDP. The cost of these unfunded public sector pensions has doubled in the last seven years. Unless the Government grasps the nettle, it is these liabilities — not the cost of Covid — that will bankrupt the public finances. Those who work in the public sector must be persuaded to pay for their own pensions, just as those in the private sector do.

The task of reforming the public sector goes far beyond pensions, but this is a good place to start. The Budget added insult to the injuries sustained by the private sector during the pandemic. Now it is time for the Government to make the case for the public sector to shoulder its share of the burden.