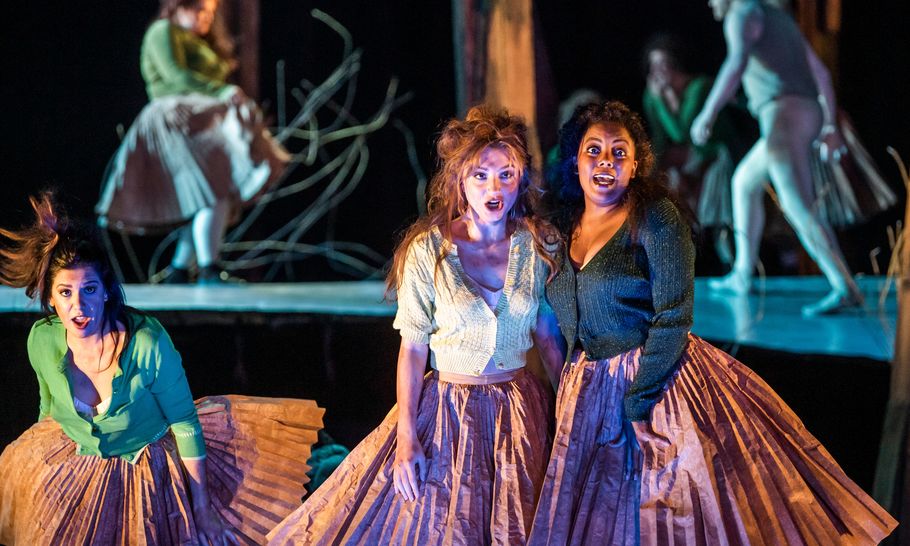 Glyndebourne’s illuminating staging of Dvořák’s most popular opera is simply wonderful. It avoids specific interpretations and allows the music to speak of natural forces beyond the human realm — surely a theme for our times.

The story is that the water-sprite Rusalka yearns to be human and be loved by the Prince, who bathes in her waters while out hunting. The witch Ježibaba effects the transformation, but because the human Rusalka is unable to speak, the Prince’s court rejects her, and so in time does he. When she returns to her watery world it rejects her too unless she kills the prince. Unwilling to do so, she can no longer join her joyous sisters, and is doomed to become a mere spirit of death in the deep waters of the lake. When the prince later seeks her out and yearns for one last kiss it is the end of him.

The marvellous libretto by Jaroslav Kvapil, based on Fouqué’s Undine (as was the ballet of that name, which Ashton created for Margot Fonteyn), brought huge inspiration to Dvořák. From the famous Song to the Moon in Act I, when Rusalka appeals to this guardian of the night to guide her lover towards her, to the heights of Act III that foreshadow Richard Strauss’s great Frau ohne Schatten written nearly twenty years later, Robin Ticciati with the London Philharmonic brings out the astringency, the lyrical beauty and the sheer magic of this music. His conducting was a revelation.

And the singing was superb. As Rusalka herself, Sally Matthews was perfection, her phrasing and clarity of tone bringing out the purity of this water creature that can never quite become warm flesh and blood, and her interaction with the excellent Russian bass Alexander Roslavets as her father Vodnik showed the beauty of love and loss in their relationship. As the Prince, young American tenor Evan LeRoy Johnson sang with huge passion, his ringing tone emphasising a nobility of intent that only deserts him under the Act II influence of the Foreign Princess, strongly sung by Russian soprano Zoya Tsererina.

As the witch Ježibaba, who tears out organs from living animals in the sorcery scene, Patricia Bardon showed great depth of tone, and the other solo roles were superbly sung: Colin Judson as the gamekeeper, Alix Le Saux as his niece the kitchen girl, Adam Marsden as the Hunter, to say nothing of the fine wood nymphs Vavu Mpofu, Anna Pennisi and Alyona Abramova. The chorus too was excellent, bringing real joy and bounce to their earlier simple life in the lake, and pathos to their later sad rejection of Rusalka. In their roles as wood nymphs, wedding guests and rusalki they added enormously to the atmosphere of natural magic that imbues this story.

The word rusalka in Czech means water-sprite (in Russian mermaid), but its etymology is far older: rus has an ancient Indo-European origin meaning dew or humidity. If we regard ourselves today as beyond the early mystery of unknown forces, we are mistaken, and this opera acquires layers of meaning that only music can reach. Melly Still staged it ten years ago at Glyndebourne, but do not wait another ten to see one of their finest productions in recent years.