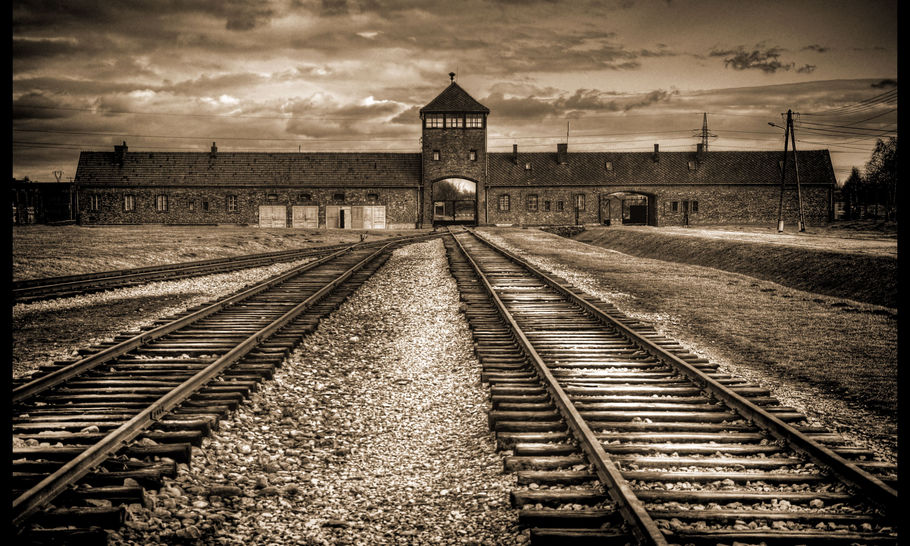 Seeing Auschwitz at 81 Old Brompton Road in South Kensington is one of the most moving and original exhibitions of the year. As the curators point out at the beginning of the exhibition, a relatively small number of photographs, nearly all taken by the Nazis, influence how we “see” Auschwitz. Seeing Auschwitz presents the lesser-known photographs, taken by victims themselves, by Nazis in their off-duty moments and aerial photos, taken by the Allies.

Approximately 1.3 million people were deported to Auschwitz. 1.1 million were murdered there. 1 million were Jews and most of these were killed on arrival. 75,000 were ethnic Poles, 21,000 were Roma and Sinti, 15,000 were Soviet POWs and 10-15,000 were political opponents of the Nazi regime. Smaller numbers were gay men, criminals and Jehovah’s Witnesses.

The very first picture captures the sense of chaos as a group of Hungarian Jews arrive at Auschwitz in mid-1944. They look confused, bewildered, in the foreground there is a man with no trousers and just one shoe. It is hard to imagine an image more different from the early accounts of the efficiency of the “Final Solution”. This image speaks of mayhem and disorder. How could the new arrivals possibly make sense of this new world as they arrived hungry, exhausted, hot, after several days in crowded cattle trucks? To think they could have rebelled is obscene.

Most of the early photos in the exhibition are images of the arrival at Auschwitz of huge trainloads of Jews. The emphasis is on scale and chaos. One shows a platform covered with clothes, scattered all over the place, before they have been sorted.

Others show a group of Jews in the Birch Grove, including two pictures of  young children waiting with their mothers. Approximately 90 per cent of all Jewish children in German-occupied Europe were murdered by the collaborators — one of a number of reasons why John Boyne’s bestselling novel, The Boy in Striped Pyjamas, is so misleading.

Other photos show scenes of plunder: inmates sorting out huge piles of shoes and clothes. What is immediately striking is how many of the Jews who arrived at Auschwitz brought huge bundles of possessions.

In April 1945 Lili Jacob, a former inmate at Auschwitz, was in another camp, Dora Mittelbau. She found a photo album. Many of the photos in the album were taken on the very day she had arrived at Auschwitz-Birkenau in May 1944. In these photos she recognised her murdered brothers, Israel (9) and Zelig (11) and many other members of her family: her grandparents, her Aunt Tauba with four of her children, and a photo of Lili herself, with her head shaven.

As well as photos, there are blown-up details from photos. They show a woman and a young boy talking, their arms linked; a man helping a young woman with a bundle on her back; a prisoner in striped uniform risking his life to talk to a young woman who has just arrived. Is he giving her a hurried word of advice, as some did? They told mothers to hand their children over to grandparents so the mothers would stand some small chance of surviving or they told teenage boys to claim the were older than they really were and had a skill so they might be saved. By contrast, there are also photos of the “unproductive”: the sick and the elderly, unable to work in the factories and so killed immediately.

Most dramatic of all, are the photos taken by prisoners forced to work in the Sonderkommandos through the open door of a gas chamber and of Crematorium 5. There are also photos of bodies being burned in open pits and of women being driven naked towards the gas chambers. A roll of photographic film was smuggled out of Auschwitz by the camp resistance in September 1944, four months before the camp was liberated by the Red Army.

As well as photos there are seventy drawings from the sketchbook of a prisoner and drawings of the gas chambers and crematoria by the only member of a Sonderkommando who was a trained artist, drawn when he returned to France after the war.

Then there is a deeply moving photo of one of the death marches taken by Benno Gastner, then fourteen years old, in May 1945. The Jews are covered in threadbare blankets, wearing striped uniforms and shoes. There are also photos of Jews from two communities in southern Poland, taken before the war: a mother with her newborn baby, a couple at their wedding.

The exhibition is an original creation by Musealia, in collaboration with the Auschwitz-Birkenau State Museum. A panel of curators of renowned experts in the history of Auschwitz-Birkenau and in Holocaust education was brought together to prepare it: Paul Salmons (chief curator), Robert Jan van Pelt (Holocaust historian and author of Auschwitz, 1270 to the Present) and Miriam Greenbaum (co-author of Auschwitz: Not Long Ago. Not Far Away). The sketches and photographs are deeply moving and the accompanying sketches are illuminating. The exhibition will change the way you think about Auschwitz and the Holocaust. One word of advice: when you look online, make sure you book for the first available slot at 10 am before it gets too crowded.