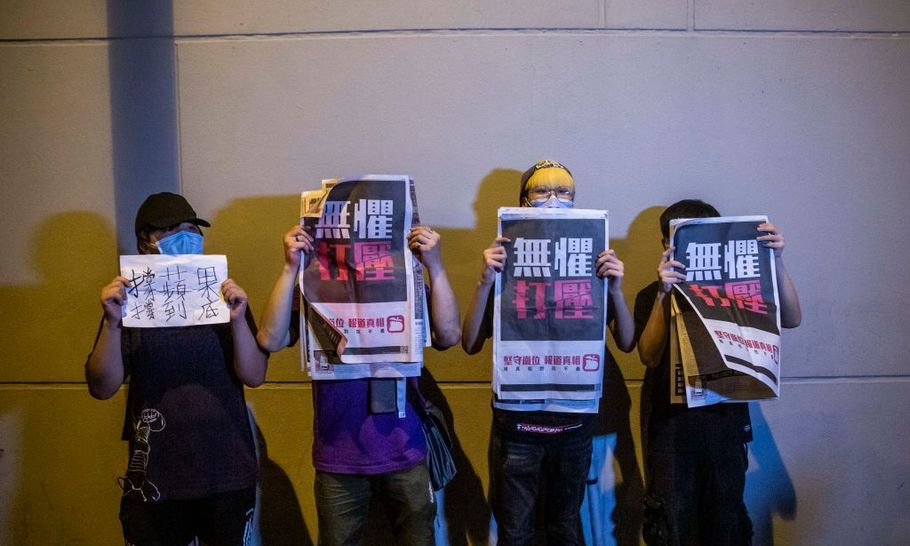 Earlier this week Jimmy Lai, the Hong Kong pro-democracy campaigner and owner of the brash tabloid newspaper Apple Daily, was arrested under Beijing’s draconian new security law. He is accused of colluding with a foreign power. That power, unsurprisingly, is the US. Lai’s arrest is confirmation, if confirmation were needed, that China has binned the “One Country Two Systems” agreement 27 years ahead of schedule. The territory and its 7.5 million residents have in effect now been absorbed into the Chinese mainland. Lai could be tried there.

What amounts to a coup by Beijing also bodes ill for Hong Kong’s role as an international financial centre. Without freedom of information you cannot sustain a healthy, free enterprise economy let alone uphold human rights. The free flow of information is the oxygen that keeps these things alive. Lai’s arrest and the very public intimidation of staff at the Apple Daily by police marching through the newsroom, rifling through papers and confiscating computers, was a clear signal that President Xi Jinping cares little for what the rest of the world thinks. Crushing dissent is his top priority. He is in good company.

For the first time since 2001 there are more autocracies than democracies in the world. Snuffing out the free press is an early sign of growing authoritarianism. It is the canary in the coal mine. Around the globe, press freedom is under threat. Publishers, editors and newsrooms are being intimidated, reporters targeted and even assassinated. The desire by governments to set the news agenda is of course universal. News management is part of modern government. Censorship can take many forms: some brutal, some couched in a more nuanced, legal guise.

To start at the soft end of the spectrum, Britain’s press is free. But its freedom is not immune to government efforts to circumscribe it. The proposed new Espionage Act, intended to replace the 1911 Official Secrets Act, is a case in point. The proposals, given new impetus by Russian meddling in British public life, could place whistleblowers on the same footing as spies.

The Law Commission, charged with drawing up proposals, suggests that the term “espionage” should be widened to include obtaining “sensitive information” and passing it on to third parties. This includes information that might affect the country’s “economic wellbeing” which is a worryingly vague definition. News organisations that publish stories based on leaked or confidential documents would be at risk of prosecution. The Guardian’s NSA files leaked by Edward Snowden is an obvious example. Any leak from Whitehall or the state sector could potentially be liable. Whistle blowers in the NHS, considered rightly as a strategic sector, could also be targeted.

Covid-19 and the Black Lives Matter protests have moved governments to find ways of heading off criticism. A favoured tactic is to frame the debate as a choice between “irresponsible journalism’ and patriotism. The attacks on reporters and camera crews in the US documenting the unrest after the killing of George Floyd were alarming.  When the President of the United States, declares “I am your President of law and order” and brands reporters as “enemies of the people” it’s a license for every cop with a grudge to lash out when he thinks he can get away with it.

It is sometimes said that democracy guarantees freedom of information. In reality it is the other way round. Take India, often referred to as the world’s largest democracy. Under Prime Minister Narendra Modi, the country has slipped to 142nd in the World Press Freedom Index. Just before announcing the lockdown he told a video conference with 20 owners and editors that it was “important to tackle the spread of pessimism, negativity and rumour”.

India has a highly-regarded and vibrant free press. Indian journalists are passionate about their role in upholding the country’s democratic traditions and free speech is protected by the constitution. But increasingly journalists are leant on to toe the government line. Journalists in Kashmir, where the internet and mobile networks have been shut down, are routinely harassed, or detained on trumped-up charges in an attempt to stifle coverage of unrest.

The past few years suggest the censorship spectrum is steadily shifting towards the harder end. The number of journalists deliberately killed — both citizen journalist and mainstream media — is rising. The number in prison is at a record high. Xi is firmly in the hard-line club. Members include North Korea, Iran and Saudi Arabia. It’s a club that regards journalists either as allies or enemies. You either work for the state or face the consequences.

Journalists are soft targets. They (we) are not especially popular, often with good reason. But this gives authoritarian governments license to go after them with impunity. They judge that the international community’s commercial interests will almost always trump its desire to defend human rights. Jamal Khashoggi, the Saudi Washington Post columnist who was killed and dismembered in the Saudi consulate in Istanbul in 2018 was perhaps the most shocking example of this callousness. Saudi’s powerful Crown Prince judged that the West cared more about juicy contracts with his country than free speech. So far, he has been proved correct. Xi has made the same calculation about press freedom in Hong Kong.

Targeting journalists because of the work they do is a relatively new phenomenon. Risk was always part of the job description. I have had a few close calls covering conflicts. But I never felt I was the prey. This has changed. Journalists are now routinely in the crosshairs of governments who don’t like what they do. Sometimes colluding with organised criminals, states have refined their means of silencing journalists: civil or criminal legal actions, surveillance, censorship, financial threats (such as withdrawing state advertising), as well as more intimidation — and murder.

Marie Colvin, of the Sunday Times, was killed in the Syrian city of Homs. She was intentionally targeted by the Assad regime. Daphne Caruana Galizia, the Maltese investigative journalist, was flooded with lawsuits by companies, government officials and individuals before she was finally silenced by a car bomb.

Russia is among the most dangerous places for journalists to work freely. Awkward questions routinely invite retaliation and sometimes death. Since 1993 some 165 journalists have been murdered Reporters Without Borders believes either by agents of the state or the Russian mafia. Beneath a thin veneer of freedom, websites are routinely blocked, news outlets throttled out of existence and journalists arrested on trumped up charges. Most murders and violent attacks on journalists go unpunished.

Europe is not immune to creeping censorship. Pawel Lewandowski the Polish deputy culture minister recently said. “The media is a type of state power. We must have 100 per cent certainty that everything that happens in Poland is overseen by the Polish authorities”. On election day in October 2017, the Czech president Miloš Zeman held up a mock assault rifle at a press conference with an inscription that was translated as “At journalists”. Both Poland and the Czech Republic are EU members.

Two years ago, two journalists in Northern Ireland, Trevor Birney and Barry McCaffrey, were arrested, and their homes and offices were searched by Ulster police. Documents had been leaked to them from the Northern Ireland police ombudsman into the pub massacre in 1994 by members of the loyalist paramilitary group, the Ulster Volunteer Force. Three appeal judges quashed the warrants last year.

This tightening chokehold over free speech comes at a time when the mainstream media is uniquely vulnerable: first from the challenge posed by (free) citizen journalism; second by the severe economic headwinds which have forced newsrooms around the world to make deep cuts. The collapse in advertising revenue and the availability of instant news on smartphones has steadily whittled down sales and subscriptions. Titles are held increasingly by fewer big corporations often run by powerful figures with their own political agenda, or privately-owned by government cronies. Local newspapers have been decimated. The truth is being monopolised.

The traditional model of journalism — asking hard questions, finding things out and setting them in context — has been upended by the digital revolution. The depth of the challenge cannot be overstated. News is not cheap. Finding things out is not cheap, or without risks. Sending a reporter into a conflict zone or mounting an investigation represents a big commitment of resources, often with no guarantee of success. If information is to be trusted it has to have been through a rigorous process of checks. Few have the resources to do this. Conversely the number of fake news outlets, state trolls and propaganda outfits is rising exponentially.

This piece is not intended to defend poor, unethical or biased journalism, of which there is a lot, or to make a special case for respecting the safety of reporters. Risk, as I say, comes with the territory. Holding the media to account is as important as holding politicians or corporations to account. The press has no special rights. Where it gets things wrong it must face the consequences.

But information is power. Disseminating information critically is journalism’s first responsibility. Finding things out by shining a light in dark corners is the best protection we have of our freedoms. It is crucial to the proper functioning not just of the democratic process but of free markets, science and public health systems as we have seen in the Covid-19 crisis.

Cutting the press down to size is an itch that British governments of all hues occasionally need to scratch. We can argue about what is and what is not in the public interest. But arguing that restricting freedom of speech and the free flow of information makes us safer or more democratic is a self-serving and dangerous fallacy.